The winner of this year’s automotive category, and the winner of the C2I 2019 Grand Prix trophy, is a UK developed magnet-free electric motor that holds huge promise for the growing electric vehicle sector. 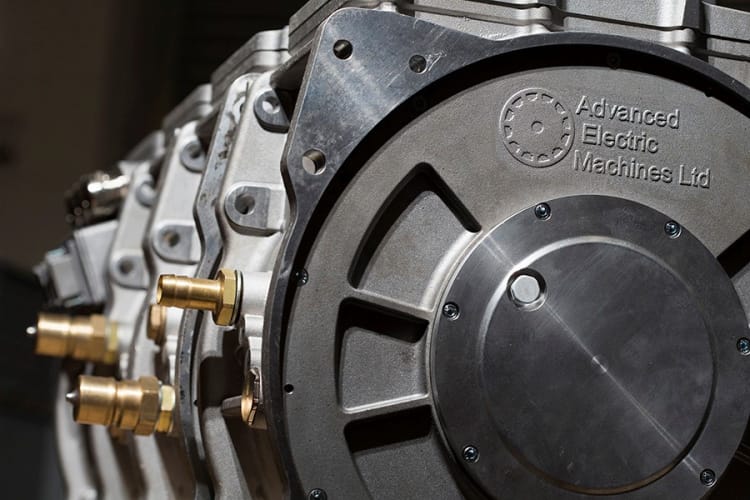 The culmination of six years of research, the High Density Switched Reluctance Motor (HDSRM) has recently gone into production and will be powering commercial vehicles on the road within months.

The project is led by Advanced Electric Machines (AEM), a spin-out company from Newcastle University, in collaboration with commercial vehicle maker Tevva Motors, the university itself, and software specialist Motor Design.

Among the motor’s main attributes is the elimination both of rare earth permanent magnets and copper, both of which make end of life disposal more difficult.

The motor is expected to be used in a wide range of applications, but initial development has focused on the commercial vehicle market.

Commercial vehicles have to cope with higher utilisation than passenger cars. They often operate at the peak of their performance range for hours at a time, covering a large number of motorway miles. A robust technology which can operate at peak efficiency for long durations is therefore needed. The commercial vehicle sector is also heavily focused on total cost of ownership. AEM believes that successful electric vehicle technologies will be those that provide cost savings as well as environmental benefits. This means taking into account efficiency in operation, the cost of servicing and disposal costs.

Up to now, electric vehicles have used permanent magnet motors. Advanced Electric Machines chief executive Dr James Widmer said: “It struck us that the automotive industry was heading down the road of building future electric vehicles using materials with associated problems in the short, medium and long term.” These include rare earth elements used in permanent magnets, as well as copper for the motor windings.

The idea for the HDSRM arose from a PhD thesis in the late 2000s and “appeared to have real potential, especially for commercial vehicles”, said Dr Widmer.

Switched reluctance motors have existed almost as long as the internal combustion engine, but have suffered from weaknesses in performance which have limited their use in electric vehicles.

Unlike common DC motor types, in a switched reluctance motor power is delivered to windings in the stator rather than the rotor. This simplifies mechanical design because power does not have to be delivered to a moving part.

AEM’s breakthrough, the subject of a patent, has been to make it possible to drive the SR motor using the same power electronics as a permanent magnet motor

The rotor is made of a “soft” magnetic material such as laminated steel, with projecting magnetic poles. The stator also has a number of poles. When power is applied to the stator windings, the rotor moves to align the rotor pole with the nearest stator pole. To keep the rotor moving, an electronic control system switches on the windings of successive stator poles ahead of the rotor, so it continues to rotate.

However, switched reluctance motors gained a reputation for being noisy. They also suffered from torque ripple – fluctuations in torque as the rotor rotates – which made them unsuitable for traction applications. They required different power electronics from permanent magnet machines to drive them, which, without economies of scale, were expensive.

First, environmentally, the mining and refinement of rare earth elements pose significant problems if not properly managed, and also produce large quantities of carbon dioxide. Second, China controls more than 90% of the world’s supply of rare earth minerals. Third, rare earth elements are expensive – typically $100/kg (a motor for a vehicle such as the Nissan Leaf needs around 2kg), and prices are volatile, particularly given the current US-China trade war. “So our motor provides like-for-like performance, environmental advantages and cost savings,” says Widmer.

Copper has traditionally been used in motors because it is a good conductor and easy to use. Aluminium is not such a good conductor, is less easy to wind and age-hardens in a different way. However, AEM has also developed a patented manufacturing process that allows aluminium to be used for the windings. Aluminium is a tenth of the price of copper and easier to recycle – because it melts at a lower temperature than steel it can be recovered separately at the end of a motor’s life, whereas copper contaminates the steel.

Another drawback of permanent magnets in conventional motors is that they become demagnetised if they get too hot. In a hybrid vehicle the electric motor needs a separate cooling loop from the internal combustion engine. A switched reluctance motor can be run hotter, and can be cooled by the IC engine cooling system.

A further difference is that permanent magnet motors are never “off”. The motor will always generate either current or torque while rotating. When the HDSRM is not being driven it is truly “off”, and the AEM team has patented a multi-motor design which allows one or more motors to be turned on or off to match vehicle’s a performance requirements at any given time – the electric vehicle equivalent of cylinder deactivation. The multi-motor system can thus be operated at peak efficiency over a much broader part of the vehicle drive cycle.

Nevertheless, despite working on the technology at Newcastle University for several years with large companies, progress towards adoption had been slow. The spin-out company was formed to speed up the pace of development.

It found a partner and lead customer in Tevva Motors. “We needed a partner like Tevva – an innovative technology-driven business focused on EV  technologies for the medium duty commercial vehicle market,” said Dr Widmer.

Tevva has developed and produced a range of technologies – from bespoke battery management systems to a range extender controlled autonomously by cloud-based software – designed to provide solutions for the electrification of the medium duty urban distribution industry. Established in 2013, Tevva realised that increasingly stringent emission regulations meant that this sector was ripe for electrification.

Tevva’s Rex range extender eliminates one of the main barriers to the adoption of electric vehicle technology in the sector – range anxiety – while its smart geofencing system automatically engages and disengages the system depending on where the vehicle is being driven.

Other key collaborators on the project are Newcastle University, which is a shareholder in the AEM and continues to work closely with it. “Without the university the technology would never have been developed,” Dr Widmer said.

And Motor Design, an innovative medium sized company, provides software which sped up development by allowing rapid modelling of motor performance, particularly for predicting how hot it would get.

AEM has production capacity of 12,000 units annually and its motors are being evaluated in other areas, such as marine ancillary power – for winches and the like – and in industry, where they can replace induction motors, working with standard industrial drives. “Anything that can spin a permanent magnet motor will drive our motor,” said Dr Widmer.

The current model is only the first generation, and applications for passenger cars, tractors and agricultural vehicles and in aerospace are being considered.

The automotive category is sponsored by Comsol

Engineering can take inspiration from nature for better prosthetics