We’ve seen a number of initiatives designed to enthuse the next generation of STEM qualified professionals and the Big Bang Fair ranks highly amongst them.

An interesting facet to this year’s event (Birmingham NEC, 16th - 19th March 2016) involves the demonstration of technology aimed at putting the right tools into the hands of tomorrow’s technologists.

The technology comes in the form of the BBC micro:bit pocket-sized computer that will be given to one million Year 7 (11-12 years old) pupils from March 22 in a bid to “inspire digital creativity and develop a new generation of tech pioneers.”

The device is the result of a technology collaboration between 29 organisations including ARM, who join up with colleagues from the BBC this week to demonstrate the new device and its utility in a range of coding projects.

Features of the 4cm x 5cm micro:bit include: accelerometer, magnetometer, Bluetooth Smart Technology (to connect to the internet, other micro:bits, devices, kits, phones, tablets, or cameras), and five I/O rings to connect the micro:bit to devices or sensors using crocodile clips or 4mm banana plugs. 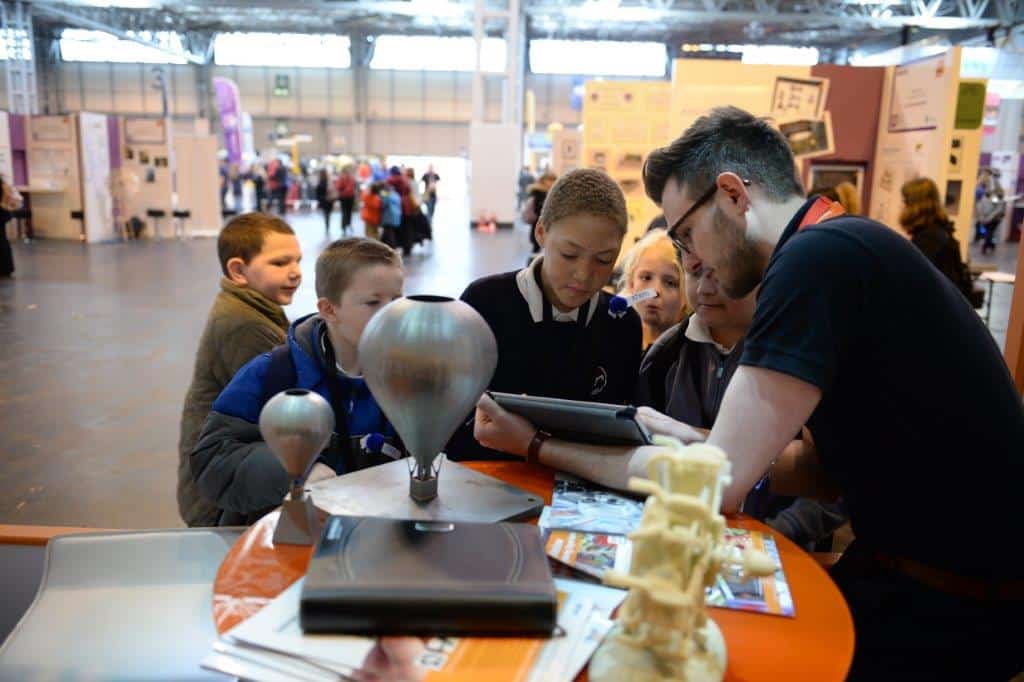 "The BBC micro:bit is all about young people learning to express themselves digitally, and it’s their device to own,” said Sinead Rocks, head of BBC learning on the corporation’s website. "It’s our most ambitious education initiative for 30 years. And as the micro:bit is able to connect to everything from mobile phones to plant pots and Raspberry Pis, this could be for the internet-of-things what the BBC Micro was to the British gaming industry.”

Bold and ambitious in its scope, micro:bit is a noble addition to the myriad of ways in which the education and engineering sectors are working together, an endeavour acknowledged in part by the ‘Partnerships with Education’ Award category of the EEF/Aldermore Future Manufacturing Awards.

This year’s winners were Lambert, a Tadcaster-based provider of automation systems, equipment engineering and precision components that has worked with 1,000 pupils in nearby primary and secondary schools, plus students from colleges and universities.

The company’s eight-year plan has reportedly seen its reputation as an ‘employer of choice’ rise, and it is in the process of recruiting five more apprentices to take its total to 11 employed in the past two years.

The numbers may be modest at Lambert, but national figures indicate a surge in engineering apprentices, say SJD Accountancy.

Further research by CV-Library indicates engineering apprenticeships as the most valued across all sectors, although industry professionals say that a lack of government support is a key issue in raising the profile of such training schemes.

Published to coincide with National Apprenticeship Week, the survey of over 2,000 employees found that

53.6% of engineering professionals had completed an apprenticeship, compared to 21.8% nationwide, making the sector the most popular among apprentices.

Furthermore, 92.3% agreed that the training helped establish their career (and a further 73.1% still work in the industry) and 93.8% said apprentices are the key to filling the sector’s skills gap, but 93.8% of sector workers don’t think the government is doing enough to fund or support apprenticeships.

In a statement, Lee Biggins, founder and managing director of CV-Library, said: “Apprenticeships are extremely valuable for engineering workers and employers – the skills acquired during these schemes can shape a career and also help tackle the industry’s skills shortage.

“However, it seems that this opportunity is being underutilised within the sector – while government funding is on its way via the apprenticeship levy, it’s clear that there is a broader issue at play. The data shows that not enough is being done by the government to raise awareness for apprenticeships and more support is needed for both engineering businesses and apprentices themselves.

“Ultimately, apprentices could plug the engineering sector skills gap if younger workers are educated on the value of apprenticeships and more is done to raise awareness and support.”

What do you think? Let us know below.

Stats on skills and apprenticeships

In the decade to 2022, engineering companies will need 182,000 people a year with engineering skills – this means we need to double the number of apprentices and graduates entering the industry (EngineeringUK 2015)

Between 2012-2022 engineering enterprises will need to recruit around 56,000 engineering technicians per year

If engineering can meet the forecasted demand for new vacancies, it would generate an additional £27bn GDP per year – the equivalent of building 1,800 new secondary schools or 110 new hospitals (EngineeringUK 2016)

Source: The Institution of Civil Engineers