E-Fan X - the joint Rolls-Royce / Airbus hybrid electric aircraft project - may have come to a premature conclusion, but the lessons learned from the cancelled initiative will still have a major influence on the future of green aviation. Jon Excell reports

When Rolls-Royce and Airbus jointly announced the cancellation of their E-Fan X hybrid electric aircraft project at the end of April it seemed fair to ask whether this was an early sign of the aerospace sector abandoning its much-touted low carbon ambitions in the face of a COVID-19 induced battle for survival.

But as Rolls-Royce engineer Riona Armesmith, who heads up the company’s hybrid electric projects, told The Engineer, whilst the experimental aircraft may not be taking to the skies as planned, the technologies developed and lessons learned through the initiative have positioned the UK firm at the forefront of a field that remains key to the sector’s future.

E-Fan X was originally launched in 2017 as part of a drive to explore how new technology could help reduce emissions and ensure that the sector can continue to grow whilst meeting a host of increasingly demanding environmental targets.

I believe in our post-COVID 19 world that people will still want to fly and see other people and make new discoveries....and when the market is ready, the drive to sustainable aviation will resume

Whilst a number of smaller electric aircraft have been developed – including the two-seater Airbus E-Fan - the aim of E-Fan X was to explore the application of hybrid electric technology to a larger passenger aircraft by developing a flying test-bed demonstrator aboard a 100-seater Bae 146 short-haul airliner.

The project would have seen one of the aircraft’s four existing turbofans (LF-507 engines) replaced by a 2MW electric motor driven fan as part of a serial hybrid propulsion system.  This was to be powered by a 2.5MW generator, consisting of a gas turbine and associated 3000V power electronics system, housed in the fuselage of the aircraft. The aircraft’s remaining three engines would operate as normal, thereby enabling the team to test the hybrid system without relying on it to stay in the air.

Armesmith said that whist she actually envisages simpler parallel hybrid systems entering the aviation market first, developing a serial hybrid system of this kind, where the turbine is used purely to generate electric power for the motor,  enabled the engineering team to get to grips with a greater range of challenges. “You learn everything from doing a serial hybrid and you solve far more of the challenges so we can step back to parallel hybrid having worked though all of the challenges.”

As well as reducing emissions, she added that a serial hybrid configuration also opens up some interesting longer-term opportunities to fundamentally redesign aircraft. “Because you’re not trying to install huge gas turbines under the wing of an aircraft, and electric fans are not as hot as gas turbines, closer integration between the aircraft and the engine is more possible.” This could lead, for instance, to aircraft with smaller wings that are better suited to operating from smaller airfields; thereby creating opportunities to reshape transport networks.

Getting to that point, however, is a monumental challenge, and - said Armesmith - an order of magnitude more difficult than developing the kind of hybrid technology now widely used in the automotive sector.  “It’s really about weight,” she said.  “The energy density of batteries is not really comparable to kerosene. Also, if you’re replacing a mechanical system (a gas turbine which drives a fan) with a fan which is driven by a motor which is fed by cables, power electronics, switches, and then into a generator and into another set of power electronics and into a gas turbine,  you’re adding a lot more complexity into that system.”

Whilst the system won’t now fly as intended, Rolls-Royce plans to complete ground-tests of an integrated system later this year. Meanwhile, a number of key technological milestones have already been reached.

On the Airbus side, the company has carried out extensive wind tunnel testing on scale models of the aircraft as well high power battery system testing at facilities in France. And whilst its E-Fan X activities have come to an end,  Airbus CTO Grazia Vittadini recently confirmed that technologies developed through the project are already feeding into research at the firm’s E-Aircraft System Test House, a facility originally set up as part of E-Fan X.

Meanwhile Rolls Royce has already carried out extensive testing of its 2.5MW generator at a specialist facility in Trondheim, Norway as well as completing testing of a full-scale, flight-representative thermal management rig, and developing a  control system for controlling the engine and electrical equipment together.

Reflecting on some of the key lessons learned throughout this process Armesmith said that one of the biggest challenges  was the development of the electric distribution network that forms the connection between the 3000V DC power generation system, the high voltage battery and the electric motor. “At 2MW of power we’ve got to push up the voltage otherwise the current would be absolutely enormous and the cable to carry that current would be enormous and the forces due to that current would be unmanageable,” she explained.

With the highest voltage system flying today 270V DC, developing a 3000V system presented a huge step up and raised a number of significant challenges.  One of these relates to the effects of a phenomenon called Paschen’s Law, which observes that the voltage required to break through insulation reduces with altitude, therefore making phenomena like arcing and corona more likely.

This has led to a lot of work on insulation systems. “Protection, insulation and separation is our strategy on this,” said Armesmith,  “we’re testing a lot of components at the moment to deal with this.”

Another key challenge has been producing and integrating the wide variety of bespoke components required for such a novel system, many of which - Armesmith explained - simply aren’t available off the shelf. “We’ve had to build everything from scratch. We’re pushing the laws of physics on developing these components and integrating them into the system. We’re trying to replace a gas turbine in a nacelle with an electric motor firing a fan.  How do you package all of that? How do you support that motor with the oil you need to lubricate it? How to do you take the heat out of the motor? Where do you put that heat? How do you integrate the heat exchanger?  How do you insulate your control systems? How do you route your cables? Where does all of your instrumentation go? It has been really challenging to package all of that neatly into the shape of gas turbine.” 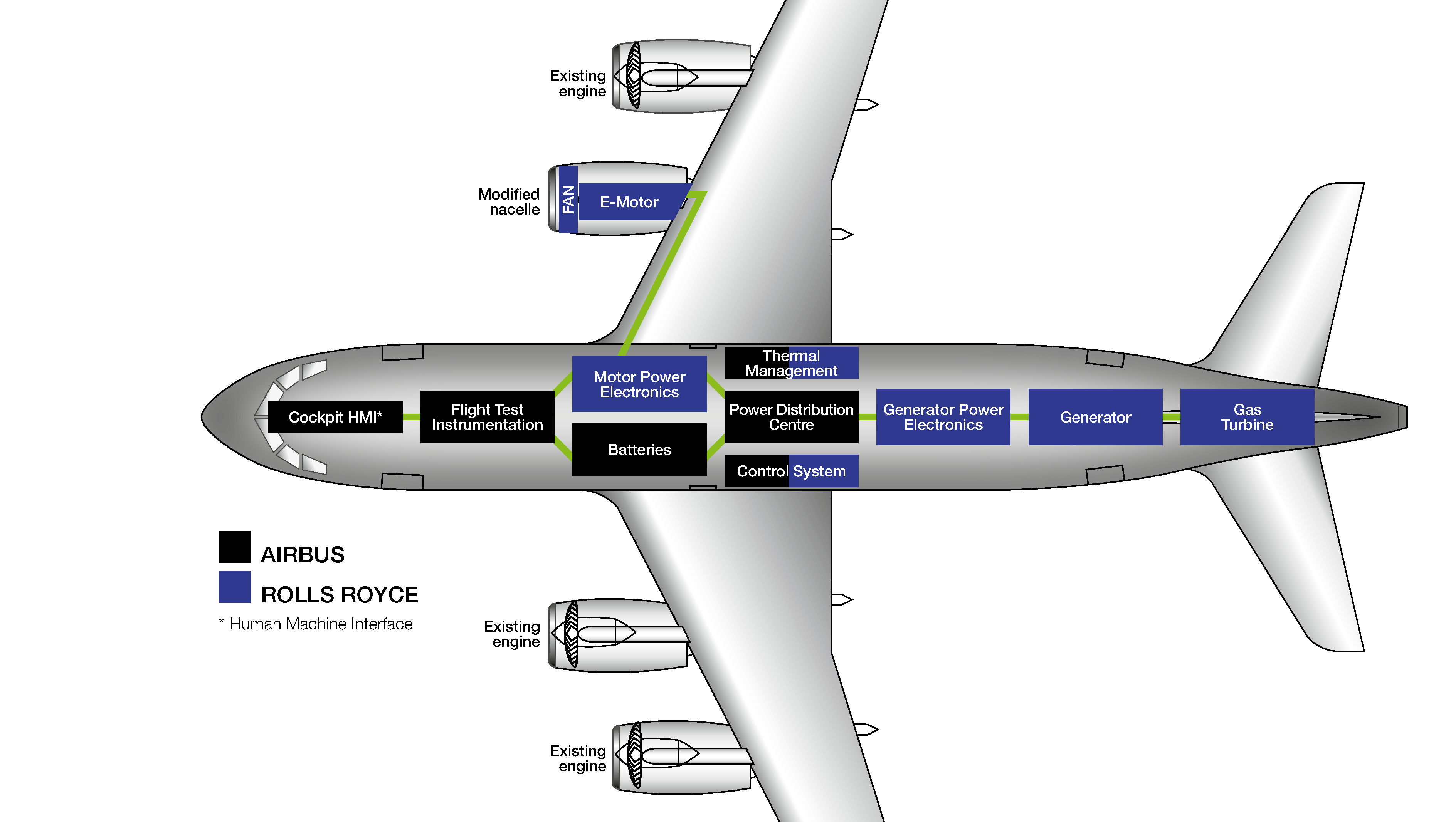 Unsurprisingly scaling all of the components down to aerospace specification in a system like this presents some pretty acute thermal management challenges, and the group has also made some key advances here.  “Any time you touch anything electrical you generate loss which generates heat,” said Armesmith. “If you convert AC to DC that’s lossy, if you transmit the power that’s lossy. We’re having to make sure the cables aren’t too hot, and we’re having to take heat out of the motors, the batteries, and the power electronics.  When you’re at 2MW even with equipment that’s 98 per cent efficient, that’s a lot of heat to take out.”

More generally, the project has also helped Rolls-Royce engineers develop their understanding of the exceptionally complicated relationship between electricity and thrust on an aircraft. “If you look at electric cars the torque is massive,” she said. “And you still get that from a motor on an aircraft, but you’ve got a big inertia on the fan. It then reacts against that in an electrically driven fan, so if you’re thinking you’re going to get quick acceleration then maybe you won’t because of the aerodynamics of the fan. Fan engineers are really interested in all of this because it’s making them go back to first principles.”

Clearly, there’s a big difference between testing all of this in a laboratory on the ground and taking it into an aircraft, and there are undoubtedly lessons that won’t now be learned.

But Armesmith is currently focused on the upcoming ground testing program (set to take place at a new testbed facility in Bristol later this year) which will see the team test  a system that  integrates a 2.5MW generator powered by an AE2100 gas turbine engine, a 3,000V distribution system, plus new power control and thermal management systems.

And the legacy of this work will - she said - be hugely important. “We will have a complete integrated power and thermal management system that is fully integrated and ground tested. That means we will be in a great position whenever anyone is ready to create a hybrid-electric demonstrator vehicle – we will be ready to go. By fully testing the power generation system on the ground we will have enough knowledge to be very well advanced to integrate that further into a future aircraft.”

It’s hard to know exactly what further lessons would have been learned, or indeed whether the project would have reached its original planned conclusion, if Covid-19 hadn’t struck.

And whilst the initiative’s cancellation will certainly be seen by some as a major setback on the path to low carbon flight, Armesmith believes that, in the longer term, the case for green aviation will be stronger than ever. “I believe in our post-COVID 19 world that people will still want to fly and see other people and make new discoveries, and they will possibly be even more aware of our environment. And when the market is ready, the drive to sustainable aviation will resume. Hybrid-electric will be part of that movement and we will be ideally positioned to be a pioneer.”