From the finer points of cricket’s LBW law to the intricacies of the Rugby scrum, professional sport is awash with obscure rules that probably wouldn’t make it past the ideas stage if you were to reinvent the game today.

But perhaps one of the strangest laws of them all is reserved for sailing’s most prestigious trophy, the America’s Cup, where the winner of one competition gets to set the rules for next.

It’s an inherently unfair set up, which hands the incumbent a huge advantage and makes it difficult for a challenger to wrestle the trophy from their grasp. But it also helps to drive engineering innovation in an event that has become one of sporting’s greatest spectacles.

And as the competing teams gear up for the 36th iteration of the event (which takes place in New Zealand next March) The Engineer caught up with Ineos Team UK, the Ben Ainslie led racing team that hopes to become the first British winner of the 170 year old trophy.

As previously reported, this won’t be Ainslie’s first tilt at the sport’s biggest prize. In 2013, sailing’s most decorated Olympian was parachuted into Oracle Team USA’s flagging campaign and has been widely credited with masterminding one of the event’s great turnarounds. More recently, in 2017, he embarked on his quest to win the cup with a British team, and as leader of the Land Rover BAR (Ben Ainslie Racing) enlisted the help of Formula 1 veteran and former Mclaren Group CEO Martin Whitmarsh in an impressive in effort to gain a technological edge over his opponents.

Now, as skipper and leader of Ineos Team UK, and through a performance partnership with top  Formula 1 team Mercedes-AMG Petronas Motorsport, Ainslie and his team are taking this engagement with top-flight motorsport to even greater levels.

At the time of writing, the entire team - along with its two giant yachts, the Britannia 1 development boat and its successor - Britannia - had relocated to its newly constructed base in Auckland’s viaduct harbour. Following a final fit out, the boats will take to the water ahead of next February’s challenger series, which will see the British team compete for a chance to take on the current trophy holder; Emirates Team New Zealand.

Based on the AC75 class rule set by the New Zealand team, the 22.8 metre long monohulls will  fly across the water on giant hydrofoils at speeds of upto 85 km/h (46 knots), dwarfing the smaller foiling catamarans that were used in the 2017 cup. 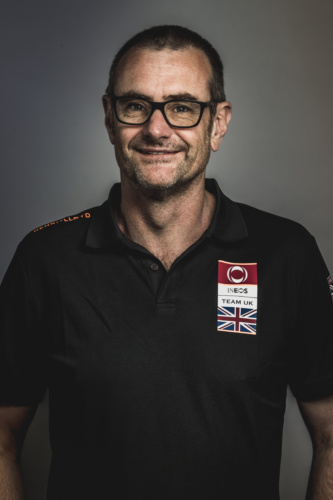 According to chief designer and America’s Cup veteran Nick Holroyd, the boats are unlike anything ever seen on the water before.  And, as he told The Engineer, designing and building a vessel this complex in the short amount of pandemic-interrupted time available since the class rule was published in March 2018, has been a tough challenge. “In my experience of 20+ years in the America’s Cup, these boats are at the absolute top end of the complexity scale,” he said.

One of the overriding challenges was refining the aerodynamic performance of the hull to develop a design that extracts maximum power from the rig. Achieving this, he said, had more in common with aircraft engineering than boat design. “The hull of these things doesn’t spend much time in the water, so you look at it as a fuselage that sits under the rig.”

Another key challenge was the design of the foils themselves. Whilst the 2017 boats used solid carbon fibre foils, the new rules mandate the use of a flap or elevator element along the foil that’s used to control the boat, and the challenges of packaging all of this into a structure resilient enough to withstand the huge forces encountered during racing has, said Holroyd,  been a major area of focus.  “You’re designing aircraft kind of flap mechanisms, but you’re operating in a fluid that’s 800 times more-dense so the forces you can generate on these foils are absolutely astronomic,” he explained. “You have a strength and power packaging problem where you’re trying to engineer the mechanism to move these flaps around quickly and accurately and have sufficient strength to take the potential loads they can generate.”

Perhaps the biggest challenge of all, though, was the time available to do all of this. With the class rule issued in March 2018, and yacht construction beginning in September, the group had just four months to complete their core design, something that was only made possible by a major focus on the adoption of the kind of simulation tools used in F1.

This simulated environment is used in a number of different ways, from tweaking design parameters, to exploring ways in which the crew can enhance the performance in different conditions.

It has even involved embedding sailors in the virtual world using human in the loop technology. “We put three of our sailors on a motion platform in VR goggles using the exact wheel and exact controls they would have on the boat and we let them sail,” explained Holroyd. “We put them in the Auckland environment, we model the typical wind fields we might expect to see, the wave states, the tidal states.”

This level of immersion has provided data that has been key to refining the design of the second boat, he said.

Whilst simulation has become an increasingly important element in America’s Cup yacht design, the approach used by the Ineos team has drawn heavily on the expertise of its technical partner Mercedes-AMG Petronas, which has supercharged the group’s efforts by embedding a team of around 20 F1 engineers and providing access to the production, assembly and testing expertise at its site in Brackley, Northamptonshire. 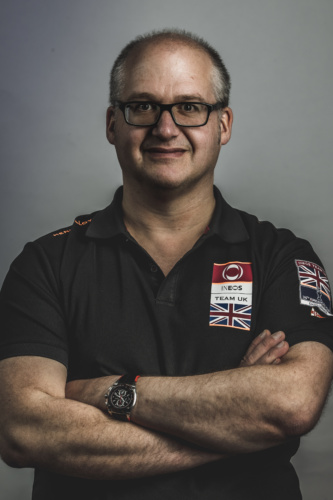 Graham Miller is the Mercedes Grand-Prix Project Leader responsible for leading this relationship.

“We’re here to augment Nicks design team and give them the bandwidth they’d otherwise be lacking,” he told The Engineer. “The mantra in the race team is about having our issues in the test lab and not on the racetrack and were’ trying to bring that same ethos to the boat team.”

One of the keys here, is giving the team access to the vertically integrated environment of a motorsport team. “In F1 you need to be be able to control as much of the key processes as you can, and what that gives us is a fantastic design, development and manufacturing base that you would rarely find in other industries and that’s been really useful for this team. Just to be able to help them develop quickly and engineer out of unexpected issues.”

For Holroyd, having access to all of this expertise and technology has been a real eye-opener. “You’ll be debugging a problem and will say “it would be great if we could understand what’s happening to the geometry here and the next thing you know they turn up with a high speed stereo camera that puts targets all over the wing and they can capture the geometry at thousand frames per second while you’re running the actuation! The layers and layers of capability that have built up in an organisation like that over a very long period of time is staggering.”

Of course, despite the differences there are some pretty fundamental synergies. Both teams are from a competitive environment and well-schooled in the design technologies and methodologies that are used to deliver the kind of fractional gains that can be difference between victory and defeat. And this makes for a natural collaborative relationship.  “The similarities between our engineering process, the way we go about designing something and committing it to simulation, the fact that both of us are designing things for a racing environment. All of those things have meant that the fit between the organisations is incredibly easy,” said Holroyd.

Many of the engineering challenges are also similar, added Miller. “Sailing has traditionally been very much a hydrodynamic world but with these boats spending most of their time out of the water, the whole platform becomes quite an aerodynamic issue.”

Touching on some of the specific ways in which Mercedes has helped the sailing team, Miller singled out the test and the assembly of the foils as a major area of focus. “We recognised early on, the big foils that the boat rides on – we should take that away and do test and assembly up at Brackley much like we would do for a race car, so that we could simulate loads with test rigs and deliver it back to the team as a plug and play concept.”

The motorsport team also helped speed up the production processes involved by applying Mercedes in house production management system to the development of the boat.  “[The sailing team] is very dependent on the subcontract world and that doesn’t necessarily give you speed,” said Miller.  “The ability to tap into the resources of the race world has been very useful.”

Clearly, all of this has been of huge benefit to the sailing team, but it’s not all one way traffic.  “It’s been a win win,” said Miller. “F1 can be quite repetitive. For a lot of engineers you’re tweaking a component. To come into something like this where it’s a very different animal is quite refreshing for the engineers to get exposed to some different techniques.”

There have also been some valuable technical lessons learned from the sailing team, perhaps most notably – in these pandemic-affected times – the way that the sailing team has managed remote collaboration. “One of the things that struck me in the early days was how they run a disparate design team,” said Miller.  “They’ve got designers contributing to the platform from all over the world. They were very much ahead of Mercedes in terms of doing all of that and it was an eye opener for me.”

The question now is whether all of this hard work will translate into victory in New Zealand next year, but with lots of technical work still to be done it’s a bit early to be making predictions said Holroyd: “My job is in some ways “nothings ever good enough, right now there are a huge number of balls in the air.  Our job is to catch those, harness the gains,  and apply them in the right way. Right now, it’s about keeping your eye on the ball.”

Plane sailing: engineering an assault on the America's Cup