Take a wander around the Making of the Modern World gallery at London’s Science Museum and you’ll see, among exhibits such as Stephenson’s Rocket and the crew capsule of Apollo 10, a curious-looking car. Its body is blocky but smoothly curved, with a blunt front end that tapers towards the back - a streamlined style familiar from pulp science-fiction novel covers. This is Rover’s JET1, generally accepted to be the first car powered by a gas turbine engine rather than an internal combustion engine, and it’s approaching its 60th birthday this year.

Gas turbine cars have made a comeback this year, however, with Jaguar’s latest concept vehicle, the C-X75, making a splash at the Paris Motor Show and winning the Best In Show prize. Just as striking in its styling as the JET1 was in its day, the car is also billed as ’jet-powered’, although in truth neither of the vehicles could be described as a jet. The stories behind both vehicles show how automotive technology has developed and where it might be going. 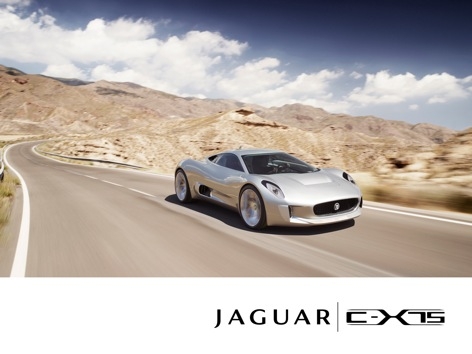 JET1 was a purely mechanical car. The gas turbine just represented another way of generating rotational motion, burning a fuel-air mixture of petrol, diesel or paraffin to spin a central shaft at up to 50,000rpm. The idea was perfectly sound, but Rover, which had become involved in developing gas turbines during the Second World War, couldn’t make an engine that was both small enough to fit into a conventionally sized car body and could be run economically, so the project was scrapped. Like many designs from the forward-looking 1950s, it looks like something from a parallel world: a slice cut into a future that turned out not to be ours.

Jaguar’s offering, however, is not mechanical. The engines do not power the car directly and they don’t generate thrust (which is why the car should not be described as a ’jet’). Instead, they fulfil the other function for which gas turbines are generally used - they generate electricity.

This charges the car’s batteries, because the C-X75 is that quintessential early 21st century vehicle, the hybrid car.

The C-X75 is a range-extending electric vehicle (REEV). Where hybrids such as the Toyota Prius can run on rotational energy generated via electric motors or a small internal combustion engine, REEVs always run under electric power, with the combustion engine running a generator to keep the battery topped up.

The advantage, as the name implies, is the range. While fully electric vehicles need to charge their batteries and are therefore limited to the charge a battery can hold, a REEV generates its own power. It only has to carry enough batteries to carry it for a little more than the average distance of a journey, rather than having a much larger contingency capacity for rare longer trips; this reduces the weight of the car dramatically and also, because of the high cost of batteries, keeps the price down.

Moreover, because a REEV’s engine is only charging a battery, it can always run at its most efficient speed; it doesn’t have to generate a variable load, high under acceleration, low while cruising, like an engine that is directly driving a car. If you have to burn fuel to drive a vehicle, REEV proponents argue, then this is the most efficient way to do it.

The company claims its four 145kW, 400Nm-torque hub-mounted electric motors will generate 780hp, propelling the car at speeds up to 204mph and managing 0-62mph in 3.4 seconds (and 60 to 70mph in an eyeball-flattening 1.1 second). A single full charge in its lithium-ion batteries will keep it going for 100 miles, but its two gas turbine engines extend this range to some 560 miles. Interest has been such that the company is reportedly embarking on a feasibility study to produce 1,000-2,000 cars per year, although it would be five to seven years before they could be commercially available.

The innovation that has made this concept car possible - and which Jaguar Land Rover believes could power a new generation of REEVs - is the micro-gas turbine, which has been made by an Isle of Man-based company, Bladon Jets. Working as part of a Technology Strategy Board-funded consortium with Jaguar Land Rover (now part of Tata Motors) and Harrogate-based electrical equipment manufacturer SR Drives, the company has developed an axial-flow turbine weighing a little under 35kg, with a compressor only 75mm across.

People said micro-jets couldn’t be done. Paul and Chris Bladon came at the problem as machinists; their focus was different

This small size was not previously not possible, because the bladed disc (’blisk’) of the turbine had to be assembled in several parts, with the individually produced blades bonded to the central hub. Bladon, however, has developed a process to machine blisks in a single piece from virtually any metal, including aerospace alloys of aluminium and nickel and even aerospace-grade titanium. The blades can have any profile, with the sectional shape, edge radius and degree of taper from the root of the blade to the tip all customisable.

Bladon was founded by twin brothers Paul and Chris Bladon, whose background was in motorbike racing, said Courtenay Heading, business development director at Bladon Jets. ’Part of the background to this was that their father was a rocket scientist, and Paul and Chris believed from a very young age that they could make a micro-jet engine,’ Heading said. ’People said it couldn’t be done, because you couldn’t make a blisk small enough; for the rotation speed you need, it has to be very balanced and that wasn’t possible with multi-part blisks. They found a method to cut the metal very accurately in a repeating process based on spark erosion and we have patents in place to protect that intellectual property.’

Heading believes that the Bladons’ background - Paul, who died in 2008, was a machinist, while Chris is a draughtsmen - was the key to their discovery. ’Everyone else came at it as engineers, they came at it as machinists; their focus was very different to other approaches. As twins, they were used to working very closely together.’

For the Jaguar project, Bladon teamed the turbine, spinning at a constant 80,000rpm, with a switched-reluctance generator capable of putting out 70kW of power. The integration of the two turbine-generator combinations with the vehicle drew on Jaguar Land Rover’s experience with the JET1. According to Heading, the engines are not noisy; the turbine’s exhaust, which causes the noise from a jet, is baffled and cooled by additional airflow.

’This car signals Jaguar’s intent to be an innovator again,’ Heading said. Parent company Tata has recently taken a minority stake in Bladon which, according to Heading, is owing to the company’s interest in micropower generation. ’Turbines are multi-fuel tolerant, so if you’re in a remote location in India, you might only have access to variable-quality biofuel; you might even want to use fuel derived from animal fat.

Turbines will work with any of those and they have only one moving part; they won’t gum up like a less-tolerant piston engine.’

This is also an advantage for REEVs. ’You can burn any fuel. You don’t have to worry about the vehicle’s range; as long as you can get to a petrol station, you can fill up in three minutes and you’ll be generating power,’ Heading said. ’Turbines are lightweight, easy to maintain, they allow you to reduce the weight of the batteries and you charge on the go. Everything else in electricity generation has gone turbine; why not cars?’

turbine test - on the road

The Engineer reported on the road testing of JET1 in January 1953’During last year a number of officially observed test runs with ’Jet 1’, the Rover gas turbine car, culminated in the establishment of a mean speed over a measured mile of 151.196mph (243.327km/hr) on the Jabekke highway in Belgium. Subsequently, after stripping for inspection by the RAC and reassembling with all the original components, the car has been passed into almost everyday use to gain further knowledge of control and maintenance requirements of gas turbine vehicles.

’Development work on small gas turbine units for commercial and military applications has actively proceeded and component testing designed ultimately to increase thermal efficiency, reduce weight and increase operational time between inspections, has been carried out. Considerable attention has been given also to advanced metallurgical, combustion and manufacturing techniques.’