Bloodhound has rounded out its Kalahari test programme in style, hitting 628 mph (1,010 km/h) in its final 2019 run across the Hakskeen Pan track in South Africa. 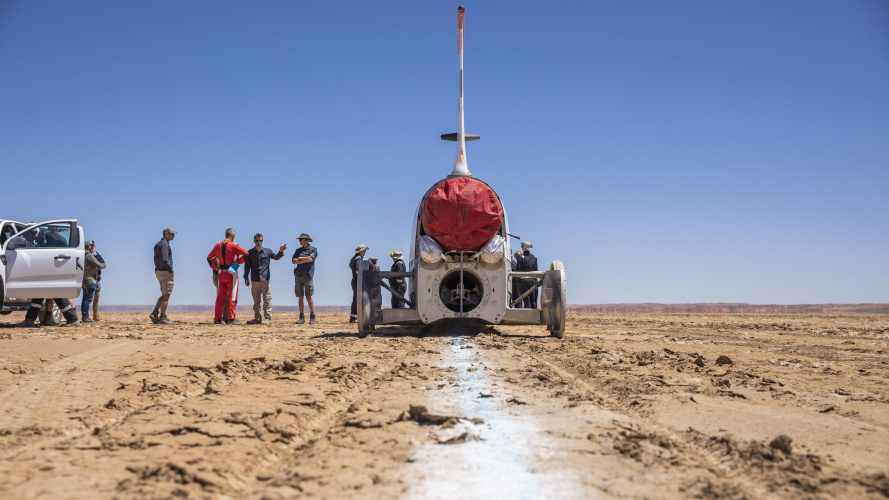 Run Profile 8 saw the vehicle hit a number of pre-defined parameters, with Bloodhound reaching maximum velocity in 50 seconds. Driver Andy Green lifted off the throttle at 615 mph (989 km/h), stabilised the car and then deployed a drag parachute to slow the car safely to a halt at the 11 km mark. The four weeks of testing in the Kalahari Desert have seen the Bloodhound LSR team hit a succession of impressive targets, putting them in good stead for their return to Hakskeen Pan within the next 12-18 months to take on the land speed record of 763 mph.

“This morning we had the perfect conditions for a high speed run; cool temperatures and virtually no wind,” said Green.  “After a slick start procedure from the team, the car handled superbly once again.

“The stability and confidence the car gives me as a driver is testament to the years of world class engineering that has been invested in her by team members past and present. With all the data generated by reaching 628 mph [1,010 km/h], we’re in a great position to focus on setting a new world land speed record in the next year or so.”

That data included supersonic airflow detected underneath the car, which stripped paint from an area three metres behind the front wheels. The vehicle’s 192 pressure sensors provide data which is cross referenced against CFD (computational fluid dynamics) models to see how Bloodhound’s real-world performance stacks up against simulations, and to see how much drag is created on each run. This will determine the size of the rocket that will supplement the car’s EJ200 jet engine when Bloodhound returns to the Kalahari in pursuit of the land speed record and potentially the 1,000 mph barrier.

According to the Bloodhound team, Norwegian rocket expert Nammo is developing a monopropellant rocket that will produce an additional 60kN of thrust to complement the 9kN already produced by the jet engine. Despite that 9kN being equivalent to 54,000bhp, this is not enough to propel the car past Thrust SSC’s current record of 763 mph or beyond the sound barrier of approximately 767 mph.

“Our speed objective for these tests was to reach 1,000 km/h,” said Bloodhound LSR owner, Ian Warhurst. “Hitting 1,010 km/h is a real milestone and shows just what the team and the car can achieve. With the high speed testing phase concluded, we will now move our focus to identifying new sponsors and the investment needed to bringing Bloodhound back out to Hakskeen Pan in the next 12 to 18 months’ time.

“Not only am I immensely proud of the team, I’m also delighted that we’ve been able to demonstrate that the car is eminently capable of setting a new world land speed record.”