Researchers at MIT have created a device to lighten the burden for soldiers and others who carry heavy packs and equipment.

Researchers in the MIT Media Lab's Biomechatronics Group have created a device to lighten the burden for soldiers and others who carry heavy packs and equipment.

Their invention, known as an exoskeleton, can support much of the weight of a heavy backpack and transfer that weight directly to the ground, effectively taking a load off the back of the person wearing the device.

The researchers' prototype can successfully take on 80 percent of a 36.4kg load carried on a person's back, but there's one catch: the current model impedes the natural walking gait of the person wearing it.

'You can definitely tell it's affecting your gait,' said Conor Walsh, a graduate student who worked on the project, but 'you do feel it taking the load off and you definitely feel less stress on your upper body.'

The research team was led by Hugh Herr, principal investigator of the Biomechatronics Group and associate professor in the MIT Media Lab. Earlier this summer, Herr and his colleagues unveiled the world's first robotic ankle for lower-limb amputees.

Eventually, Herr hopes to create assistive leg devices that can be useful for anyone. Herr said he envisions leg exoskeletons that could help people run without breathing hard, as well as help to carry heavy loads.

'Our dream is that 20 years from now, people won't go to bike racks - they'll go to leg racks,' he said.

Exoskeleton devices could boost the weight that a person can carry, lessen the likelihood of leg or back injury and reduce the perceived level of difficulty of carrying a heavy load.

The person wearing the exoskeleton places his or her feet in boots attached to a series of tubes that run up the leg to the backpack, transferring the weight of the backpack to the ground. Springs at the ankle and hip and a damping device at the knee allow the device to approximate the walking motion of a human leg, using just 1W of external power.

Other research teams have produced exoskeleton devices that can successfully carry a load but require a large power source (about 3,000W, supplied by a gasoline engine).

When the MIT researchers tested their device, they found that although the load borne by the wearer's back was lightened, the person carrying the load had to consume 10 percent more oxygen than normal, because of the extra effort to compensate for the gait interference.

The team hopes to revise the design so the exoskeleton more closely mimics the movement of a human leg, allowing for more normal walking motion. The most important result of this study, says Walsh, is that the team's spring-based, low-energy design shows promise. 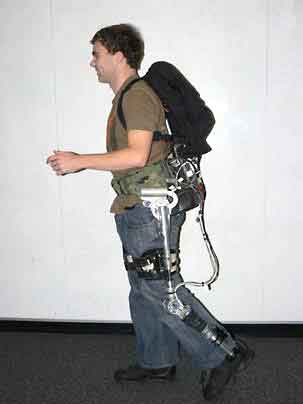 Graduate student Conor Walsh demonstrates a prototype of the exoskeleton he and other MIT researchers have devised. The invention can successfully take on 80 percent of a 36.4kg load carried on a person's back.

On the right foot