Researchers at HP Labs claim to have proved the existence of a so-called memristor or memory resistor.

All electronic engineers have heard of the resistor, the capacitor and the inductor. Now, researchers at HP Labs claim to have proved the existence of a fourth basic electronic device.

The so-called memristor - short for memory resistor - could make it feasible for engineers to build systems with memories that retain information even after the power is off.

A mathematical model and a physical example that prove the memristor's existence appear in a paper published in the April 30 issue of the journal Nature.

'To find something new and yet so fundamental in the very mature field of electrical engineering is a big surprise,' said R. Stanley Williams, an HP Senior Fellow and director of the Information and Quantum Systems Lab (IQSL).

The memristor first appeared in a 1971 paper published by Prof Leon Chua, a distinguished faculty member in the Electrical Engineering and Computer Sciences Department of the University of California Berkeley.

Chua described and named the memristor, arguing that it should be included along with the resistor, capacitor and inductor as the fourth fundamental circuit element. The memristor has properties that cannot be duplicated by any combination of the other three elements.

Although researchers had observed instances of memristance for more than 50 years, the proof of its existence remained elusive - in part because memristance is much more noticeable in nanoscale devices.

Williams and Dmitri B. Strukov, Gregory S. Snider and Duncan R. Stewart were able to formulate a physics-based model of a memristor and build nanoscale devices in their lab that demonstrate all of the necessary operating characteristics to prove that the memristor was real. 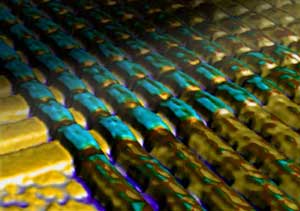 The researchers say that a detailed description of the nanoscale physics leading to memristor action will be published in the near future and will include a great deal more experimental evidence.

'This opens up a whole new door in thinking about how chips could be designed and operated,' Williams said.