Researchers in California claim to have devised a method to produce aviation-quality biofuel at low cost from sugar cane waste. Will this have any significant effect on carbon emissons from aerospace? 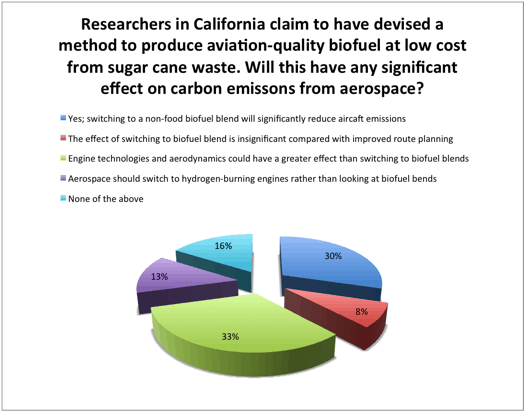 Some scepticism about the benefits of aviatiom biofuels was on display in the results of last week’s poll. Of the 280 respondents, the largest group, a third, thought that improvements in engine technologies and aerodynamics would have a larger effect on emissions than switchimg to a biofuel blend, although only slightly fewer, 30 per cent, thought that biofuel blends could significantly reduce emissions. Another group, 13 per cent, thought switching to hydrogen enginmes would be more fruitful, while 8 per cent favoured improving route planning. Several commenters expressed concern that the ‘waste material’ from sugar cane production used to makre buiofuel might not be waste at all, but already used as fuel to power the sugar refining process or composted and ploughed back into the ground as as fertiliser. Quite a large proportion, 16 per cent, declined to pick an option.

Please continue to lety us know your opinion on this topic.