Last week we asked our readers if energy companies should pay a price for their contribution to the climate crisis. 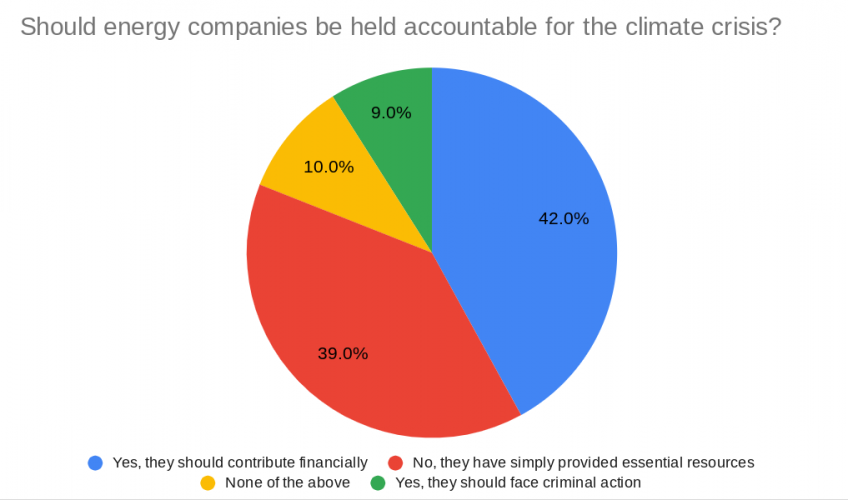 Later this month Exxon Mobil is going on trial in New York accused of lying to its investors and misrepresenting the economic risk of climate change to its business. It’s alleged that the US energy giant is one of several petroleum companies that conducted research into climate change and its causes as far back as the 1980s, with some accurately predicting the effect on sea level rises and the increase in extreme weather events.

Misleading investors is one thing, but what about misleading the public and intentionally muddying the waters on climate science for decades? Should energy companies face financial or even criminal penalties for their actions? Our readers were quite evenly split on the issue, with 42 per cent saying that energy companies should contribute financially to mitigation efforts. Right behind that, 39 per cent felt that no responsibility rests with the companies and they have simply been providing essential natural resources to power the global economy. Just nine per cent thought the energy industry should face criminal action, while 10 per cent chose the 'none of the above' option.

"I see why people might wish to make energy companies pay – but sometimes it is hard to see where the fault lies," wrote Peter Spence. "Much should depend, I believe, in OFGEM and National Grid as they set the purchasing guidelines and regulations."

Another Steve commented: "The fact is we are all responsible for the mess we are in, and it’s naive to think if Joe Public had had all the facts that he’d necessarily have changed his ways. Most people have been aware for a long time of what was going on but chose to play dumb.

"A line in the sand should be drawn, moving forward, such that an admission is agreed of the effect on the environment and if they continue with such behaviour then they should be prosecuted and financially penalised."

The Engineer acknowledges that this can often be a controversial topic, but we do continue to welcome comments below the line. However, this publication accepts the widely held scientific view that increasing global temperatures are largely the result of anthropogenic causes. Comments that seek to obfuscate the issue without citing peer-reviewed science will not be published. Our comment guidelines can be viewed here and we recommend all readers familiarise themselves with them before engaging in the debate.