With absenteeism among manufacturers showing a slight rise, we asked how employers should help reverse this trend. 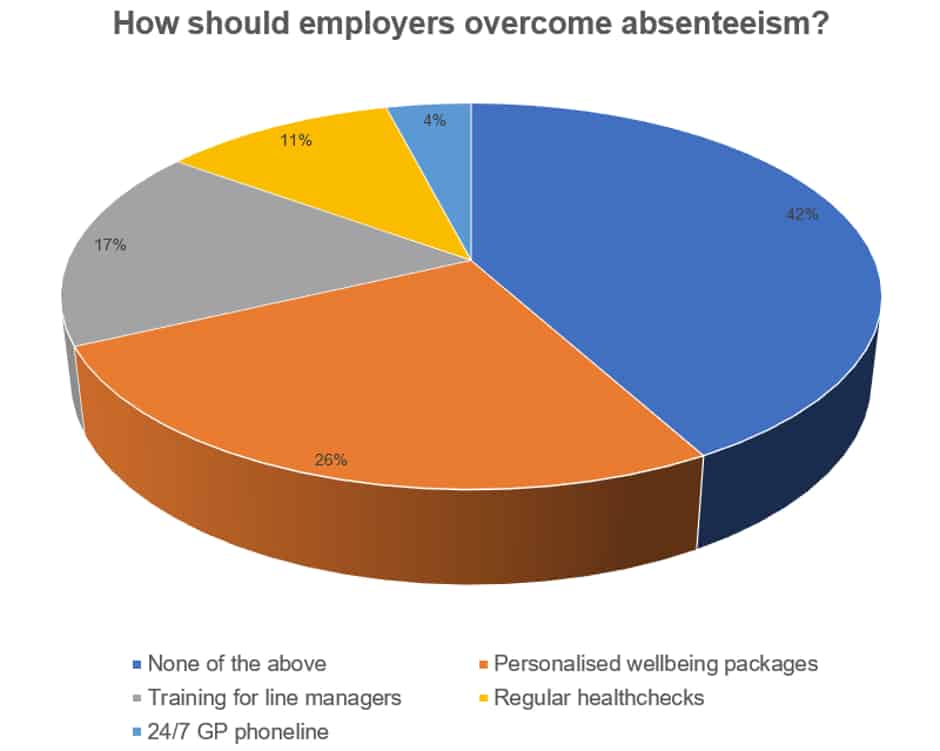 By way of a recap, Make UK recently published its Absence Benchmark, which reports annually on the days missed by employees due to sickness. It found that the overall absence rate increased slightly in 2018 to 2.3 per cent, up from 2.2 per cent in the previous year.

With employers keen to increase productivity, how exactly should they work toward reducing sickness absence and maintaining the wellbeing of employees?

Just over a quarter of respondents (26 per cent) opted for personalised wellbeing packages, followed by 17 per cent who thought line managers should be trained in identifying the signs of impending health issues. Eleven per cent of respondents thought regular health checks could help bring down absenteeism, and four per cent agreed that a 24/7 GP phone line would be of most benefit. Forty-two per cent went for the weekly ‘none of the above’ option, including Peter Spence and Paul Wickens who said that all the options given are applicable to workplace wellbeing.

Certain readers added comments suggesting that absent employees should not be paid, a view challenged by the likes of Stephen Bee who said: “As someone who has just returned to work following an absence caused by work related stress, the attitude of ‘stop paying for absenteeism’ is perhaps the most unhelpful comment here and shows a distinct lack of understanding of mental illness. I would recommend that training is sought by all managers and employees, so that the warning signs can be recognised early and appropriate remedies put in place before any absenteeism occurs.”

Graham Burked added: “Stress is one of the biggest causes of absenteeism often caused by pressure at work and ongoing fear of job security. I don’t agree with the ‘stop paying for absenteeism’ philosophy, it does nothing for motivation and for the low paid it just causes more stress.”

On the flip side of the absentee argument, employees bringing their communicable illnesses to work were challenged also.

“We have all suffered at the hands of the ‘I’m too important’ types who struggle in to the office and infect everyone – why don’t companies take a more proactive role in stopping this attitude?” said Another Steve.

“If people are taking advantage and abusing the sickness rules then that is a symptom of poor management and is very easily fixed – managers just need to do their job,” Another Steve added. “Repeated abuse should be investigated and either help given or disciplinary measures applied ‘if’ appropriate.”

What do you think? Keep the conversation alive using Comments bellow. All comments are moderated. Our  guidelines for comments can be found here.