Last week's poll: should Gatwick or Heathrow be allowed to expand? 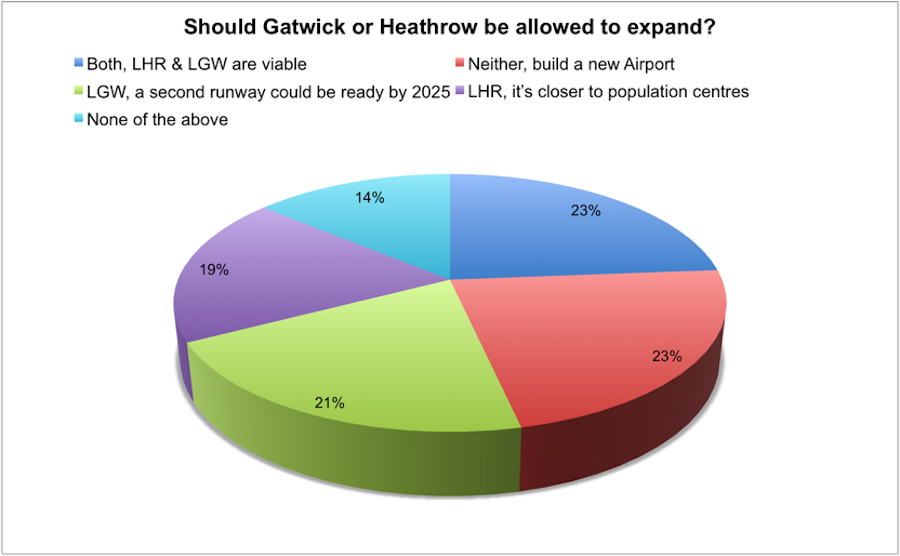 Government ministers today announced their support for a new runway at Heathrow  Airport, a decision that is somewhat at odds with the results of our latest poll.

Last week we asked if Gatwick or Heathrow should be allowed to expand, with just under a fifth (19 per cent) opting for Heathrow. Gatwick fared a little better with 21 per cent of the 723 votes cast.

Just under half of the vote (46 per cent) was split equally between those who favoured expansion at both airports, and those who want to see an entirely new airport built. A total of 14 per cent opted for ‘None of the above’.

In July 2015 the Airports Commission published its final report on airport expansion, with Heathrow identified as being the preferred option over Gatwick.

Gunning for expansion at Gatwick and Heathrow might be seen as wholly positive in this EU-Referendum era but, as commission chairman Howard Davies pointed out in The Telegraph on October 23, 2016, a green light for two proposals would result in neither being built ‘as it would be impossible to argue that both runways could be fully used in the next 20 years while meeting our legislated climate change commitments’.

A proportion of the 64 comments generated by last week’s poll queried whether London and the South East are themselves suitable locations for airport expansion, with Engineer reader Kathy Wilkinson commenting: ‘Situated in the congested South East, both Heathrow and Gatwick are not easy to access for the majority of the population who live in the rest of the country.

‘What about expanding our regional airports? Birmingham, for example, is better located in the middle of the country, right next to excellent transport links and far more accessible for both business and travellers.’

Davies noted in the Telegraph that the Airports Commission ran an open competition for the first new runway and that those that didn’t make it onto the shortlist – including Birmingham – accepted the decision on condition that they could bid again for further runway expansion.

‘Giving Gatwick the green light now would again risk a challenge, and might well turn out to be the wrong long-term decision. With HS2 in place, Birmingham might indeed be a more interesting option.’

What are your thoughts? Let us know via Comments below.