In last week’s poll we turned our attention to US President Donald Trump’s instruction to NASA to focus on a new crewed lunar landing programme and to develop a future mission to Mars. 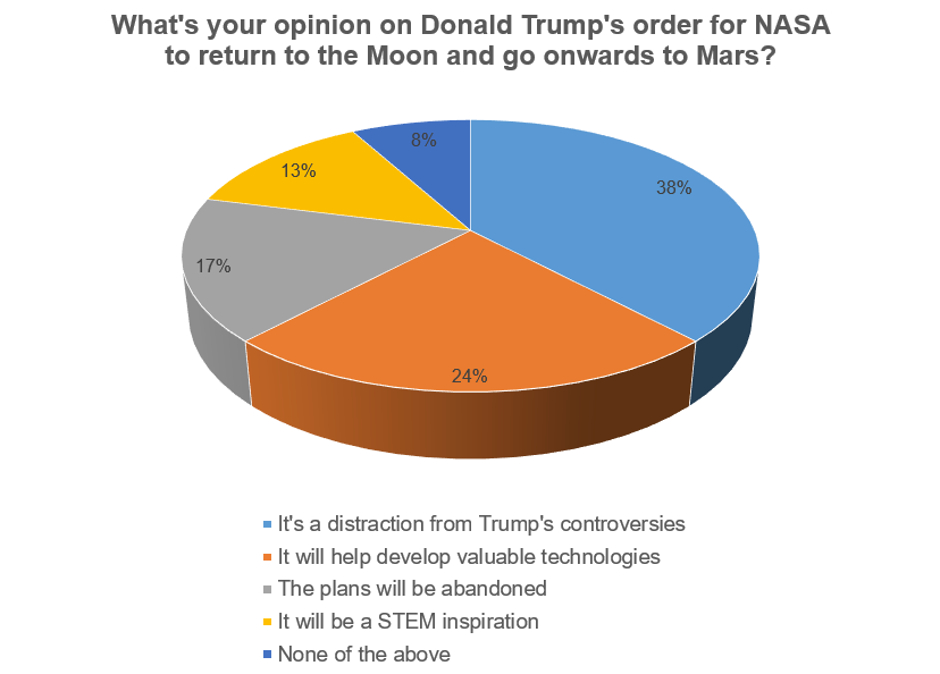 As we reported - unlike President Kennedy’s famous speech at the height of the Space Race in 1961 - Trump’s order is relatively vague and is in line with NASA’s existing  plans to develop the Orion capsule, the giant Space Launch System rocket, and an orbital Deep Space Gateway.

Neither is it the first presidential order directing NASA to the moon; both Presidents Bush issued Space Vision directives calling for missions to the Moon and Mars, but such programmes are such long term goals that the clock ran down with no such missions going ahead.

Reaction from the 644 respondents taking part was fairly mixed, although the majority (55 per cent) were sceptical about the plans, with 38 percent of the overall sample feeling that Trump’s plans are an attempt at distraction, and 17 per cent saying that the plans will never come to fruition.

Reader comments were generally in tune with the breakdown of the vote, with many expressing extreme scepticism over the president’s plans.  “He’s just providing a temporary distraction from his disastrous premiership,” said Michael Reid.

Others, like Chris, whilst still agreeing it was a distraction, were supportive of the proposed goal. “This may turn out to be the only good thing DT will do,” he said.

Some respondents, such as Rod Evans, avoided the politics altogether, and said a return to the moon was long overdue. “This is a good instruction and returns NASA to its core competences,” he said. “We should never have stopped the moon project. The benefits to the scientific community from having a permanent manned base on the moon are huge.”

CLICK HERE FOR THE ENGINEER'S COVERAGE OF THE FIRST SPACE RACE