On the back of the announcement of a new 50 MW/250 MWh cryogenic energy storage plant for northern England, we asked readers of The Engineer which type of grid-scale storage they favoured for the UK. 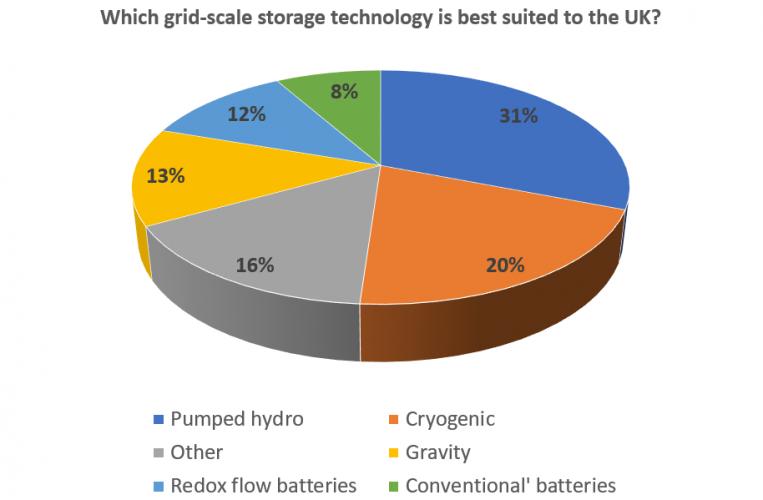 There are several possible technologies available or in development:

How pumped hydro storage can help save the planet

Despite some of the challenges the technology faces, pumped hydro was the most popular option amongst our readers, garnering 31 per cent of the vote. Cryogenic grid-scale storage came in second with 20 per cent. Just 8 per cent felt lithium-ion batteries were the best fit for the UK, with readers slightly more convinced by redox flow battery technology (12 per cent). Gravity-based systems were backed by 13 per cent of respondents, while 16 per cent chose the 'other' option.

"Cryogenic storage is very promising and well worth developing," wrote Jack Broughton. "However, pumped storage is the only proven large scale system of those listed, for GWh level storage.

"The other storage technology that is proven at this scale is Compressed Air Energy Storage, CAES. There are two of these that have been in very long term use and the design is proven."

"The big issue in storage is the length of time storage technology can support the grid," said Phillip Owen. "Is it a question of a few minutes frequency support? Is it a question of a few hours for reducing peak requirements? Is it a question of 10 days demand for the entire United Kingdom on a cold January or February anticyclone when the wind doesn’t blow and the days are short and foggy? To provide cover for 10 days with renewable resources would require tidal energy and perhaps a six-hour storage period."

Readers are invited to continue the debate in the comments section of our news piece on Highview Power's new cryogenic storage project or indeed kick off a brand new conversation below the line here in response to the poll results. As ever, we ask people to familiarise themselves with our guidelines for the content of comments before submitting and remind them that all comments are moderated for length, style and clarity.