The UK's stated intention to leave the European Atomic Energy Community (EURATOM)  - revealed last month in explanatory notes to the government’s bill authorising Brexit - understandably raised a few eyebrows.  And with 543 readers responding to our poll on the topic it's clearly an emotive issue for many in the engineering community. 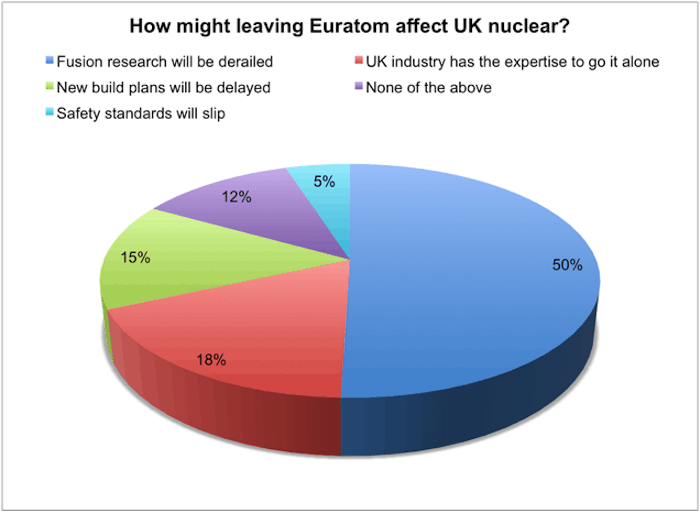 The treaty - which was signed in 1957 - establishes a common market in nuclear goods, services, capital and people within the EU and includes co-operation agreements with countries including Canada, Japan and the USA. It facilitates UK participation in long-term research and development (R&D) projects, and also provides a framework for international nuclear safeguard compliance.

Numerous experts have warned that leaving the treaty could have a range of negative impacts for the UK: from putting its nuclear new build plans into limbo once again, to undermining the UK's world-leading position in the development of fusion energy.

We asked readers which of these impacts they were most worried about, or whether they felt the UK had the expertise to go it alone.

70 per cent of our respondents felt that the decision would be in some way negative for the industry, with  50 per cent of those who voted singling out its impact on fusion research as the biggest area of concern.

This was reflected in a number of the comments we received. Peter Thomas, for instance, described the decision as "Another example of short termism, the curse of long term projects."

The next largest response group, 18 per cent of those who voted, selected the one optimistic option on offer, and felt that the UK has the strength to go it alone. However, those commenting on the poll were not so convinced. Nick Cole suggested that whilst we might have the technical know-how we don't have the "financial imagination and political support", whilst Ian Bennett describes this notion as a "Brexicidal fantasy."

The next largest group, 15 per cent of respondents, were concerned that the decision could impact nuclear new build plans, whilst 12 per cent selected "none of the above". The smallest proportion of those voting (5 per cent) felt that safety concerns were the biggest issue.