Using machines for maths has become a routine operation. It is a fair bet that all readers of The Engineer carry around more computing power in their pockets than was used to design the first nuclear reactors, put men on the Moon, and work out the aerodynamics of Concorde — put together. But our mobile phones and MP3 players work in the simple, precise language of digital, performing calculations by determining whether or not current is flowing. Electronics can be more subtle than that.

Chris Toumazou has spent his career exploiting that subtlety and the results have been remarkable. Imperial College made him a professor at the age of 33; he has founded four companies, spun-off from his research; he is an advisor to at least two governments; and he is the chief scientist and director of the Institute of Biomedical Engineering at Imperial College, where he has conducted all his research. From its origins in mobile-phone technology, his research is now leading into new methods of monitoring, treating and diagnosing medical conditions, as well as supporting and augmenting failing organs. He has done this by finding a way of making electronics work with biological processes, while still remaining small and consuming tiny amounts of electricity. 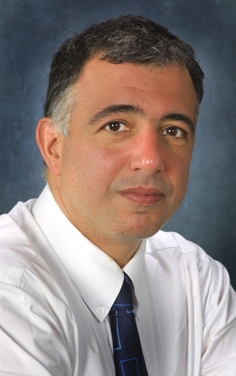 ‘My background is in radio-frequency semiconductor technology, in looking at ways to reduce the power consumption,’ Toumazou said. This was a hot topic in mobile communications in the late 1990s and early 2000s, where there was a variety of different systems for mobile-phone transmissions, some analogue, some digital. ‘The key to reducing the power consumption was to use the transistor — which is the basis of semiconductor electronics — as an analogue device, rather than a digital one.’

This is a tricky concept that depends on the physical and chemical behaviour of the semiconductors in the transistors. ‘We can use the mathematics implicit in the hardware physics, resulting from the way electrons flow through the material. You can do multiplication using logs and anti-logs, for example; you can do trigonometry and lots of other non-linear maths. In digital applications, you crush all of that physics into a simple one-zero — is the transistor allowing current to flow, or isn’t it? But to do the sort of maths with digital electronics that we do using transistors as analogue devices, you’d need thousands of transistors switched on and off with C-code. We only need a handful, which is why the power consumption is so low.’

The trade-off for this is accuracy, Toumazou explained: analogue signals drift, whereas digital, by its very nature, is accurate. ‘We were able to use digital electronics as a workhorse to tune the analogue signals, to make sure they don’t drift. But the analogue is still the brain. The digital is only there for housekeeping, which keeps it simpler.’

The combination of low power and the analogue/digital blend allowed Toumazou to develop a system to reconfigure mobile phones to whatever type of network was used in the local area, and a system using these chips briefly went into production in Thailand before standardisation switched mobiles onto digital networks. This technology is still in use, however, in digital broadcasting: many DAB radios use chips from Toumazou’s first spin-out, Toumaz Technology, to tune into whichever of the multiplicity of frequencies are used to broadcast in different countries.

The low-power aspect of the chips and their ability to perform complex calculations soon attracted interest from the medical community and this led Toumazou into the area that now dominates his work. ‘A particular company in Canada was interested in cochlea implants, because the conventional ones had whacking great wires from electrodes on the nerves of the inner ear, running to a big microprocessor doing the number-crunching. It wanted to see if it could use these low-power technologies to reduce that to a single chip that could be implanted.’

It was this, Toumazou said, that gave him the clue that analogue technologies were ideally suited for use with biological systems, and particularly in medicine. ‘In the human space, we don’t see, hear, or think with 20-bits of precision. So when it comes to interfacing with technology, we don’t need all the precision offered by the digital world. We are analogue devices. Why interface an analogue device with a digital one when we can use something it can communicate with?’

Toumazou believes that mobile phones are not only a proving-ground for potential medical technologies, they are also an ideal vehicle for conveying crucial data to clinicians. ‘Look at all the investment in semiconductors, mobile telephony and computers: all that novelty, all those ideas for circuitry. Surely we can transfer that into the medical domain? And also, with mobile telephony, the wireless aspects mean that we can look at continuous monitoring. That means that we can get monitoring out of the hospital and into the home, using the mobile-phone technology to disguise or even hide the medical device.’

The advantage of this, he said, is to monitor people in such a way that they aren’t conscious of being monitored, by using sensors embedded in ‘digital plasters’. No more obtrusive than a normal sticking-plaster, these incorporate Toumaz Technology’s Sensium chips, based on the same technology as the self-configuring DAB chips, and can constantly monitor vital signs such as ECG, blood pressure or temperature. 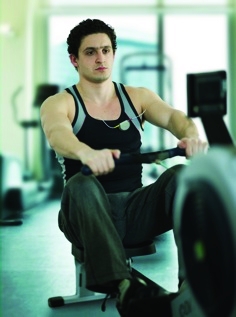 ‘The plaster is on power paper, a type of ultra-thin battery, and it incorporates: a sensor that can act as an ECG, a thermometer, a blood-pressure sensor and so on; and an analogue chip that does all the number-crunching. It also has a low-power radio, an order of magnitude lower than Bluetooth. When it detects an anomaly or a variation, it sends a signal to a PDA or something else with a modem in the house, which sends an SMS to the clinician. They can then request a download of the whole day’s data to decide whether this was a consistent problem or a one-off.’ This, he explained, has the potential to cut the cost of chronic-disease management by millions of pounds, by providing early warning of worsening health and keeping people out of hospital unless absolutely necessary.

The system is currently under trial and Toumaz is working with a major distributor of medical disposables, Cardinal Health, to get the technology into hospitals and then homes.

Similar technology is also under trial in a diabetes treatment, where analogue semiconductor chips have been configured to mimic the function of pancreatic beta cells that usually regulate insulin. ‘We have a glucose sensor measuring blood sugar, the semiconductors doing the number crunching, and we’re using that on the input of an insulin pump. So the whole system continuously monitors blood sugar and secretes the amount of insulin required at any time to keep them in balance.’ The system is currently undergoing early clinical trials and could be deployed to type 1 (insulin-dependent) diabetics in the next few years; similar systems could also be used to regulate dialysis by monitoring creatinine, Toumazou said, or to dispense anticonvulsant drugs by monitoring neurotransmitters or nerve signals. 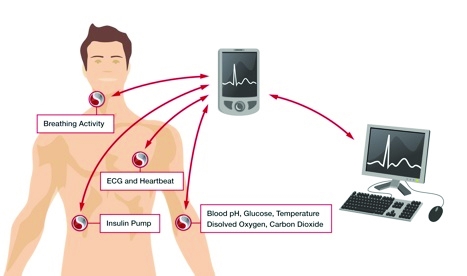 Another project is using semiconductors to detect single-nucleotide polymorphisms (SNIPs), the small mutations in the genome that distinguish one person from another. Some of these are medically significant, for example the ones that determine whether someone can metabolise a particular drug.

Toumazou added: ‘I was working with ion-sensitive semiconductors that we had coated with an enzyme that allowed them to measure glucose levels continuously. But they started to drift because of the variation in blood sugar. So we thought about what in biology doesn’t drift and came up with DNA. We can coat the semiconductor with DNA that will bind to these particular mutations in the genome, then a doctor can get a DNA sample from saliva, put it on a silicon probe and find out in seconds whether the patient had that mutation and, for example, whether they could be treated with an anticoagulant such as warfarin.’

Toumazou credits the culture of interdisciplinary research at Imperial College for his innovations. He said: ‘One of the advantages that Imperial has is that we have clinicians and engineers working in the same environment; it is a unique position.’

He believes that it was the appointment of a rector from industry, Richard Sykes, that fostered this. ‘When Sykes came over from GlaxoSmithKline in 2001, he was disruptive enough to knock all the engineering departments together to make a faculty, and to do the same with medical, natural sciences and so on, and then to make interdisciplinary institutes that are real, not virtual, where physicists, chemists, engineers and medics can work together at the same bench. That’s an example of the good things that can happen when you bring business into a university; you need strong leadership to break the mould.’

One result of interdisciplinary research is that it tends to occur on the borders between traditional subjects. ‘I believe there’s much more IP in interdisciplinary ideas than in single-ingredient research,’ Toumazou said. ‘And we’re also finding that the next-generation academic is more entrepreneurial than ever before. When you get these people together and see how they generate ideas, you just can’t beat it.’

Fuel of the future