ERM’s pioneering Dolphyn project – the first of its kind in the world – aims to produce ‘green’ hydrogen from floating wind turbines situated miles out to sea. Jon Excell reports.

Abundant, versatile, energy dense and clean at point of use, hydrogen is viewed as an increasingly important component of our future energy mix and key to the decarbonisation of our heating and transport systems.

The problem is that the bulk of the hydrogen currently used is derived from fossil fuels using processes that the International Energy Authority (IEA) says is responsible for around 830 million tonnes of CO2 emissions per year.

Clearly, if hydrogen is to truly deliver on its environmental potential, cleaner methods of production are going to be critical, and the winner of this year’s energy and environment category  ERM Dolphyn (Deepwater Offshore Local Production of HYdrogeN) offers an inspiring and highly innovative  example of how that could be achieved.

Led by environmental consultant ERM, the project  – which will be a world first- is looking at producing green hydrogen from electrolysers that are directly coupled to floating wind turbines far out at sea.

Project director, ERM partner Kevin Kinsella explained that the team is initially aiming to get a 2MW proof of concept unit up and running in a consented area around 15km off the coast of Aberdeen by 2024.

This will be followed by a full scale 10MW pre-commercial unit, likely connected to the low pressure gas distribution network in Aberdeen by 2026 with the ultimate aim to deploy a 4GW array of floating 10 MW wind turbines in the North Sea by the early 2030s.

CLICK FOR MORE ON SHORTLISTED ENTRIES TO ENERGY & ENVIRONMENT

The design is currently at FEED (front end engineering design) stage and consists of a large scale floating wind turbine (10MW) with an integrated water treatment unit and PEM electrolyser for localised hydrogen production. It incorporates its own standby power unit, supplied by hydrogen stored on the facility, and is therefore completely autonomous, requiring no electrical connection to shore.

Hydrogen generated by the initial units will be exported to the shore via a three-inch diameter flexible pipe,  but for larger installations the green hydrogen generated by each turbine would be exported at pressure via a single flexible riser. This would connect to a sub-sea manifold, with lines from other individual turbines in the field, and the hydrogen exported back to shore via a single trunkline. 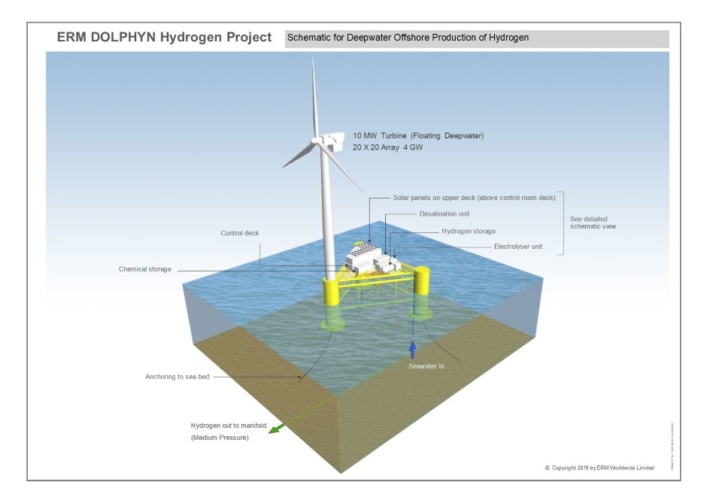 Whilst there are a number of projects around the world exploring the use of offshore wind to generate hydrogen, most of these are focussed on using electricity derived from wind power to drive electrolysers on the shore. One of the key innovations of ERM Dolphyn is that it couples the electrolysis and wind turbine in a marine environment and uses seawater, via onboard desalination, to produce green hydrogen at scale.

Explaining the decision to directly couple the electrolysis to the turbine in this way, Kinsella said that the team initially explored a number of options, such as bringing power back to a centralised platform with electrolysers before piping hydrogen back to shore, or performing electrolysis onshore, but went for direct coupling as it avoids the need for expensive cables, switchgear, and grid connections. “It’s a much cheaper way of doing it over long distances and you don’t get the energy losses that you do with bringing it back electrically,” he said.

Freeing the system from the constraints of grid connectivity also makes it easier to build further out to sea where the wind resource is more plentiful, and it’s possible to build large scale installations without impacting shipping routes or raising environmental concerns.

Whilst the concept is being developed and led by ERM, collaboration has been key to its success so far. Energy firms Tracetebel Engie and Principle Power (PPI) are responsible for the floating sub-structure design  the wind turbine, whilst ODE is responsible for the Dolphyn topsides including the desalination and stand-by power unit. Meanwhile, electrolyser specialist NEL and engineering giant Doosan are responsible for the electrolyser design and its integration into the overall system and ensuring that it can withstanding offshore conditions. 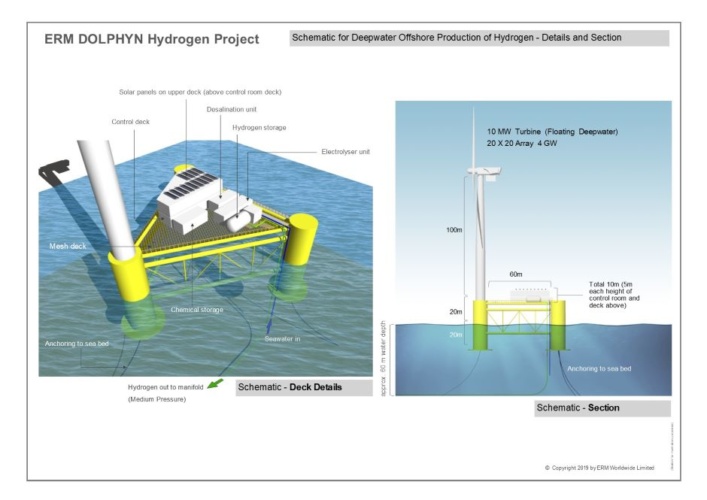 “One of the most satisfying aspects of the project to date has been the desire of all parties to make Dolphyn a success,” said Kinsella.  “Everyone working on the project is excited and aware of the enormous potential that the technology has to produce green hydrogen at scale from the outstanding offshore wind resource that is available in the North Sea and other UK deepwater locations. This has resulted in a highly motivated team with a strong ‘one-team’ mentality, with openness to discuss and resolve a wide range of technical and operational issues to improve the design and the commercial performance of the technology.”

Kinsella said that a 4GW Dolphyn array could produce enough hydrogen to heat 1.5 million homes, paving the way for a transformation of the UK’s energy landscape. “There’s no reason at all why, by the end of the century, the whole of UK heat couldn’t be provided by green hydrogen from offshore North Sea wind”, he said.

It’s a tantalising vision, and one which is well within the UK’s grasp, thanks to both its geography and the wealth of expertise and infrastructure that can be found in its offshore oil and gas industry. “We’re in the best position in Europe, having the best wind resources by far. We have a leading offshore oil and gas industry and offshore wind industry, supported by the best supply chain in Europe, and all of the technical resources and knowhow to deliver it. With Net Zero by 2050 written into UK law, this is a fantastic opportunity for the oil and gas industry to transition smoothly from fossil fuels to green energy, using the same skills and resources, and at the same time become a net exporter of green energy to Europe.”