As part of the Indian government’s plan to revitalise the country’s railway system, researchers at Raychem RPG designed an autotensioning device and modular cantilever for catenary and contact lines using structural modelling and optimisation.

The railway network is the backbone of the Indian transportation system, connecting remote villages and towns with metropolitan cities across the country. Recent government initiatives aim to revamp and modernise the entire network by 2030 and the past couple of years have already brought many changes to the rail system. From a technological perspective, we can expect two notable changes to Indian railways: the introduction of electric and solar-powered trains and an increase in the operating speeds of trains from 100 km/h to 160–220 km/h. To support these plans, suitable modifications must be made to the existing infrastructure and components, such as the overhead equipment (OHE), including catenary and contact lines, as well as pantograph assemblies.

Raychem RPG, a pioneer in innovative energy solutions for various sectors, has a dedicated team working on products that can meet the challenging requirements of the evolving railway network. The team of scientists and researchers, led by Mr. Ishant Jain, has improved the designs of autotensioning devices (ATD) and modular cantilevers (MC), two of the most critical components of the railway’s overhead equipment, using multiphysics simulation.

In an electric rail system, power is supplied by overhead lines that run along the entire length of the railway track. This power is transferred to the train by means of the pantograph, which is a current collector mounted on top of the locomotive. The ATD (Figure 1, left) provides a mechanism for automatic tensioning and serves as a termination point for the contact lines. Tensioning is needed on the contact lines due to the variation in their lengths: Contact lines are primarily made from copper-based alloys, which are prone to expansion and contraction due to variations in atmospheric temperature. The conductors of overhead lines are installed with a very specific tension value. This tension is variable over time and is closely dependent on the ambient temperature. The absence of tensioning causes the overhead lines to sag or tighten, leading to pantograph entanglement or snapping of the overhead equipment (OHE) lines.

Similarly, overhead MCs are designed to support the assembly of overhead power transmission wires — i.e., catenary (1000/1200 kgf tension), contact (1000/1200 kgf tension) and droppers — to transfer the overall bending, transverse and vertical loads to the mast via insulators (Figure 1, right). The quintessential cantilever is lightweight and robust enough to support the current-carrying assembly with train speeds up to 250 km/h. In addition to these functional requirements, ease of maintenance, transportation, handling and aesthetics also need to be considered.

To ensure the safety of rail passengers at high speeds, the ATD has stringent design requirements. To determine the correctness and efficiency of an ATD design experimentally, a pull-out test is performed. A large experimental setup is required for such a test, which is not practically feasible at all times. The team at Raychem RPG, working out of the Raychem Innovation Centre (RIC), was tasked with designing an ATD that is both light in weight and highly sensitive to temperature fluctuations, while providing ease of service, assembly and maintenance.

In addition, the MCs that can be imported from European and American markets are bulky and include many ancillary components. As part of the “Make in India” initiative of the Indian government, the Raychem team’s objective was to come up with a novel design to eliminate these ancillary components while ensuring structural integrity by efficiently using material, which ultimately saves costs and reduces weight.

To achieve both design goals, the Raychem team used TRIZ, a theory for coming up with innovative solutions to problems, for generating and conceptualising various ideas. They then turned to the COMSOL Multiphysics® software for optimisation and design validation as per the railway’s standards.

Using COMSOL Multiphysics® and its add-on modules, the Raychem team structurally optimised the individual components of the ATD, while also performing a multibody analysis to study the coupled motion of these components for a system-level analysis. The team first imported a typical assembly (Figure 2) and then applied the appropriate boundary conditions to account for the effects of dynamic loading. They performed a study to find the tension in the outer cable along with the variation in spring force. 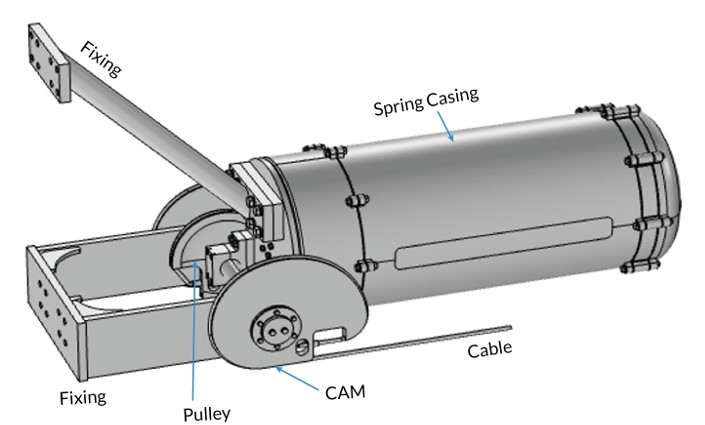 Figure 2. Geometry of the ATD.

The results of the analysis (Figure 3) represent the cable displacement and tension. It can be clearly seen that the tension remains unchanged, which accomplishes one of the objectives of the project.

Figure 3. Cable displacement on the applying load (left) and tension in the cable (right). 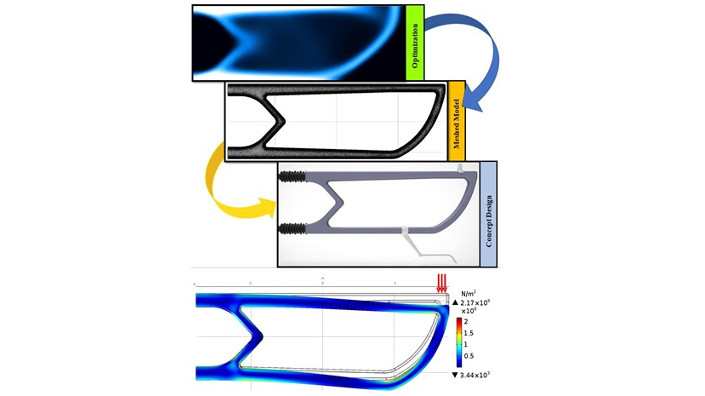 Using topology optimisation, the system’s mass was reduced by 75% compared to the initial geometry (Figure 4, top) — without violating the design specifications. A 3D model was then created using the optimisation study and later subjected to both static and dynamic structural loading (Figure 4, bottom) to emulate the impact of a train moving at 250 km/h.

Using the observations from the simulation analyses, the entire ATD assembly was completely redesigned to incorporate a foldable design with a 50% reduction in the assembly size. Moreover, Jain’s team also replaced the metallic spring with a polymer spring, which was designed using the Nonlinear Structural Materials Module, an add-on to the Structural Mechanics Module and COMSOL Multiphysics®. All of these design changes led to an 80% decrease in the weight of the entire assembly. “With the help of the structural and multibody analyses we performed on the ATD, we were able to reduce the number of components from 20 in the earlier design to just 8,” says Jain.

Further, a simulation model was established to optimise the conventional overhead modular cantilever with the help of topology optimisation in COMSOL Multiphysics®. The resulting model was used to create a simplified design concept and was later subjected to a detailed structural analysis in terms of strength and vibration modes to verify the optimised results. Simulation was instrumental in reducing the design complexity, with the number of components reduced from 12 to 5 and the weight reduced by approximately 33%. Out of the two designs proposed, the Indian Railways Board has already accepted one design while the other is in the approval stage. According to Jain: “Structural optimisation of the modular cantilever assembly with COMSOL® has enabled Raychem to secure four patents for our different designs.”

The Track Ahead: Future Plans at Raychem

With the modifications expected in the Indian railway infrastructure over the next decade, the team at Raychem Innovation Centre is now using COMSOL Multiphysics® to develop more new OHE products for the Indian Railways. In addition to projects in the energy utility and oil & gas sectors, the railway system is now another specialised area for which Raychem RPG will continue to provide innovative solutions with the power of multiphysics simulation.

Ishant Jain would like to acknowledge the following persons for their assistance in the research described in this article: Ganesh Bhoye, Nitin Pandey, Raghav Upasani and Hamza Saiger.

Siemens and Google Cloud to collaborate on industrial AI