The Ministry of Defence has awarded around £72.5m to UK industry consortia, headed by Thales and Raytheon UK, for production of Directed Energy Weapons. 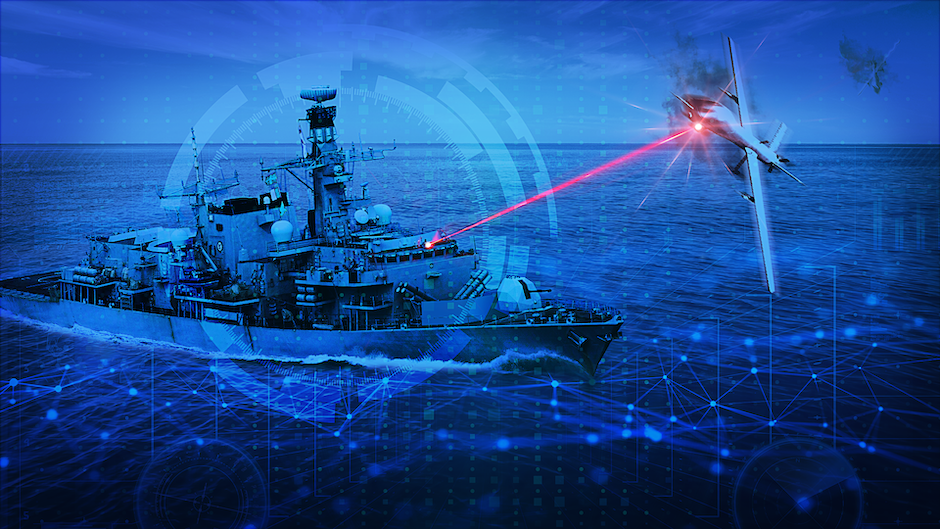 Part of the Novel Weapons Programme (NWP), the announcement will see significant investment in the development of directed energy engineers including around 30 new jobs to be created at Thales’ site in Belfast, Northern Ireland.

Three DEW capability demonstrators will be developed as part of the investment. The first laser demonstrator (LDEW), led by Thales, will undergo user testing onboard a Royal Navy Type 23 frigate by detecting, tracking, engaging and countering Unmanned Aerial Vehicles (UAVs). Partners will include BAE Systems, Chess Dynamics, Vision4CE and IPG.

The British Army’s Wolfhound armoured vehicle will host another laser demonstrator, developed by a consortium led by Raytheon, that will investigate capability against UAVs and other air threats. Frazier Nash Consultancy and NP Aerospace will work alongside Raytheon on this.

Thales will also lead development of a radio frequency (RF) demonstrator, which will be used by the British Army, hosted on a MAN SV truck to detect and track air, land and sea targets. This will involve collaboration with Qinetiq, Teledyne e2v and Horiba Mira.

“We’ll be part of the whole process of design, manufacture, integration, supporting the programmes once they’re on deployment, and then involved in the data analysis and system performance analysis when the systems come back after trials,” said Philip McBride, managing director, Thales Northern Ireland.

MORE DEFENCE NEWS FROM THE ENGINEER

The laser and radio frequency systems could offer benefits such as reduced operating costs, increased endurance and flexibility for the UK’s Armed Forces.

Reduced risk of collateral damage is also expected to be a key advantage, McBride added, due to the high accuracy and precision of the DEWs. If successful in trials, the LDEW system could be deployed on a broad fleet of ships, he told The Engineer, whilst the RF DEW capabilities could be applied to many small military vehicles provided the power requirements allow.

The demonstrators will undergo user experimentation from 2023 to 2025. This will focus on operation and maintenance of the new systems and aims to provide knowledge and experience to assess whether DEW can be fully integrated into other defence assets.

“One of the biggest issues we have with any LDEW technology is how you can hold a spot of radiation on a small moving turning target, which is agile, in the battle space,” said McBride. “So for us, pointing with accuracy and precision is something we can do and that’s why the contract has come our way — that needs to be further developed, because you absolutely need to keep energy on the target for a fixed period before it has any effect.”

Thales’ recruits will include software engineers, electronic and mechanical engineers, laser specialists and RF specialists working on the programmes remotely as well as out of its Belfast base on top of its core team in Northern Ireland.

This will provide opportunity to develop broader skills within the business for the current programmes as well as for future capabilities, McBride added, bringing in young engineers across the entire programme life cycle.

“For engineers that join us, they’re right at the start of a new product line which isn’t going to go away. The MOD have set aside a lot of finance to take these weapons into full scale production, provided the demonstrators deliver what they need to — and we’re very well positioned for that, as are our new recruits and the ones who’ll follow them.”