The skills shortage in engineering is widely recognised, and plugging the gap isn’t an overnight process, but plug it we must if we are to gain around 186,000 recruits to the engineering sector each year until 2024 – which is the reported estimated requirement to reduce the skills shortage.

And with raising awareness of STEM subjects being a key tactic in helping this cause, it’s something RS Components has been working on for a number of years – developing its own initiatives, and working with partners on existing initiatives, to maximise reach and engagement among schoolchildren. Inspiring them at a young age is key to bringing STEM subjects back to the fore and increasing the uptake.

Some of the most successful initiatives in recent times have included participation in the government’s Year of Engineering (YoE) campaign – which ran throughout 2018 – shining a spotlight on engineering and the vast array of career choices and options available in this area. With the aim of inspiring schoolchildren about a career in engineering, the initiative brought together education organisations and industry to work collaboratively in the quest to raise awareness of, and help tackle, a serious issue.

A vehicle for inspiration

The RS Titan II truck was on hand at a YoE event held at Kings Cross, showcasing an array of technologies used in industry today – from 3D printing, virtual and augmented reality, and IoT, through to Raspberry Pi, robotics and the RS’ DesignSpark platform. Since its launch in 2017, Titan II has welcomed more than 50,000 under 18’s on board, and has also been used as a vehicle to inspire and excite children about engineering both at workshops and events held by RS, and at exhibitions such as New Scientist Live, Big Bang (Sussex, Northamptonshire, Weston Super Mare) and the National Big Bang Young Scientists Fair, held annually at the National Exhibition Centre in Birmingham. Titan II also tours the UK and Ireland visiting colleges and universities, and hosting STEM days. 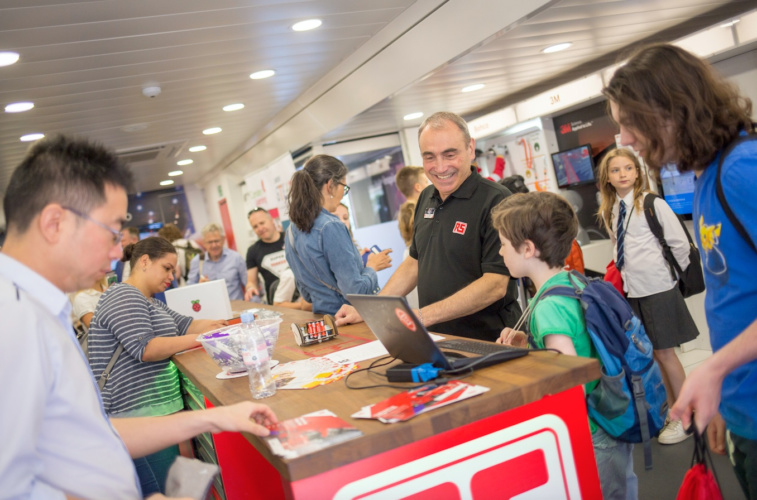 RS has also been involved in the STEM Learning programme since 2016, and launched a recruitment drive for STEM Ambassadors within the organisation nationwide. Since its inception four years ago, the RS STEM network has grown to more than 200 STEM Ambassadors, supporting various events to inspire young people to consider STEM careers. These ambassadors are key participants in many of the events held by RS to inspire schoolchildren into STEM subjects, such as the three-day STEMFEST event RS hosted in 2019, which will become an annual event. RS also supports external campaigns, competitions and challenges such as the FIRST® LEGO® League and Teentech programmes. RS STEM Ambassadors help to bring exciting technology such as Raspberry Pi, Arduino, 3D printing and robotics to life in fun and inspirational workshops.

Of course, proving impact is always important both to ensure the cause is being helped and that there are tangible results and successes from what is a considerable investment. As well as hosting more than 50,000 young people on Titan II since 2017, on the occasions when Titan II has not been present. RS, together with its educational partners, has engaged with more than 20,000 young people through the delivery of various workshops, careers talks and activities at STEM events. According to STEM Learning’s Impact Report for 2019, 90 per cent of STEM Ambassadors say that volunteering as an ambassador has increased their job satisfaction, 91 per cent of schools, colleges and community groups report increased enjoyment, interest and engagement in STEM subjects, and 81 per cent of teachers say that working with STEM Ambassadors has increased their understanding of STEM business and industry.

Organisations and industry players have a duty to get involved at whatever level they are able to. With the huge reliance on engineering technology from a variety of industries – IoT, automation, smart factories and cities are clearly the future – the UK engineering industry must have access strong pipeline of engineers. The skills shortage must be tackled as a priority and everyone must play their part.