W. L. Gore & Associates fosters a culture of innovation through a start-up mentality, despite being 60 years old

Materials science business W. L. Gore & Associates is sixty years old, but to look at its culture and structure you would think it was a start-up. The business, which is referred to as an ‘Enterprise’ fosters a work environment where ‘Associates’ (employees) are encouraged to exercise their natural curiosity and innovative spirit in ways that influence everything Gore does. This culture of innovation was set out by Gore’s founders, Bill and Vieve Gore, back in 1958, and their philosophy and principles still define the Enterprise decades later, enduring global expansion and growth.

CLICK HERE TO VIEW A TIMELINE OF INNOVATION AT W.L. GORE & ASSOCIATES

Innovation runs through Gore’s DNA. You can see this by reviewing the diverse list of products that they help create, including implantable medical devices such as vascular grafts, protective clothing, data transmission cables aboard the International Space Station, automotive fuel cells, guitar strings and mobile phone vents. All of these items have high societal value, and all rely on Gore’s flagship fluoropolymer, expanded polytetrafluoroethylene (ePTFE). This revolutionary material has amazing properties; it’s lightweight, porous, strong and versatile. It can withstand the harshest of conditions, which enables Gore to help its customers address their greatest technical challenges – be they in space, below the sea or in the heat of a fire. 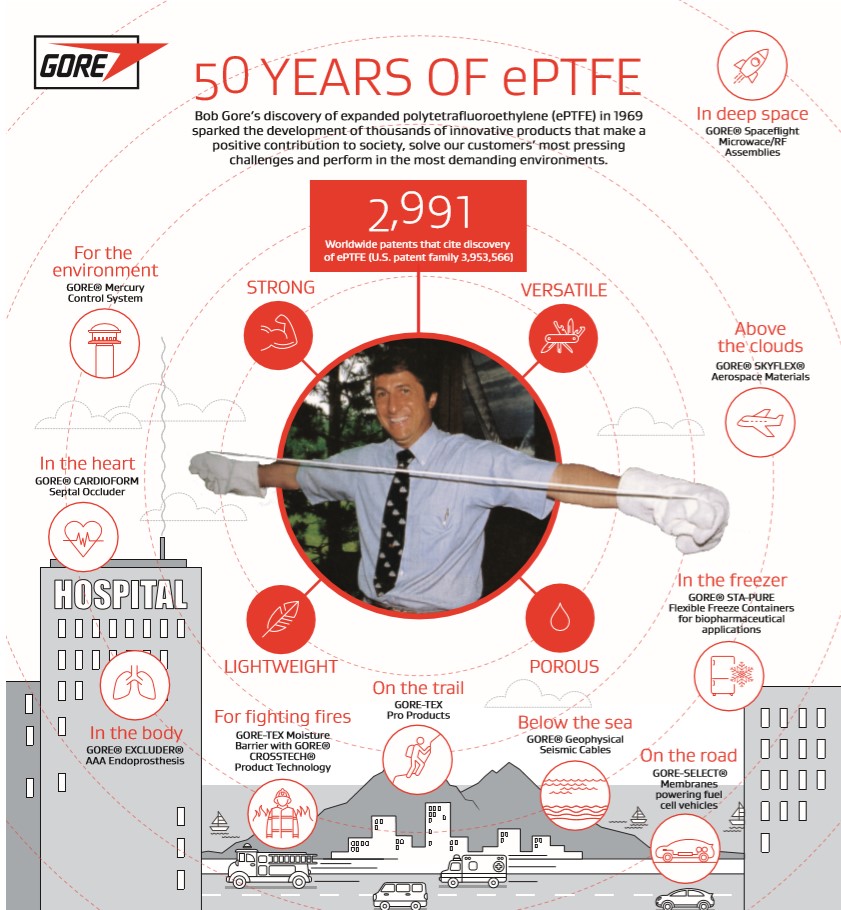 The discovery of ePTFE fifty years ago in a moment of frustration, demonstrates the restless curiosity of Associates. It was Bob Gore, former president and chairman of Gore and son of founders Bill and Vieve, that discovered ePTFE while he was experimenting late at night.  He was attempting to heat and stretch a widely used polymer, but was getting nowhere. Just as he was about to give up, he yanked in frustration on the material and it unexpectedly expanded the full length of his outstretched arms while retaining its original diameter. It took Gore no time at all to appreciate that this new ePTFE material had unique microstructures that could be used in a vast array of industries and applications.

The original patent awarded to Gore for this development has been designated as one of the U.S. Patent Office’s top 200 patents (out of more than 10 million patents issued). The original ePTFE patent is cited 2991 times, that’s even more often than the patent for GPS technology or ink jet printing. It covers everything from STA-PURE Flexible Freeze Containers for biopharmaceutical applications, Geophysical Seismic Cables for use below the sea and GORE-TEX Moisture Barrier with GORE CROSSTECH Product Technology used by firefighters. It’s no wonder their brand promise is Together, improving life.

“It has been 50 years since Bob Gore discovered these new properties and effectively began the sequence of ePTFE innovation we now know and continue today,” said W. L. Gore & Associates president and CEO Jason Field. “The monumental impact ePTFE continues to have, not just on Gore as an Enterprise, but on thousands of other inventions across diverse industries, is truly revolutionary and immensely beneficial,” Field concluded.

Since ePTFE’s landmark discovery, Gore has further developed its expertise in utilising the material for a wide range of uses. Today, Gore engineers can alter specific attributes of ePTFE, such as structure, shape, and thickness in order to achieve desired performance in a variety of applications and markets.

This distinctive culture of innovation that encourages  Associates to pursue projects that interest them and that match their capabilities gives Gore a competitive edge. If innovation is the lifeblood of your business, it makes it easier to solve problems as well as huge challenges. Innovative businesses appreciate that failure also leads to success.

It’s a culture that doesn’t suit everyone. Motivated people thrive at Gore, but individuals who appreciate hierarchy and process can feel lost. Most Associates either leave after a short spell, or have a very long tenure. Gore has a great track record of finding, nurturing and retaining talent, and it has a long and impressive history with the Best Companies to Work league table. It’s no surprise why. Driven by Gore’s brand promise Together, improving life Associates are empowered, encouraged and inspired by their workplace culture.

Aged just 17 Sheona Barlow finished school on 19 May 1986 and started the very next day at W.L. Gore & Associates. She’s been there ever since, making her one of the longest-serving UK Associates. At the time she joined as the receptionist, a position she held for six months before she took on a new commitment in a sales position. That was to be the first of many new opportunities Sheona has had over 34 years leading to her current role as Plant Leader, leading 150 Associates. Sheona’s impressive career trajectory from receptionist to Plant Leader at Gore Dundee is all the more remarkable given she’s a woman operating within a typically male science and engineering world. 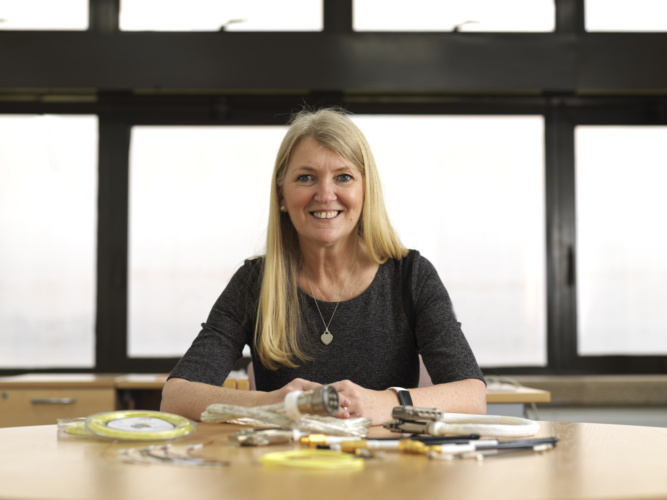 You didn’t attend University but learnt your trade on the job with additional studying. Would you recommend on-the-job learning to others or academic learning?

It’s hard to answer as it’s very situational. It was good for me to get straight to work and figure out what career path I might take, but if someone knows what they want to do, such as my son who studied computer science, then I would encourage higher learning. It depends where they are in their mind about the choice of their vocation, but it’s a myth to say that science degrees are essential for STEM jobs

What advice would you offer school students or graduates when they are starting out in their first job?

Be flexible. You might think you’re heading in one direction but something else might come along that’s actually more of your sweet spot. Be adaptable. Work hard, and let others see that you’re working hard. But mostly, find something you enjoy.

What’s been the secret to your career progression success at Gore? Do you think you would have progressed so well elsewhere?

A lot of hard work and others believing in me. Also, curiosity – I asked lots and lots of questions even when I was typing on reception aged 17 and that drove me down a path. Be happy doing what you’re doing you’ll have positive results. Would I progress so well elsewhere? Possibly not. If I had moved into a larger organisation I might have been lost. At Gore we all work together in small cross-functional teams, so we know each other well and recognise each other’s capabilities and I think that really gave me the opportunities I’ve had.

What’s the biggest achievement you’ve had to date?

In the late 90’s I was doing the qualification for a product that was going into the Euro Fighter aircraft, which was brand new at that time, and I was doing all of the qualification for the cabling. It was our biggest contract win to date at the time and in fact we still supply them with cable now. More recently I’m really proud that the Dundee plant won the opportunity to develop the Space Centre of Excellence for Gore. It’s really helped put us on the map.

What personality attributes are needed to thrive at Gore, and do you think you embody these characteristics?

Associates need a lot of self-drive and motivation, an innovative spirit and be a good team player. I’m naturally curious so I am well suited to Gore. Associates also need to be ok with ambiguity – so it’s not ideal for people that like things to be black or white.

Jeff Fyfe from Dunfermline has worked at W. L. Gore & Associates for 39 years. He joined Gore aged just 16 as a Drafting Assistant with responsibility for technical drawings of Gore’s cables and cable assemblies. When he joined fresh from school he was the youngest Associate. He is now the longest serving within the UK. At Gore he was the first UK Associate to embark on a further education programme, gaining a ONC in Electrical and Electronic Engineering. He now has global responsibility for the Enterprise’s space division, pioneering their cable portfolio to meet the growing demands of a booming sector. 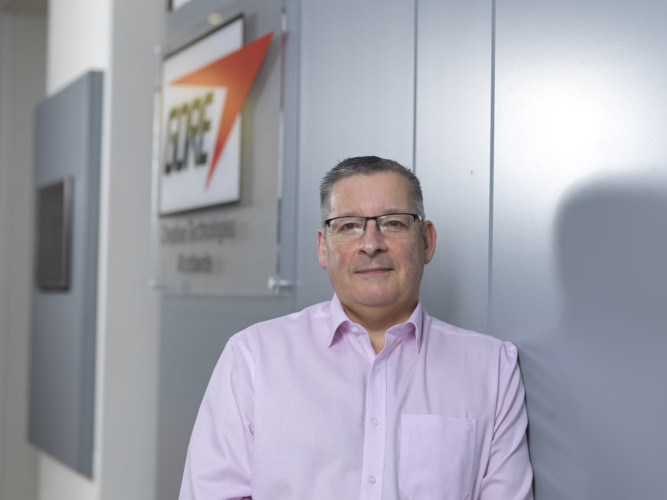 What do you think is Gore’s biggest impact on society? In which field has it benefited society the most?

I would have to say our medical products – the way it helps improve lives. That’s not to say that our other products don’t have value, but I can speak with authority having some Gore-Tex products inside me. A few years back I needed to have a hernia patch and I asked if I could have a Gore patch but was told it wasn’t on the menu, so I asked if I could provide my own ingredients. Once I explained who it was I worked for he was still surprised when a friend of mine who had just moved over to the States sent the patch over through the post. He used one on me and that was 14 years ago and it’s still in me, so I can speak with authority when I say medical has had the biggest impact on society.

What’s Gore’s biggest achievement in the aerospace sector to date?

The recognition of the quality of our products and the failure free heritage. Last year we celebrated the 50 year anniversary of the moon landing with Neil Armstrong, and our products went to the moon with that journey. It’s a great achievement to be able to claim that we were pioneers with NASA and the astronauts.

Why is there so much current interest in the space industry?

It’s a hugely exciting industry to be working in right now. There’s a start-up boom within the space industry. The likes of Richard Branson, Elon Musk and Jeff Bezos have recognised the vast opportunities space presents and are investing in space tourism and connecting the world, and the UK is really well placed to capitalise on it. Approximately 25,000 new satellites will be launched into space within the next three to five years to help digital growth and connect the world.

How is Gore attracting the brightest aerospace talent?

So we haven’t found there’s a talent problem at the moment. We spend a lot of time at trade shows and are part of industry organisations and they have their links into universities and schools. Obviously the moon landing anniversary will have inspired a whole new generation of space enthusiasts, so who knows what kind of direction that might take young minds in the future.

How do you think Bill Gore would feel about the size and scale of the Enterprise now? Do you think he ever envisaged it would grow this big or be so far reaching?

Bill had a vision, and that vision is now being realised in all of the Associates we have. We went to the moon within the first 10 years of our Enterprise being established, and at that time we had only 180 Associates. Today we have over 10,000 and our enterprise is flourishing. I personally think that Bill and Vieve knew exactly what they were embarking on all of those years ago. They would be proud to see what everyone has achieved so far. But of course, success is a journey, it is not a destination, and the future looks really great for the Gore enterprise.