Japanese toilets incorporate a fascinating array of technologies and are starting to take off in the UK. Andrew Wade reports

Japan’s electronic toilets are something of a cultural touchstone for the rest of world. They embody the country’s forward-thinking, futuristic society, as well as its deep respect for water and ritual ablution, rooted in the Japanese ethnic religion of Shinto. For many in the west, these high-tech toilets are as quintessentially Japanese as sushi or karaoke. Yet the concept did not originate there. 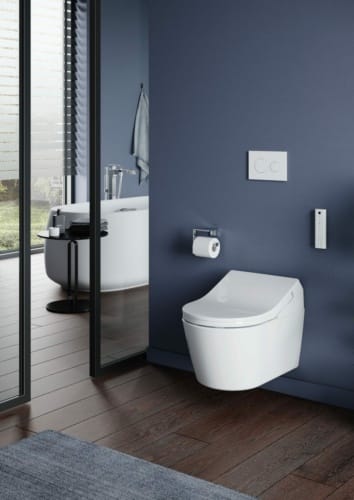 The first toilets with integrated bidet or ‘shower’ features appeared in the US in the 1960s. These were non-electronic devices that sprayed water at ambient temperatures and were largely used in hospitals. It was not until Japanese toilet manufacturer Toto took up the baton that the concept truly took off and made its way into domestic bathrooms.

Toto’s first Washlet product was released in 1980 – an attachable electronic toilet seat with integrated rear washing, drying and heating functions. In 2019 the company celebrated its 50 millionth global sale. In the intervening years, the term ‘washlet’ has been genericised in Japan, becoming synonymous with ‘shower toilet’ in much the same way that ‘hoover’ has with vacuum cleaners in the UK.

“Around 32 per cent of homes have a dishwasher in Japan,” explained Floyd Case, specification and projects manager for Toto Europe. “Whereas 80 per cent have a washlet.”

It’s an astounding level of adoption that’s yet to be replicated outside Japan, but Case believes this is slowly changing and Toto’s impressive London showroom is testament to the company’s efforts to spread the good word. Although best known for its Washlets, Toto was founded all the way back in 1917 and is one of the world’s biggest toilet manufacturers. It employs 25,000 people, 900 of whom work in R&D. For western luddites not quite ready for the full-blown electronic bidet experience, Toto can point to plenty of other high-tech wizardry.

Around 2002, the company decided to reimagine the toilet from the ground up, incorporating a rimless design, a hydrophilic zirconium glaze and an entirely new flush dynamic called Tornado Flush. This last feature employs complex CFD analysis to remove waste more efficiently, using less water and comprehensively cleaning the inside of the bowl with a swirling action from multiple entry points.

“It’s basically a twin-axis flushing system, so the water is made to rotate vertically in the bowl, but also horizontally,” said Case. “The key thing is we’re making the water work much harder, accelerating the energy in the water… we’re using physics as opposed to brute force to get rid of the waste.”

According to Case, the company is constantly looking for incremental improvements in this flushing mechanism, using some of Japan’s most powerful supercomputers to optimise its ceramics modelling. The result is claimed to be a toilet with a quieter flush that outperforms competitors in removing waste.

“What that means on a practical level is that Mr & Mrs Jones flush the toilet once and it works,” said Case. “Or if you’re a hotel or a commercial building, you’re saving water and you’re reducing blockages, which is key, because there’s less maintenance.”

The flushing mechanism is complemented by the hydrophilic glaze on the ceramic that not only reduces friction but also attracts water, creating a sheen that enables the bowl to self-clean. A Toto subsidiary, Hydrotect, specialises exclusively in these types of coatings and licenses the technology for self-cleaning glass for skyscrapers and anti-bacterial tiles.

“Conventional ceramic, under a microscope, isn’t very flat,” said Case. “You’ve got all these microscopic pits in the surface, which is where bacteria and dirt can get a foothold.

“A hydrophilic surface means that water acts differently to conventional ceramic. When you put these things together with that powerful flushing system, the toilet maintains itself much better.”

Embedded within Toto’s ceramic are titanium dioxide, zirconium and other minerals and elements that create a photocatalytic reaction that helps eliminate bacteria. While it works perfectly fine by itself with no electronic assistance, several of the features on Toto’s Washlets are designed to enhance this photocatalysis.

Before use, the Washlet sprays a pre-mist that prevents waste sticking to the bowl. After flushing, a mist of electrolysed water – or e-water – with antibacterial properties is then sprayed. Finally, once the seat is closed, a UV light in the lid comes on, reacting with the oxygen in the electrolysed water and the ceramic coating to break down dirt and keep the toilet clean. According to Case, Toto is the only sanitaryware company to use electrolysed water in this way.

“We’re using normal water but we’re changing its properties within the seat itself by passing a small current through it,” he explained. “Using an anode and cathode principle we can extrapolate the hypochlorous acid in tap water and increase the potency of it… creating a disinfectant from normal water.

“After the Washlet’s been used it goes through a clean cycle where normal water goes in, we create the e-water, and that’s used then to clean the wand and sprayed into the bowl. It’s done after every use and it’s not a stagnant tank, you don’t have to fill it up, you don’t add any chemicals.”

The wand is kept behind a flap and housed above the rim of the toilet itself, in a clean area away from the ‘action’. When called upon, it emerges to spray pre-warmed water at a precise 43-degree angle, apparently the most efficient for cleaning without itself coming into contact with waste. It’s made from a silicone-based material that’s naturally anti-bacterial and is cleaned inside and out between each use.

As well as front and back washes of varying pressures and temperatures, most models provide a pulsating function designed to help the user get down to business. Other standard features include automatically opening/closing and heated seats and built-in deodorisers.

“It has a deodoriser system built in,” said Case. “That’s extracting the air from within the bowl, sucking it out through a pre-filter and main filter. The main filter is a carbon filter, so it’s neutralising the odour and then putting the air back in the room.”

All these bells and whistles do require a dedicated power and water supply, which is easy to include off-plan but not so easy to retro-fit – one of the reasons shower toilets have failed to penetrate western markets to anywhere near the same degree as Japan. But Toto’s products can increasingly be found in high-end London hotels and restaurants, as well as new apartment complexes. For the great unwashed to be converted, Case argues, they first have to experience the magic, and the same goes for builders and developers.

“The biggest challenge we have is getting people to think about the toilet,” he said. “I think a lot of design and construction is more or less cut and paste because people don’t consider the toilet as being a technology-driven area. It’s just a ceramic bowl. So, we still have that challenge.