Transforming manufacturing resilience could add £26bn of productivity to the economy according to new research from global electronics supplier RS Components.

Based on six different datasets spanning 20 years of data relating to investment, productivity, and employment. the newly launched Resilience Index tracks the resilience of some of the UK’s most prominent industries and shows that while many key areas of UK manufacturing are showing vital signs in key measures of business resilience, others are more fragile.

In terms of specific industry areas, food production, metals and the textiles sectors are not only below the manufacturing average but below the UK average too. While they were making small gains in the early 2000s, after the financial crash of 2008 these reversed and have never recovered.

The chemicals industry is among the most resilient of the manufacturing categories. After suffering a dip, post-financial crisis levels have continued to improve at a speed greater than the manufacturing average – and in line with their consistently higher than average rates of investment.

The oil and gas manufacturing industry also shows high levels of resilience, although this fluctuates wildly depending on the volatile price of oil and level of production. However, even when oil prices and production have been at their most extreme, resilience has still been at least 42 per cent higher than the rest of the manufacturing sector.

The engineering and vehicles industry has remained fairly resilient. At the financial crash, its level of resilience faltered much less than the rest of the sector and UK economy. Not long after it rose again, supported by continued investment.

Commenting on the findings Emma Botfield, UK & Ireland Managing Director, RS Components, said: “In the face of multiple economic, social and political challenges, this study shows what many senior engineers have known and feared for many years – UK manufacturing has to build greater resilience to improve performance.” 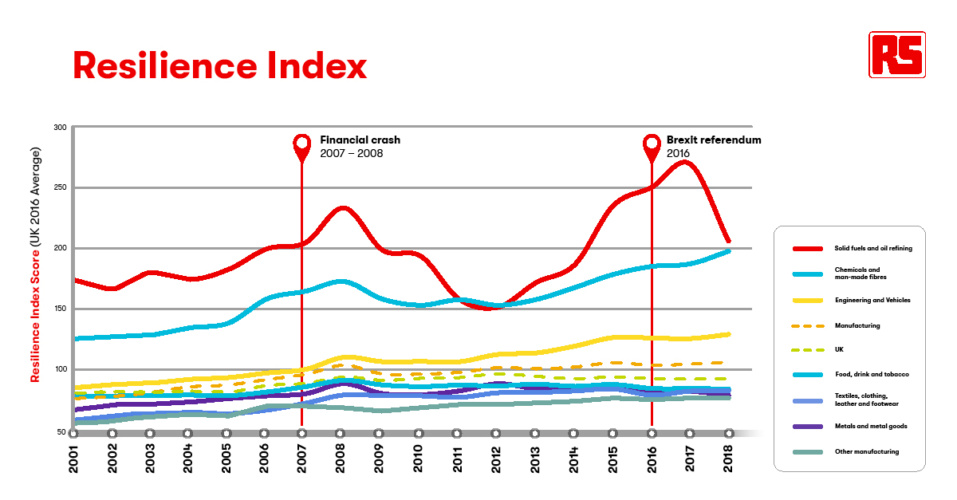 While financial services, utilities and manufacturing have levels of resilience above the UK average, construction and services industries have lagged behind the national average consistently since 2001.

Botfield added that the events of recent years – specifically the pandemic and Brexit – have put business resilience under the spotlight as never before.  “The idea of resilience within a business isn’t just having cash in the bank to weather the storm, it’s investing in the latest processes, equipment, products and ways of working as well as having protected, highly trained, well equipped and motivated people,” she said.  “Building resilience into organisations is likely to be a legacy of the COVID-19 pandemic and, for the UK, Brexit cross-border trade, and will see companies sink or swim in this sea change of business operations.”

The Index examined three broad areas: plant (business investment), process (productivity) and people.  Reports exploring each of the areas separately will be released over the next few months.