On August 4, 2020 the Lebanese capital of Beirut was rocked by an explosion that could be felt around 150 miles away on the island of Crete. 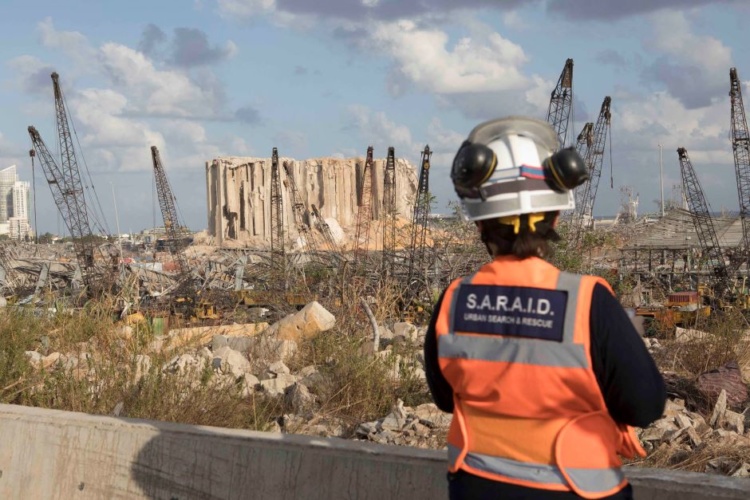 The blast, which took place in the city’s port area, was caused by the explosion of nearly 3000 tonnes of ammonium nitrate which had been stored in the vicinity for several years.

According to OCHA, the UN’s humanitarian affairs office, nearly 180 people were killed and over 6,000 injured in the blast, which destroyed most of Beirut’s port and surrounding neighbourhoods, rendering thousands homeless. The explosion damaged six hospitals, 20 health clinics and 120 schools.

Engineering a response to Nepalese earthquakes

The international response was swift with numerous organisations including the International Red Cross and Red Crescent Movement mobilising rapidly to provide assistance to the citizens of Beirut. Among them were members of SARAID (Search and Rescue Assistance In Disasters), a volunteer force that heeded the call of Lebanese local authorities and sent two teams to the stricken city.

After arriving in Beirut on August 6, SARAID set to work with local engineering teams and international Urban Search And Rescue (USAR) teams to assess the impact of the damage and help local engineers make the decision as to whether buildings are safe for occupation or not. They were backed up by a remote team of experts working from  the UK.

As a structural engineer, what training do you undertake before being assigned a SARAID mission?

FK: To join SARAID, no matter the specialisation, one needs to pass a demanding selection weekend, which is then followed by a monthly weekend of training for two years to become deployable as a USAR Technician. Being a specialist structural engineer, one can become deployable as a USAR Engineer more expediently. The bottom line is to become Base of Operations (BoO) deployable, which means that you’re well prepared to operate within the BoO when deployed in-country. We also undertake specialist USAR engineering training where we learn about seismics, damage patterns caused by different types of disasters to a range of construction typologies, and the functions of an engineer within a USAR team. While the training is very demanding, it is essential to achieve effectivity when deployed to a heavily burdened situation of a disaster affected country.

SC: The scenarios we could come across on a deployment are varied and very different to what most of us are used to in our day job. In training we are led by the team’s experienced search and rescue engineers who help us to apply our engineering knowledge to these challenging situations.

How does the remote technical support team help you when you are deployed?

FK: During the Beirut deployment the engineers, which remained in the UK, set up an Engineering Support Team. This was key to our deployment, as they were developing our strategy in Beirut and were advising us continuously on how to implement it on the ground. They basically took off a lot of pressure from us to allow us to keep safe and be very goal oriented to achieve results in a difficult situation with a very short amount of time. In addition to this, the rest of the SARAID team that remained in the UK were tirelessly supporting us to also take off as much burden as they can, and allow us to focus on the work. Without the support of the SARAID team in the UK, we wouldn’t have been close to achieving the results we aimed for.

SC: Towards the end of the deployment we compiled a proposal document to aid the handover of the damage assessment coordination to the Lebanese authorities. It included a summary of our advice to date which has helped the local engineers to continue the fantastic work they had started. The team back home were instrumental in putting this together.

What were your initial thoughts after conducting reconnaissance surveys?

FK: Our reconnaissance surveys were not conducted in the immediate vicinity of the explosion as that was an area under special restrictions, everything in there was pretty much levelled with the ground. The areas where we undertook assessments had a good proportion of buildings that were structurally safe. However, there was a big amount of them that were uninhabitable due to non-structural damage, such as glass facade, partition and utility services damage. Most structural damage was observed in the old buildings, which they class as heritage, making their reconstruction process even more complex.

SC: The first few streets of buildings immediately adjacent to the port have been severely damaged and will require detailed assessments to understand if they can be habitable again. For now, they remain unsafe for occupancy.

SARAID has lots of experience dealing with the after-effects of earthquakes.  From a structural point of view, does blast damage from an explosion make any difference to the way you look at a building when assessing it for future habitation?

FK: In my personal point of view, assessing for future habitation concerns the hazards present at the location of the building more than the original cause. Once you make a conclusion on the structural health of the building, you need to start thinking in terms of the future risks. For instance, is it an earthquake prone area, where you may expect seismic activity? If so, would the building be safe when an earthquake strikes?

SC: Whilst the forces of a blast do act differently than those from an earthquake the sort of detailing found in building’s designed for seismic loads will help those structures resist forces from a blast. Designing for ductility, multiple cycles of load reversal and specifying continuity in the connections is well suited to the extreme loading of a blast. Both events will impart large lateral forces onto a building. In addition to this, as a blast engulfs a building it pushes the floor slabs upwards, the opposite direction than they would have been designed for. Damage from this is key to look out for.

How long do you think it be before the blast-affected area of Beirut can return to normal?

FK: I don’t think this is an engineering question, as such. This is more of a political, religious and cultural question within the context of Beirut and Lebanon. Unfortunately, all of these factors create a very complex environment that will probably slow the reconstruction down. However, the high spirits and determination of the Lebanese people that I observed, makes me feel very positive that they will be able to get back on their feet again very soon.

SC: It is impossible for us to form an opinion on this. When we were there we worked with highly skilled local engineers and came across a community that was resilient. I hope they can work together to get back to some form of normality. My thoughts go to all of those affected by the blast, the road to recovery is never quick nor easy but I hope we played our part to help Beirut on its way.

Suzie Cooper reveals more about SARAID’s involvement in Beirut in the September 2020 edition of The Engineer.

SARAID is staffed entirely by volunteers and is funded solely by public donations. A Just Giving page has been set up to fund SARAID’s return to Beirut. Readers wishing to donate can do so here.