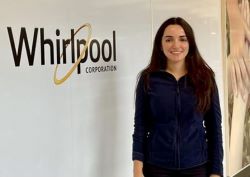 Tania Kyriakogkona, a Project Engineer at Whirlpool’s tumble dryer manufacturing centre in Yate, Bristol, talks about her journey to becoming an engineer.

As a child, I was always interested in how electrical devices work, the TV, radio, phone – anything in eyeshot! This curiosity followed through to my education, where I developed a love of science and engineering, and which culminated in my studying Electrical and Electronic Engineering BEng (Hons) at the University of South Wales.

What was your first role in engineering?

Have you had many female role models in engineering?

I am the first from my family to study engineering, so I did not have any direct exposure to engineers growing up. However, both my parents worked for BP in Greece and although they weren’t engineers, they encouraged me to pursue it.

During my university years I was one of only two female students in my course. I definitely felt some self-doubt at times, but the support from my lecturers and friends helped me overcome it. Similarly, since starting my career, I have found many male allies and I’m hugely grateful for the support they’ve shown.

What are the perceptions of engineering careers?

Unfortunately, the main perception is that Engineers are all men, or that engineering is ‘unfeminine’. I want to break these stereotypes. There have been instances when people have not believed that I was an engineer. It is a male dominated industry; to change that, more needs to happen in schools to inspire future female engineers.

My advice to anyone who is starting in their career, or who might be looking to change their career, is to not discount engineering based on perceptions. Reach out to companies, do some research and be curious and open to engineering as an option!

Has Whirlpool been supportive in your career?

Whirlpool has the Women’s Network and a Young Professionals Network – which are groups set up for likeminded employees to meet and share ideas and support each other. The Women’s Network meets on a regular basis. During our catch-ups we voice our concerns and issues that we play back to the business. It’s encouraging to see items from these meetings taken forward and actioned.

What challenges do you face in the sector?

I think the situation is improving for female engineers with a growing number of females in the industry. But for that to continue, I think more can be done in schools to promote STEM subjects and encourage more young women to consider careers in engineering.

Have you experienced any challenges to career progression?

I can’t say with any certainty that my gender hasn’t affected my career progression, however I can definitely say that a more inclusive environment like the one I found at Whirlpool helps people reach their potential.

What can be done to encourage more women into engineering?