The findings of The Engineer’s first annual business confidence survey reveal an industry that is both concerned and unexpectedly bullish about the prospects for the next twelve months. Jon Excell reports

If the UK economy’s anxiety levels were already high at the beginning of 2020, then the events of the last 12 months have surely driven them into the stratosphere.

The emergence of a number of apparently effective vaccines has provided a realistic hope that we will at some point in 2021 start talking about the pandemic in the past tense; but the lingering consequences of its staggering economic impact will – as the Chancellor Rishi Sunak warned in his December spending review – be with us all for many years to come.

Faced with this stark economic backdrop, not to mention continuing uncertainty (at the time of writing) over the UK’s future trading relationship with the EU, key sectors of the UK economy can rarely have contemplated such a challenging and uncertain future. And this is particularly true of  its  engineering and manufacturing sectors.

This November, in order to find out how industry’s top engineers are feeling about the challenges they face, The Engineer conducted its first annual business confidence survey. We asked our readers – drawn from the highest levels of the sector –  to tell us how they are feeling about the year ahead, what technology areas and sectors they expect to dominate, and how they expect their own organisations to perform. The key findings are highlighted here. 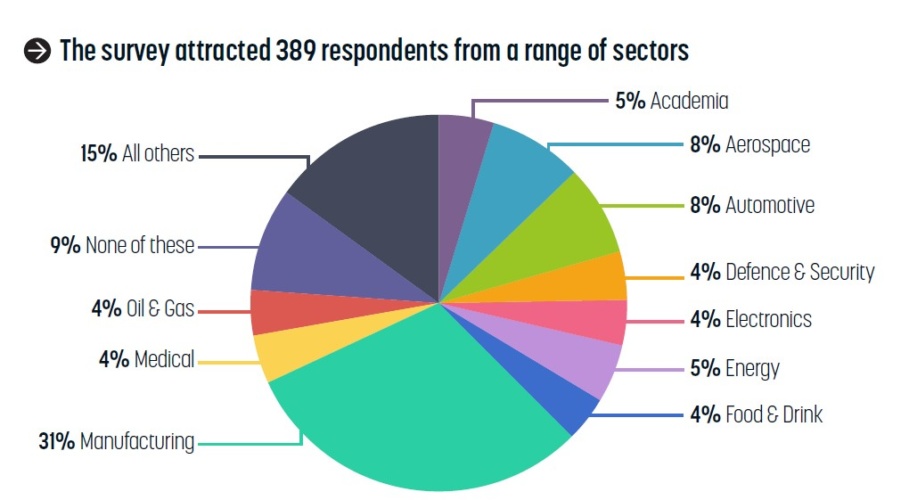 The survey was completed by 389 respondents from a range of different sectors. The largest single response group (121 respondents) was from manufacturing, with the next largest sample groups from the automotive and aerospace sectors, which accounted for 7.7 per cent and eight per cent respectively.  90 per cent of the overall sample group were at senior engineer level or above, with 12.9 per cent at CEO or MD level.

In a gratifying and somewhat surprising sign that UK engineering firms are in a bullish mood, just over 50 per cent of respondents said they were confident about the prospects for their businesses over the next 12 months. Meanwhile 31.6 per cent said that they were uncertain about 2021 will bring, whilst just 16 per cent of respondents report feeling actively concerned about next year’s prospects

Unsurprisingly, these confidence levels varied from sector to sector. Engineers working in areas that have been relatively unaffected by the pandemic – such as telecomms, defence, and consumer goods – were generally positive about what the future holds. The same goes for those working in sectors viewed as key to the UK’s economic recovery, such as renewables and healthcare.

Confidence levels were lowest in those sectors that have been hardest hit by the pandemic, with engineers in the aerospace and automotive sectors feeling particularly gloomy about the future.

Asked to identify the drivers for views on the year ahead, respondents offered a range of views.  Those at the positive end of the spectrum cited strong order books, diversified product portfolios, and a continued demand for product as reasons to be cheerful. For those viewing the months ahead with more trepidation the lingering effects of COVID-19, coupled with fears over the impact of Brexit, were the dominant areas of concern.

Asked to rank a number of key industry trends in order of importance over the coming months, respondents identified digitalisation and automation as main areas to watch in 2021.

The perceived importance of these fields isn’t new. Indeed, both have been priority areas for a number of years and are viewed as key to improving the UK industry’s productivity. However, as The Engineer has reported throughout 2020, and as a number of articles in this supplement attest, there is little doubt that the challenges posed by the pandemic have highlighted the capabilities of products in these technology areas and helped accelerate their adoption. Indeed, 54 per cent of our respondents told us that they believe COVID-19 has acted as a spur for innovation within their business.

Another trend expected to define industry activity in 2021 is energy efficiency and net zero engineering.  Whether it is developing the technology to decarbonise mobility and power generation, or implementing the processes and systems that enable our factories to run more efficiently, engineering will be at forefront of delivering on the UK’s 2050 net zero ambitions and it was no surprise to see this issue resonating with respondents.

Of the remaining options offered to respondents servitisation (which describes a shift towards more service oriented business models) and reshoring (the process of relocating manufacturing operations to the UK) were placed in fourth and fifth place respectively. 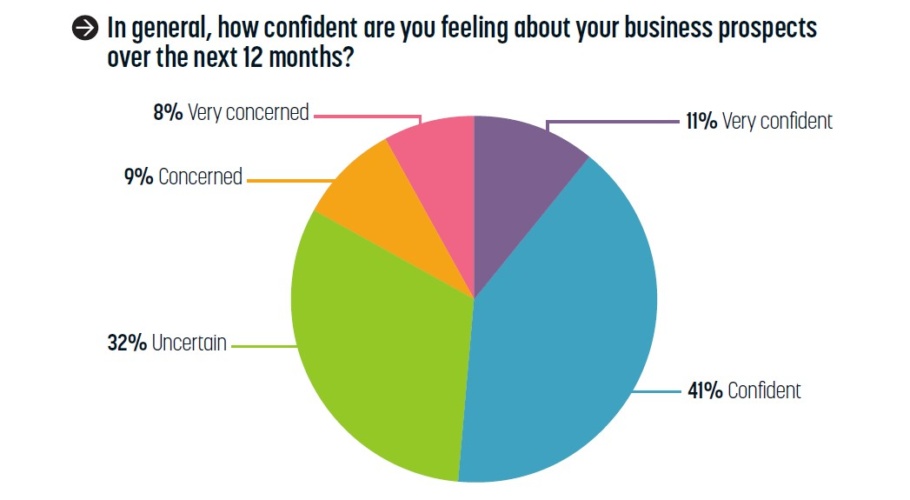 Investing in the future

As the UK economy attempts to drag itself out of recession, investment in the future will be key, and we asked respondents whether, within their own organisations, they expected to see increased investment in research and development (R&D) and new product development (NPD).

In both areas our findings paint a mixed picture with just under one third of respondents expecting either an increase or a reduction in investment. The largest sample group expected to see no change on 2020 levels (38 per cent for NPD and 42 per cent for R&D).

As with other questions, there were some significant variations from sector to sector, with respondents from sectors displaying the highest confidence levels anticipating the greatest levels of investment. A reasonably high proportion of respondents from the consumer, electronics, food and drink, marine, nuclear, renewables and rail sectors expect to increased high levels of investment in NPD, whilst respondents from the renewables, electronics, marine, nuclear , food and drink and consumer goods sectors all expect to see an increase in R&D investment in 2021.

Worryingly, the most pronounced declines in investment are expected in the automotive and aerospace sectors whose relative health supports much of the industrial activity in other sectors. Indeed, 33 per cent of respondents from the automotive sector, and 40 per cent of respondents from aerospace expect to see a reduction in R&D investment over the course of next year.

Addressing the challenges of the future  increasingly requires high levels of collaboration – often between sectors and disciplines that have in the past operated in isolation – and this year’s survey appears to back this up with almost half of our respondents (48 per cent) telling us that they expect to see high levels of collaboration with other organisations over the course of the next 12 months. Indeed, only eight per cent of those surveyed said that they didn’t expect to see any collaboration at all.

Asked to shed some light on why collaboration is becoming increasingly important, respondents highlighted a range of factors including the requirement to tap into new skills; changes in the  technological landscape – particularly with regard to net zero – requiring a more joined-up cross-sectoral approach; and the fact that  – at a time of scarce resources and limited budgets – working with partner organisations is often the only way of getting the job done.

Based on submitted written responses, engineers appear to be divided on the impact of the pandemic on the collaborative climate. Some respondents said that the social distancing requirements imposed by the virus made collaboration difficult, whilst others suggested that the mass adoption of remote conferencing tools triggered by the crisis has helped make collaboration easier. 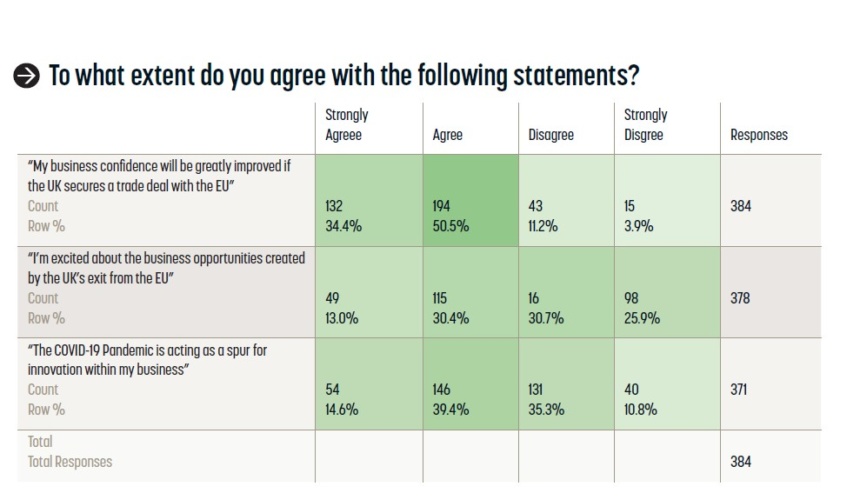 Deal or no deal?

At the time of writing trade discussions between the EU and the UK were ongoing (and expected to last well into December) but the outcome of these discussions is likely to have a major impact on industry’s health as well as the confidence of respondents.

Asked to rank the key business challenges presented by the UK’s exit from the EU in order of importance, respondents identified supply chain disruption, followed by the impact of tariffs as the key challenges that they will face.

These were followed by concerns over reduced access to key markets, fears that there would be reduced levels of involvement in collaborative projects and worries about access to skills.

Whilst there are clearly many areas of concern, it appears that many of these concerns will be alleviated to some degree if the UK secures a trade deal with the EU, with 85 per cent of respondents agreeing that a trade deal would greatly improve their business confidence.

However, whilst some respondents claim to be actively excited about the opportunities presented by Brexit, the majority (56 per cent) were unconvinced that leaving the EU – with or without a deal – will be good for business.

Guest blog: Getting to grips with complex systems