Industry’s challenges in recruiting skilled workers, coupled with an anticipated shortfall in the number of low skilled workers entering Britain, has led to a renewed focus on the importance of automation technology. 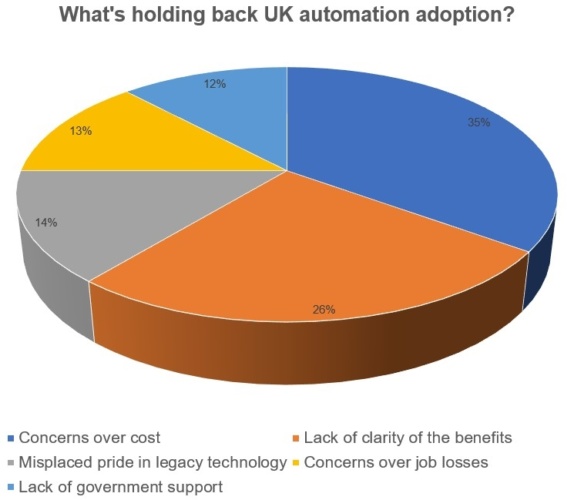 One estimate values robotics and automation at over £180bn to the UK economy, but the adoption of these technologies falls way behind economies beyond our shores. As mentioned last week, the UK’s robot density – a measure of the number of robots per 10 thousand workers – is 91, compared to 338 for Germany.

So, what is holding back the adoption of automation in the UK?

Over a third of poll respondents (35 per cent) believe cost is the main issue, followed by 26 per cent who agree there is a lack of clarity as to the benefits of automation technology. For 14 per cent of poll respondents, a misplaced pride in legacy technology is stymying automation, and 13 per cent believe it is due to concerns over job losses. The remaining 12 per cent see lack of government support as the over-riding factor.

In the comments that followed, Nick Cole said: “One issue I have not seen is that relating to the cost of installation. Is it worthwhile for SMEs in particular to use this equipment, which needs skilled maintenance and programming even to carry out mundane tasks? If there is a massive production run, then the economics are clear but for small scale tasks much less so. Sometimes it is easier and quicker to retain the human touch, especially for bespoke or one-off jobs.”

“Robots are used to maximise profits, enable the use of cheap semiskilled and unskilled labour, and compete with foreign companies,” said Phil. “Given that we can never compete on price because of much cheaper labour and much less regulation overseas, is it maybe time to stop competing, go right to the top of the market and produce the very top quality items at a premium price, because they are made in Britain by hand? you know, like we used to? By the way, skilled labour is not “available” YOU HAVE TO TRAIN THEM!! Remember the in-house training schools? Just a thought, I’ll get me coat.

For one commentator, the road to automation is evolutionary rather than revolutionary.

“In my experience, people have lots of different perceptions as to what might be involved in automation but don’t actually know,” said Maria Sarkar. “It’s also a big topic and so the solutions and benefits are likely to be different for each firm. My advice is, start small…. and add to it. Automation should be a journey of continuous improvement.”

What do you think? Keep the debate alive below the line, but remember to abide by our Guidelines for Comments.