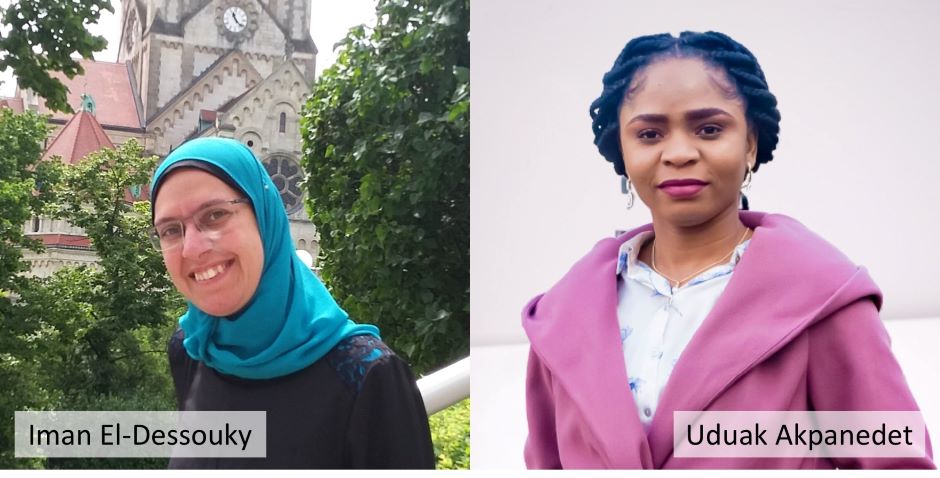 “At WIE UKI we are lucky to have a wonderful team of volunteers who are passionate about challenging stereotypes, and about working towards our goal of facilitating the recruitment and retention of women in technical disciplines across the UK and Ireland,” said Annabel Latham, WIE UKI Chair.

“In recognition of their consistent hard work in organising activities and outreach related to Women in Engineering, and to facilitate a more strategic approach, we are awarding WIE Ambassador badges to our network of valued volunteers,” said Nagham Saeed, WIE UKI Ambassador network lead.

The first two WIE Ambassadors have been named as Iman El-Dessouky and Uduak Akpanedet who will work together on organising an online WIE conference later this year.

“I worked as a telecom engineer for eight years, and this encouraged me to pursue my Master’s at Cairo University in 2010, on the subject of data mining techniques for telecommunication fraud detection,” said Iman El-Dessouky. “I love engineering and I am proud to be an engineer – so much so that I continued in the research field. Although many boys and men dream of working as an engineer, it is unfortunately the dream of very few girls! The statistics indicate that only 11 per cent of engineers in the UK are female. This made me take the responsibility to encourage girls and women to challenge themselves and join engineering field.”

“After my master’s degree at the University of Manchester, I went on to work with transmission and distribution companies in Nigeria where I accumulated several years of innovative experience in protection, project management and power systems, before moving back to the UK to join ITPEnergised,” added Uduak Akpanedet. “When I was growing up, engineering was described as a ‘male discipline’. This was not because girls and women did not have the ability to study engineering, lead or work in an industry, but simply because they were female. So, with my passion for making the world a better place to live through innovation and creativity, engineering for me was a pathway to solving real problems.”

She added: “As a female engineer, it really makes a difference seeing that girls can make it in the profession. These things in turn have stirred up a deep-seated ambition within me to promote engineering as a career to young girls and women.”