Ali Nicholl from Iotic outlines why we need digital twins, what they are and how we can all benefit from a new digital twin age.

There is a school of thought that there have to date been two technology platforms that truly leveraged the power of algorithms. The first was the World Wide Web, which enabled information to be shared and algorithms to be applied.

The second was social media. The rise of Facebook, Twitter, and others created digital versions of individuals, enabling the application of machine learning to understand and influence our interests, careers, relationships, and lives. 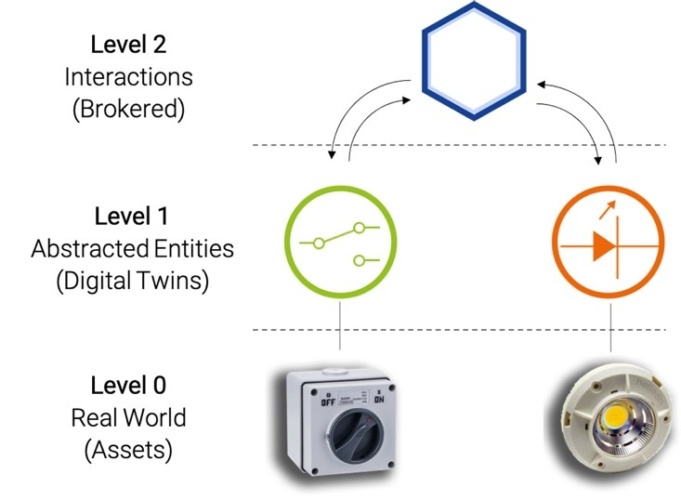 We have digitised and interrelated information and individuals, but what of a third platform? Kevin Kelly whose title is Senior Maverik at Wired Magazine described the third platform: “all things and places will be machine-­readable, subject to the power of algorithms. Also, like its predecessors, this new platform will unleash the prosperity of thousands more companies in its ecosystem, and a million new ideas—and problems—that weren’t possible before machines could read the world.”

However, the potential of a machine-readable world isn’t in its visualisation – the creation of a sophisticated 3D model, a ‘mirror world’. The power lies not in interfaces, but in interactions. The ability to enable David Rose’s ‘Enchanted Objects’, an age when, “connected objects talk to each other and work together on servers in the background, you will receive entirely new services. This [will be] possible because each object will have a ‘digital shadow’—a parallel world of atoms and bits.”

These ‘digital shadows’ or digital twins are set to transform enterprise.

Why do we need digital twins?

Per Erik Holsten, MD Oil, Gas & Chemicals at ABB, said that in order to capitalise on the potential offered by the next generation of digital innovation, “companies will need to embrace digitalisation on a bigger, much more holistic scale encompassing end-to-end processes throughout plants and across the supply chain – not just in isolated pockets of change”, and therein lies the rub.

Holistic approaches encompass vast fragmented, variable networks of interactions. In 2017 Harbor Research identified the need for robust smart systems completely re-configuring the relationships of people, machines, and information devices to business systems and society. Built upon across-the-board digital computing and automation, accomplished by enabling a whole new generation of tools for managing vast streams of meaningful data and intelligence. The goal is smart systems that are self-sensing, self-controlling, and self-optimising—automatically, without human intervention.

But, as organisations adopt new technologies, and increase the number of endpoints, the volume of data they collect swells hugely, and more importantly the interactions between them grow exponentially.

The ability to manage those complex interactions at a granular level, securely, across ecosystems of partners is beyond traditional approaches. Investment in multiple siloed point solution apps and platforms has complicated enterprise data estates, shackling innovation and limiting adoption, flexibility and adaptation. We need the machine-readability promised by the third platform; we need the autonomous interoperability and optimisation flagged by Harbor Research; and organisations need individuals who innovate at the crossroads between technology and business. Individuals with this vision include Tom Bucklar, the Director of IoT and Channel Solutions at Caterpillar, who said, “Our digital strategy is customer-centric. We started in the mid-90s connecting equipment, and we now have one of the largest installed bases of connected equipment, which gives us a lot of rich data to build customer solutions. When we start to talk about our digital strategy, we really look at digital as an enabler. We’re not trying to build a digital business. We’re trying to make our customers more profitable.”

One-time, use-based system integrations are costly and restrictive, while data warehousing simply creates bigger silos and fails to reflect the required co-operative, multi-party nature of service delivery. The solution is interoperable ecosystems based on digital twins.

What is a digital twin?

Let’s start with what it isn’t. The powerful digital shadows that drive smart systems and the next generation of supply chains aren’t 3D models, visualisations or siloed simulations. A digital twin is a comprehensive, interoperable version of any thing,

all its data, all its controls, through its whole life. A semantic version, structured and tagged using web technologies such as RDF and SPARQL, enabling them to be read directly by machines.

The inclusion of controls, as well as data, is integral to a true twin. It enables the creation of autonomous interoperability, the background activity that enriches customer-centric services. The power of digital twins comes not from what they can show us, but how they can securely and meaningfully interact with each other.

Pioneering organisations aren’t creating a single all-powerful digital twin, but are instead atomising their existing technology and processes, creating twins of sources and consumers at a granular level. Compositing new twins of an engine, a person, a ship, a construction site, or an entire nation; they develop not a single enterprise twin, but an enterprise of twins, each acting as a unified access point or gateway to multiple sources of data and information.

In 1982, the author Michael Jackson proposed a method of describing software systems based around the concept of abstracted entities, their actions, and their interactions. His prescient thinking predicted the digital twin as lightweight abstractions of any thing that can meaningfully and securely interact with a virtual version of any other thing. We call it ‘double abstraction’, the twinning of source and consumer to enable brokered interactions across business units, enterprises, supply chains and consortia. Forging this new path we have characterised four core flavours of digital twin:

How are digital twins being adopted and used?

We have seen the adoption of digital twins by organisations such as Rolls-Royce Power Systems who have placed an emergent twin-based interoperable ecosystem at the heart of its vision to deliver the next generation in customer service. Sean Gigremosa, Technical Product Manager explains, “the issue was that we didn’t see our products the way our customers do. We saw the world based on our technology and process, infrastructure and delivery methodology. RRPS harnessed digital twin technology, to provide a virtual composite of the entirety of an asset’s data and controls, one that could meaningfully interact with other twins, to provide a single source of truth that helps suppliers become service providers and customers to become partners.”

Elsewhere, in the built environment work is underway by early adopters like BAM Nuttall, in parallel with frameworks such as the Centre for Digital Built Britain’s Gemini principles, to generate new insights from existing tools, driving greater efficiencies and new revenue. This was summarised by Colin Evison, Head of Innovation at BAM Nuttall: “We have all this equipment on sites, but no information about it…we just didn’t collect or use it anywhere. Many of [the suppliers] offer us an app to monitor their bit of kit, but that’s not much use to us. The value of the Iotic approach is that it’s made it easy for the team to connect different applications and help them work together.”

The use cases are as varied as the twins themselves. The digital twin age is the next evolution of disruption provided by the web. What is the killer application or use case for the web and internet? There isn’t just one. It isn’t what the technology can do, what problem it solves, but what it enables us to create and co-create. Liberating us from siloed thinking and approaches and enabling us to focus on what matters to our company, customers, and communities.

Poll results: Should proposed Cumbria coal mine go ahead?

New photonic tools will delve deeper into the brain