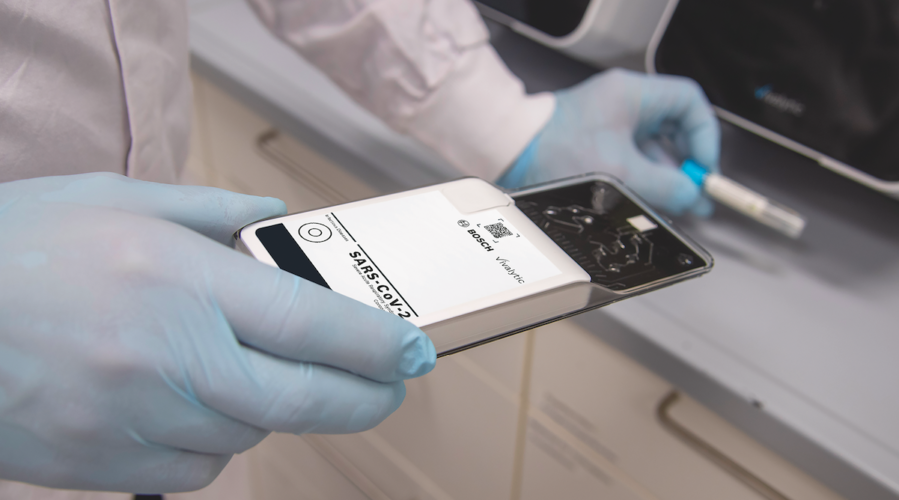 Developed in collaboration with German biotechnology company R-Biopharm, the test – which has a claimed sensitivity of 98 per cent and a specificity of 100 per cent – is said to be the fastest polymerase chain reaction (PCR) test worldwide.

The test is designed for use with Bosch’s Vivalytic analysis device, an automated cartridge-based platform for molecular laboratory diagnostics that is designed to test various samples with a range of analytical methods.

As previously reported by The Engineer Bosch launched the first rapid test for its Vivalytic analysis device at the end of March, after just six weeks’ development. This earlier multiplex test simultaneously checks samples for the SARS-CoV-2 virus and nine other respiratory diseases in two-and-a-half hours.

According to a statement from the company, when using the new test it is currently possible to simultaneously evaluate five samples in one test cartridge, potentially enabling fully automated processing of more than 160 samples a day. Ongoing developments in software are expected to reduce testing time even further.

During use a sample is taken from the patient’s nose or throat using a swab and placed in the test cartridge. Then the test cartridge, which already contains all the reagents required for the test, is inserted into the Vivalytic device for automated analysis. The system is designed to be user-friendly with medical staff require only requiring brief training on how to operate it.

The development of the new test is part of a research and development project funded by the German Federal Ministry of Education and Research (BMBF). As the federal minister for education and research Anja Karliczek said, “The improved testing procedure developed by Bosch with the BMBF’s support has the potential to be a tremendous help with this complex job. The rapid improvement of our technological capabilities shows what innovative achievements German companies can deliver in times of crisis.”

The test is now available in the UK and Europe and Bosch hopes to reach capacity for one million tests by the end of the year.

Tech skills are the secret weapon for UK businesses