Since its inception, C2I has attracted many entries from exceptional collaborations that haven’t quite fit neatly into our traditional award categories. In light of this, The Engineer created a Wildcard prize, and our inaugural winner is a fine example of the type of multi-faceted collaboration that inspired the category’s birth.

Incorporating groundbreaking robotics, haptics and telepresence technology, the Tactile Telerobot is a collaboration between Shadow Robot Company (UK), HaptX, SynTouch, and Tangible Research (all US), funded and facilitated by ANA Holdings, the parent company of Japan’s All Nippon Airways (ANA). The result is the world’s first haptic telerobot hand, capable of mimicking movements and transmitting touch from the other side of the planet, and potentially one day even between planets.

At the heart of Tactile Telerobot is Shadow Robot Company’s Dextrous Hand, a pre-existing robotic platform claimed to be the most advanced human-like hand on the market. This is paired with biomimetic tactile sensors from SynTouch, which can detect everything the human finger can feel, including force, vibration and temperature. The last piece of the puzzle is HaptX’s haptic feedback gloves, which not only allow the wearer to control the Telerobot, but also relay the sensation of touch back to the user, whether in the same room or on a different continent.

It’s a major leap forward for telerobots, which up until now have largely been limited to two-fingered grippers. Tactile Telerobot’s five-fingered dexterity opens up a wide range of potential applications, with safety-critical operations in dangerous environments at the forefront. 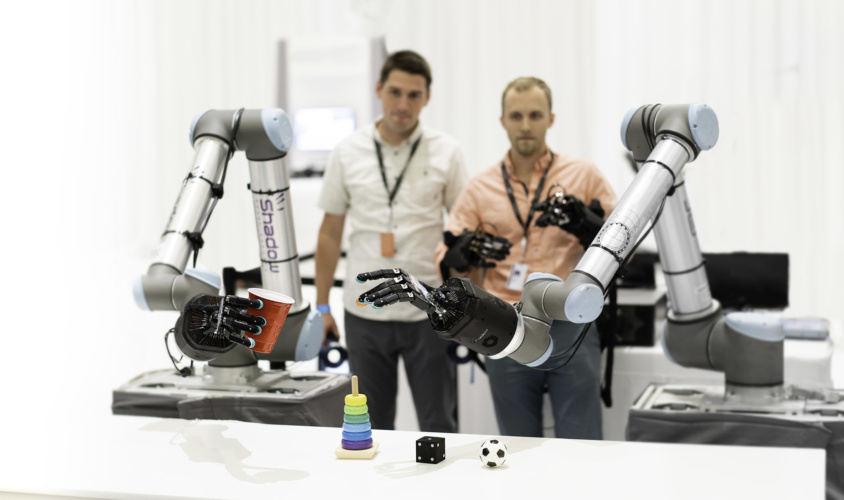 “Bomb disposal is a great example of a complex problem, carried out by highly skilled people, with high risks involved,” Rich Walker, managing director at Shadow Robot, told The Engineer. “It’s much like the other applications we’re interested in such as nuclear decommissioning – handling radioactive waste that can lead to death if exposed to human skin – and pharma labs, safeguarding lab workers dealing with harmful chemicals and taking the risk away of human contamination.

“The dexterity is definitely there for these intricate and sensitive tasks which is why it’s one of our USPs. We have two decades worth of experience in creating robot hands with unprecedented dexterity and what makes Shadow’s Dexterous Hand fit for these tasks is that it’s the only robot hand on the market to have 24 movements and 20 degrees of freedom for increased flexibility. Each finger moves side to side independently – which is actually superior to what we can instinctively do with our own human hands – and there’s a total of 129 sensors to increase accuracy and enable high-level precision.”

Having project partners based in the UK, US and Japan brought obvious challenges to the collaboration, from coordinating video calls to the various cultural differences across three continents. From the outset, the overarching goal was to create something that had never been done before. However, each partner had its own ideas and plans for the technology. HaptX is exploring using the platform for professional high-end sales and services training, while Shadow Robot sees the opportunity in remote operation and maintenance, particularly in dangerous environments. ANA Holdings’ Avatar Division had originally instigated the project with a view to teleoperation for space-station maintenance, and perhaps even control of a robot on Mars one day.

“Currently, the Mars project with ANA and JAXA (Japan Aerospace Exploration Agency) is in the long slow development process of government projects,” said Walker. “However, our dealings with the space industry goes back a long way – two of our earliest clients were NASA and ESA – and continues today.

“In 2019, we collaborated with FAIR-SPACE Hub at the University of Surrey which delivers research in robotics for orbital and planetary environments. Using our robot hand technology and an algorithm for Autonomous Visual Grasping developed by FAIR-SPACE Hub, we were able to showcase a demo on how an autonomous orbital robot could grasp the engine nozzle of an orbital target. The whole process is extremely fast, taking just under 0.2 seconds. Potential applications include in-orbit servicing of satellites and active debris removal.” 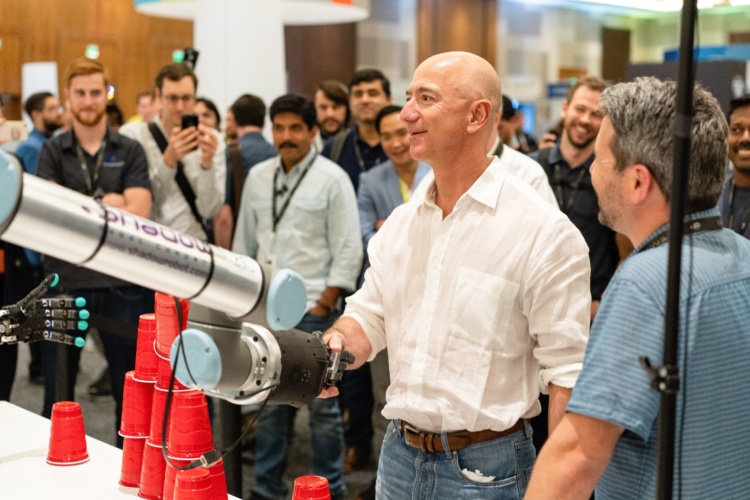 Back on Earth, the Tactile Telerobot has been making waves in the media and amongst the technology community since it started being demoed in public. In June 2019, Amazon founder and CEO Jeff Bezos was visibly impressed with the platform when he trialled the Telerobot at his company’s re:MARS conference in Las Vegas. In a Channel 4 programme about future technologies, UK comedian Jon Richardson used the Tactile Telerobot to interact over 5G with his wife in London while he was in California. While COVID has put a halt to live demos, the nature of the tech means that the various international partners can still access the platform.

“We’re fortunate that the Tactile Telerobot was ready before news of COVID-19 came about,” said Walker.

“We obviously have and continue to abide by the guidelines throughout the process which means we’re not doing live events to demo the technology. However, the fact that our Tactile Telerobot can be controlled remotely cross country remains an advantage as it meant that our partners in the US can use the part of the system that they own, i.e., the haptic gloves, to control Shadow’s robot hands at our UK headquarters while maintaining social distance – that’s the awesomeness of teleoperation!”

The pandemic has also presented the team with a potential new market opportunity, with a fresh focus not only on remote working and operations but also on safeguarding people working on the frontlines of healthcare in hospitals and laboratories.

“If we look at what we as a global nation are going through right now, it’s become evident that our tech is most needed within pharma labs and remote maintenance via teleoperation,” Walker continued.

“COVID-19 has shown us just how important health technology solutions can be to safeguard public health agencies and frontline health workers. The types of tasks that can be automated include ensuring that the correct amount of medication is precisely packed into the appropriate containers; manufacturing tasks such as labelling, capping, collating, packing; and shipping and collating medicines to allow faster, around-the-clock processing time for quick delivery.

“With teleoperation, critical workers can perform intricate lab tasks at a safe and comfortable distance – without physically having to be in a lab, and without the need for cumbersome PPE that is in short supply. This reduces the risks to workers as well as keeping labs sterile and reducing the risks of human errors and contamination.”

As the pandemic reshapes the fundamentals of how humans work and interact, teleoperation will surely only grow in the years to come. For this year’s C2I Wildcard winner, that may prove a golden opportunity to show off its Midas touch.