From the cancellation of exams to the widespread shift to remote learning, the pandemic has had a profound impact on the education of millions of young students.  And for the world of engineering, the hiatus of the past 12 months – in which many traditionally face-to face STEM activities have been forced to move online – has added to anxieties over the future pipeline of engineering talent.

The winners of this year’s young innovator award – who used the opportunity of lockdown to advance their engineering skills – provide reassuring evidence that despite the challenges posed by the pandemic, tomorrow’s engineers are still pursuing their dreams.

The first of our successful finalists is former Nottingham High School student and casual snooker player Jonathan Lim, who, when considering a project to pursue for his DT A-level, saw an opportunity to improve his favourite game.

Lim – who has since started an engineering degree course at the University of Southampton – developed and built an automated scoring system that recognises the colours of balls potted, calculates the effect this would have on the current scores, and then displays the score on a digital display.

Armed with a basic knowledge of the Arduino electronic prototyping platform, limited coding skills in C/C++, and a passion for wood-work, Lim designed and developed a prototype scoring device and integrated it within a ¾ size snooker table that he also designed and built from scratch.

Explaining how the system works, he said that during use, a ball falls into a semi spherical hole in rotating cradle situated beneath the pocket cradle, blocking out all light to a colour sensor housed within the cradle. This triggers a microswitch which turns the colour sensor on, allowing the Arduino platform to gather data from the 4 sets of photodiodes on the TCS34725.

The data from the colour sensor arrives as 4 packets (red, green, blue and clear) via an I2C interface. There are 6 colour sensors on the table, all sending data to a I2C multiplexer that is controlled by the Arduino. The colour sensor to read data from is decided on the microswitch that the ball triggers when it falls into a pocket.

During this time the cradle – which is supported on two ball bearings that rotate just off the centre of mass of the cradle – will have rotated, causing the ball to fall out of it, and on to the ball rails positioned below the cradle. The system then self-rights itself, ready for the next ball.
The cradle was designed on Fusion 360, and then printed on a Prusa i3 MK3S 3D printer. “This meant that I was able to use rapid prototyping to test my design, and also meant that I could use complex shapes, only manufacturable with injection moulding or other high cost manufacturing methods,” said Lim.

Data gathered by the sensors is converted from its raw 16-bit binary number, to a more manageable decimal type. Then, the four vales (RGB&Clear) are cross referenced to a known range of values for each of the colour balls – this process determines the colour of the ball that has been potted.

Once the colour of the ball is determined the score in calculated and the scores are then sent via a Bluetooth connection to the scoreboard which houses another Arduino and a set of 6, 7 segment displays.

Lim said that working on this project helped to solidify his desire to innovate and develop cutting edge processes and both mechanical and electronic devices.

Our next young innovator winner was spurred into action by the media images highlighting the discomfort endured by healthcare workers on the frontline of the fight against COVID-19.
Equipped with a rudimentary knowledge of 3D printing and CAD software Toby Weymouth – an A-level Design & Technology student at King’s School, Worcester – set about designing and prototyping a fan based cooling unit that could potentially be used to reduce this discomfort by ducting air behind a PPE visor onto the wearer’s face.

The resulting design uses a 3D-printed housing to contain a small, light, quiet fan, which clips onto any visor and is powered by a USB phone battery pack, connected using a 1.5m cable. The battery pack can be kept in the user’s pocket, which removes the weight of the battery on the head.

Weymouth said that a typical small battery pack will run the fan for half a day, whilst a larger pack is capable of running the fan for an entire working day. The USB battery packs can therefore be instantly swapped and are recharged using phone chargers, laptops, or increasingly USB plugs.

With the design in place, his thoughts turned to manufacture. “As an individual student, I realised I wouldn’t be able to produce vast quantities by myself and therefore designed the product to be made easily by individuals/companies across the UK,” he said. “To do this I created a website including detailed instructions, agreed discounts on required parts and all 3D printer files needed.

Before embarking on his current project Weymouth was a member of EDGE4x4, a King’s School team which twice won the UK heats of the Land Rover 4×4 In Schools Technology Challenge and which was shortlisted for the 2019 Collaborate To Innovate Awards. He explained that he drew on the contacts and lessons learned during this competition, to secure support for his latest initiative. 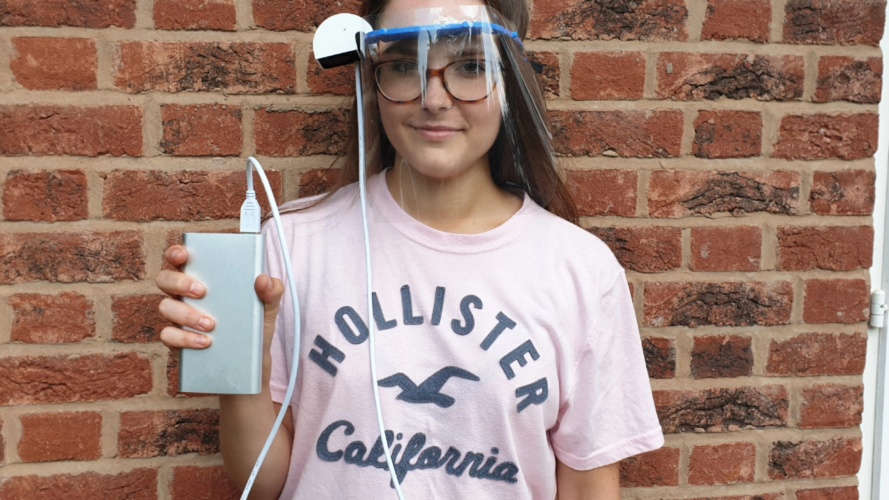 One of the first organisations to help him out was electrical wholesale company, CPC, which supplied all the electrical parts – 40x40mm fans and USB cables.

Meanwhile, on the 3D printing side, Bromsgrove based 3D scanning specialist firm Central Scanning, kindly printed his prototype fan housings allowing him to work on optimising the airflow, whilst US firm Makerbot, donated a 3D printer so that Weymouth he could produce the fan housings himself. RS Components supplied the ABS 3D printing filament for the fan housing and offered support to share the project to a wide audience.

Whilst the C2I judging panel questioned the wisdom of using fans to blow potentially contaminated air on to health-workers’ faces – they were nevertheless impressed by the way in which Weymouth went about his project: refining a design, establishing a supply chain, and identifying a potential route to manufacture.

Meanwhile, Weymouth said that the experience has fuelled his ambition to pursue a career in engineering. “The knowledge gained from prototyping a real-world product from start to end, in addition to agreeing to partnerships, writing instructions and building a website has proven several valuable learning experiences,” he said.