In the same edition of The Engineer as a report of the sinking of the German naval cruisers Scharnhorst and Gneisenau in the battle of the Falkland Islands, there is a page showing photographs of a most unearthly looking outfit. 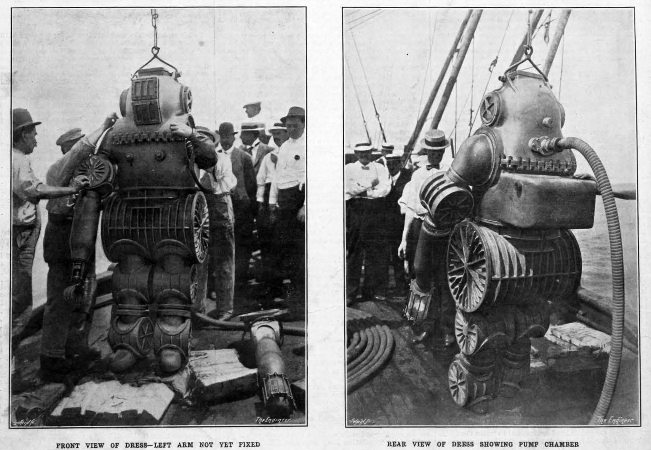 Resembling something from the mind of a slightly unhinged illustrator of the golden age of science fiction, it could be one of those endearingly blobby robots that threatened square-jawed heroes in 1950s B-movies. But, in fact, it’s an early incarnation of an armoured suit to allow divers to work at great depths on salvage projects without having to undergo lengthy decompression and protecting them  from the crushing pressure of deep water.

Designed by US inventor Chester E McDuffee, the suit was made from what is described as “an aluminium alloy of great strength, the composition being a trade secret”. It weighed a total of 480lb when empty, but because of its displacement was extremely buoyant, and required an additional 115lb of lead in order to make it sink. Characterised by very large barrel-shaped hinges at the waist, knees, ankles and elbows, the suit looked extremely cumbersome but, according to The Engineer, allowed the user a great deal of movement while underwater. “The operators have declared that they were not hampered in walking freely on the bottom or in bending or moving their arms,” the article said.

Prior to this, deep-sea diving had been done using flexible suits with a rigid helmet. However, the practical depth limit for such equipment was about 90ft and, because the air supply had to be provided at pressure, divers had to undergo decompression stops as they surfaced that could be longer than the time they spent at the bottom; this greatly increased the cost of deep-sea operations and led to the five-year research effort to develop the McDuffee suit.

The article related a test of the suit involving an experienced diver who had previously used flexible suits. He had since left the navy and, as is common with ex-servicemen, had put on some weight. The article said he weighed 214lb “and was what might properly be called stout”. Despite this, he descended to 212ft in less than a minute, remained at that depth for 20 minutes and then was brought up “on the run” in less time than the trip down. He was taken out of the armour as soon as he was back on deck.

“He was in his normal condition and regretful only that it was necessary to bring him up so soon” so that another diver could have a chance to test the equipment, the article recorded.

The speed of ascent and immediate recovery was thanks to the rigid nature of the suit, which could withstand the pressure of water at the sea bottom without any need for high-pressure air, as would be necessary for a flexible suit. This meant that the diver could breathe air inside the suit at surface pressure, therefore eliminating the need for decompression during surfacing. Air was supplied via an armoured hose connecting the suit to the service ship at the surface, which also contained electrical cables: these powered the diver’s intercom system and a removable hand-lamp.

The second trial was not without problems. Just after the diver was encased in the armour, the compressor overheated and the supply hose had to be reconnected to a smaller unit. This took about an hour, during which time the diver was in the armour in full sunlight and had to be cooled down with a water hose. During this time, the leather packing for the joints began to dry out. Nobody noticed this, and once the new compressor was working, the diver was lowered into the water. When he reached a 100ft depth, the compressor failed and was out of action for nearly five minutes, with the poor diver dangling unsupported. He breathed the free air in his suit, and was not inconvenienced, the report said.

Once the compressor was reactivated he began descending again. Unfortunately, the joint packing had shrunk when it dried out, and once he reached 212ft, the suit started leaking. The water had reached his waist when he used the intercom to request to be brought back to the surface. By the time he came back to the top, all the excess water had drained out. The Engineer saw this as a positive: “It is easy to imagine what would happen to a diver in the elastic dress had the air pumps failed him at a depth of 100ft and his supply cut off for five minutes,” it said.

The right arm was equipped with a mechanical hand; the left being fitted with a lamp or a hook. The hand was dexterous enough for the diver to be able to pick up a thin sheet of paper from a flat surface. It was sufficient for the tasks that a diver would be expected to perform at depth. “In regular salvage work the diver encased in the McDuffee armour would not be expected to tie knots or do anything of a kindred character,” it said.

The week ahead: All at sea

On track, in orbit, and all at sea.