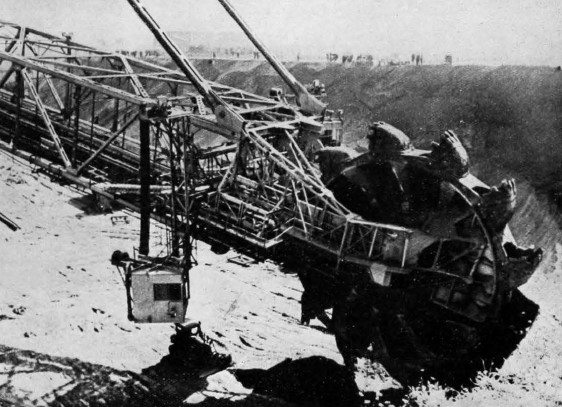 The Hebrew word behemoth comes from the Book of Job and over time it has been used to describe entities that are large and powerful, much like very large bucket wheel excavators.

The behemoth and BWE may be ‘unconquerable land-monsters’, but where one brought chaos in mythology, the other continues to bring fortitude to the considerable task it was designed for.

BWEs are items of heavy machinery most commonly used for surface mining and on January 6, 1955, The Engineer reported on the first of a group of five very large BWEs that came into service at the Fortuna opencast lignite mine west of Cologne in Germany.

Built by Orenstein-Koppel und Luebecker Maschinenbau Aktiengesellschaft, the BWE measured 200m long, stood 66m high, and had a capacity of 100,000 cubic metres per 19.5-hour day. At a weight of 5,600 tons, including 170 tons of material on the conveyor belts, the machine was the largest of its kind in existence.

The bucket wheel, with 12 3.6 cubic metre buckets, was driven at 2.3rpm by two geared, 3kV slipring motors rated at 525kW each. The Engineer noted that the entire machine comprised three main sections, namely the excavator itself, the conveyor bridge, and the wagon loading station.

Powered by DC motors, the machine could move at up to 600m per hour with each portion capable of turning in a 100m diameter circle. The jib could be raised to 50m above track level and lowered to 6m below it with ‘a twenty-four-purchase block operating the topping boom’. Two independent winches were provided to increase safety and enable the 59mm thick wire ropes to be changed without propping up the jib.

The superstructure was supported on the central portion by a 15m diameter stewing ring containing 156 ball bearings measuring 150mm diameter. A similar ring supported the central part on the chassis.

“In this way the counterbalanced superstructure can turn through a full circle, and the conveyor bridge, one end of which slides in the central portion, can be arranged independently of the tracks,” The Engineer noted. “The central excavator section also houses a coal crusher, which can be moved into position when required and serves to limit the coal size to 500mm.”

The Engineer added that from the bucket wheel, near the driving cabin, 2.6m wide band conveyors carried 2m3 per second of material to the loading station. There, the overburden was loaded into wagons with 180 tons capacity. Wagons of 93 tons capacity were supplied for coal. The two reversible loading conveyor bands were alternately supplied from a swinging intermediate conveyor. Each of the two rail tracks was supervised by one loader, who radio-controlled the 129-ton electric locomotives.

“Apart from a few maintenance men, the excavator requires three operators: the driver and the two loaders,” The Engineer said. “Rated at a total of 10,300kVA, the installation is supplied at 25kv by a 24-ton trailing cable 1,500m long. It is intended to equip the machine with programme control so that slewing cuts 10m high, 1.2m deep, and 89m wide can be taken automatically.

MORE FROM THE ENGINEER'S CLASSIC ARCHIVE

“Bucket wheel excavators are stated to have been chosen as being most suitable for the irregular coal seams of the district. The mine aims at an output of 25,000,000 tons of lignite per year (5.4 per cent of 1954 world lignite production) and will eventually reach a depth of 250m.”

The metrics that describe the 1956 BWE are certainly impressive, but they pale compared to what is currently the world’s largest BWE. That honour goes to Bagger 293, which was built by German company TAKRAF. Weighing in at 14,200 tonnes and capable of moving 240,000m3 of overburden every day, the Bagger is said to have recorded 380,000m3 of excavations per day. Operated by five people, the SRs 8000 class machine is 225m long and has a top speed of 10m per minute. In operation, its 18 buckets have a capacity of 15m3 made possible by the machines 21m diameter blades.