July 1960: An automatically fast lane to the future

The Engineer's report on early plans for autonomous vehicles

Many of today’s cars roll off the production line with a myriad of safety features that help keep motorists safe in those moments when concentration wanes and traffic is dense. 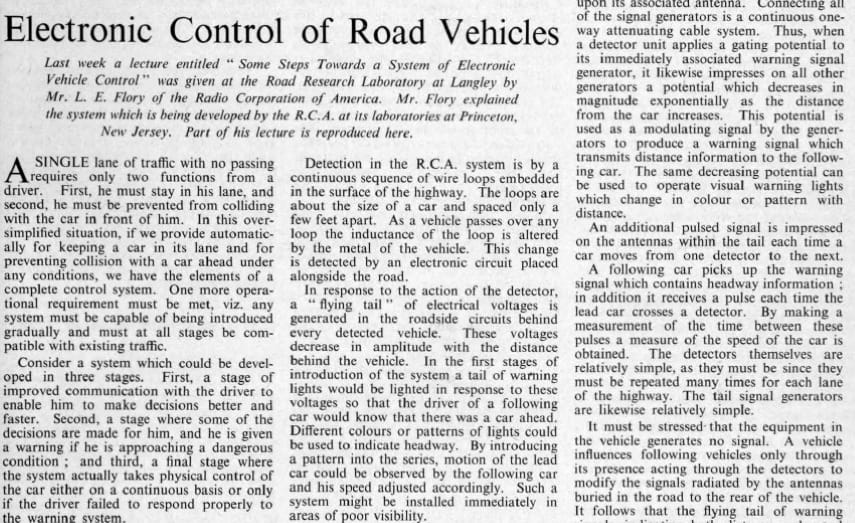 Safety features such as lane-departure warning, automatic emergency steering, automatic emergency braking, and lane keep assist issue audible or tactile warnings to drivers deviating from their lane. However, good ideas like these have to start somewhere and in July 1960 a Mr LE Flory of the Radio Corporation of America (RCA) delivered a lecture at the Road Research Laboratory (or Transport Research Laboratory Ltd as it is known today) on a new system aimed at controlling cars electronically.

But where today’s automotive manufacturers market driver assistance and greater autonomy in terms of preserving life, Mr Flory saw the prevention of accidents largely in terms of cold, hard cash.

“The cost of accidents in property damage and loss of time is, in the United States, equal to the cost of fuel consumed,” he told his audience in a talk titled ‘Some steps toward a system of electronic vehicle control’.

“In addition, from a strictly engineering standpoint, any method of increasing the efficiency of movement of traffic resulting in better loading of the highways is just so much money in the budget.”

The big idea from Flory and RCA is standard now, but the way in which it has been implemented owes everything to ongoing technological advances that have negated changes to infrastructure proposed in the talk at Langley.

Introducing his lecture, The Engineer asked: “How many years will it be before a motorist, on approaching a main road, will be able to feed simple route instructions into some device in his car, and then leave the entire job of driving to automatic gadgets in the car and on the road?” Flory answered by describing how automatic control is achieved under the simplified conditions of single-lane traffic, namely keeping the car “in lane” and preventing it colliding with the car ahead.

This, said The Engineer, is a first step in developing a comprehensive system of vehicle control which might be introduced in stages, each stage “compatible” with existing traffic and the whole system strictly following the “fail safe” concept.

According to Flory, the stages went as follows: “First, a stage of improved communication with the driver to enable him to make decisions better and faster. Second, a stage where some of the decisions are made for him, and he is given a warning if he is approaching a dangerous condition; and third, a final stage where the system actually takes physical control of the car either on a continuous basis or only if the driver failed to respond properly to the warning system.”

Focusing here on the first stage, Flory said that accomplishing lane guidance would require interaction between the vehicle and the highway lane, by laying down in or on the roadway a trail which a vehicle can follow.

“The most direct method is the insertion of a cable carrying an alternating current down the centre of the lane,” Flory told his audience. “Simple detectors mounted on the car then provide control signals to the steering mechanism which will keep the car centred over the wire. This method permits the use of different frequencies for different lanes and route selection by change in frequency.”

Echoing today’s discussions around vehicle autonomy, Flory suggested that collision prevention is a more complex matter as it involves the interaction of two vehicles moving independently, only one of which can be assumed to have any special equipment.

“This situation suggests that the road must be the agent for transmitting a signal from the lead car, which may or may not be equipped with control devices, to the following car which is considered to be electronically controlled,” he said. “Thus, the active source of the warning signal indicating the presence of the lead car must be within the road since a perfectly passive vehicle must make its presence and speed known to any equipped car following it.

“The road installation for collision prevention has thus the joint function of detecting vehicles at any point along the road, and of generating warning signals over a prescribed distance of road behind every detected vehicle”.

The fast lane to success

Moving in from the fast lane

Promoted content: Why the future belongs to the digital twin