One of the peculiarities of obituaries in archive editions of The Engineer is that they often don’t cover what you might expect them to. We remember George Westinghouse as the father of alternating current, and for his ‘war of the currents’ with Thomas Edison, who was a proponent of direct current, believing it safer. It’s a colourful story, taking in as it does the deliberate electrocution of an unfortunate elephant called Topsy (by Edison). The Engineer’s lengthy obituary of Westinghouse doesn’t mention rivalry with Edison once; indeed it hardly mentions AC at all. 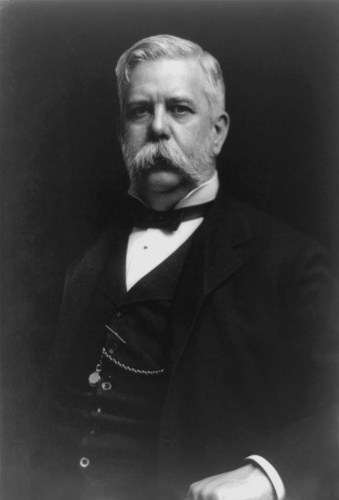 In fact, the bulk of the obituary is dedicated to one of Westinghouse’s earlier inventions: the railway air brake. Westinghouse began to think about this when he was about 20, after he was delayed for two hours between his home in Schenectady, New York and the Bessemmer Steel plant in Troy, New York, by the collision of two freight trains. ‘The loss of time and inconvenience arising from this accident suggested that if the drivers of the two trains had had some way of applying brakes to all the wheels the accident might never had happened’ the obituary says (continues below).

While thinking of ways this might be achieved, Westinghouse read about the construction of the Mont Cenis Tunnel, the first large tunnel under the Alps. This was done using newly-invented compressed-air drills, which quintupled the rate of progress the tunnelers had msade using hand drills. At the time, Westinghouse had been experimenting unsuccessfully with powering his brake using steam, but he quicly switched to pneumatics, and filed a patent for his invention in 1867, when he was just 22 (his first of over 250 patents). Characteristically, he then started a company to make and sell his brakes, and quickly made his first sale to the Pennsylvania and Panhandle Railroad. As it happens, in the first trial of the system, the driver used the brake to avoid hitting a horse on the track.

Things didn’t go all his way, however. ‘One of the railway magnates of the time told him that anyone who proposed to stop a train by compressed air was nothing short of a fool,’ the obituary says. ‘But Westinghouse was not a fool, and he had introduced a brake which was, even in its then condition, vastly superior to anything which had been hitherto devised.’

The obituary mentions that Westinghouse had a talent for spotting and befriending talented engineers, and getting them to work with him. It picks out Nicola Tesla, whose three-phase motors Westinghouse put on the market; Oliver Shallenberger, who invented the watt-hour meter; and Charles Scott, inventor of three to two—phase transformers.

Westinghouse was a compulsive inventor and worked across a wide range of fields, not at all confined to railways and electricity — although he held 70 electrical patents including 16 for metallic-filament lamps. It was said of him that ‘his mind is so quick that he sees the essential point in a complicated situation even before the story can be fully told to him,’ and that ‘once determined on his course, he is not to be laughed out of it, frightened out of it, or bought off.’

March 1948: London's zero-emissions trolleybus was ahead of its time