Launched to investigate interplanetary space between the orbits of Earth and Venus, the US space probe Pioneer V earned the distinction of confirming the existence of interplanetary magnetic fields. " Paddlewheel " arrangement of solar cells attached to mock-up of satellite for output tests

Reporting on the probe’s purpose in the wake of its launch The Engineer wrote that ’the experiments being undertaken while the probe is in orbit include the measurement of high-energy, or “hard” radiation, particularly that proceeding from the sun’.

’These investigations,’ it continued, ’are of particular importance because no previous probe has had an orbit so close to the sun.’

Describing the probe’s key features, the magazine wrote ’the counter consists of six argon gas cylinders ranged about a seventh cylinder. Inbound particles ionise the gas in one or more cylinders according to energy and produce proportional electrical impulses.’

Also described was the development of a micrometeorite device for measuring the number and momentum of meteoric dust particles striking the probe. ’The entire unit weighs less than 1lb and consists of a diaphragm, about twice the size of a playing card, mounted on the skin of the probe, and an internal microphone. The sound of impact is translated into electrical impulses for transmission to earth.’ 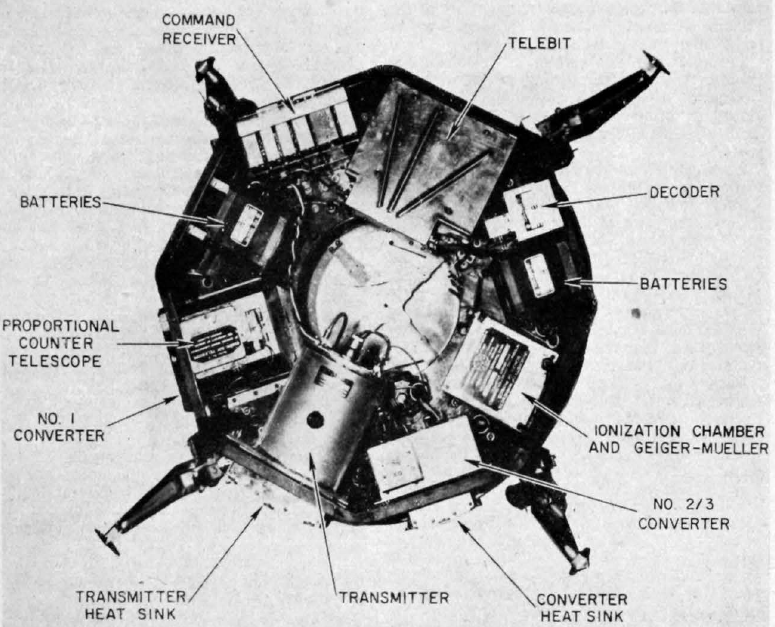 The illustration at the top of this story shows tests in progress on the silicon solar cells used for charging the internal batteries, the ’paddle wheels’ containing the cells being attached to a mock-up of the actual probe. Much of the data collected by the probe was received by the Lovell radio telescope at Jodrell Bank Observatory.

Pioneer V was one of a number of probes launched under the Pioneer programme. Perhaps the most notable were Pioneer 10 and 11, which explored the outer planets, now thought to be on trajectories leading them out of the solar system. Last contact with Pioneer 10 was in 2003, while 11 hasn’t been heard from since 1995.