May 1949: The Boulton Paul Balliol

The Boulton Paul Balliol had just about everything the RAF and Fleet Air Arm could want from an advanced trainer, writes Jason Ford

Specifications defined by the Ministry of Supply asked for an all-purpose service training platform with high performance and good manoeuvrability. It had to be suitable for training in day or night flying, gunnery, navigation, bombing, photography, or glider towing. Finally, the new aircraft had to be ‘readily adaptable for deck landing’. 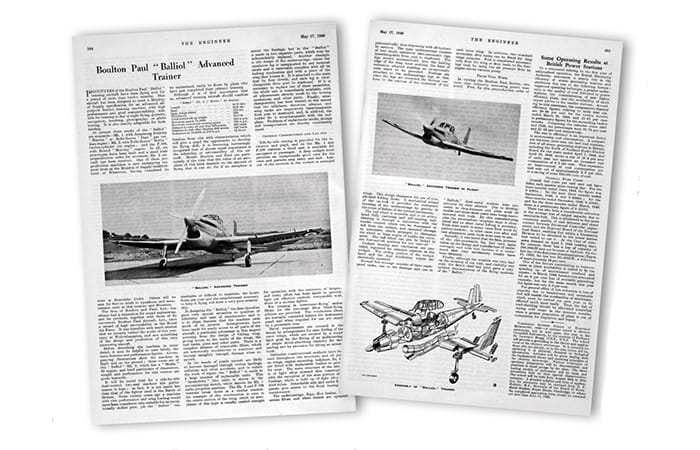 Boulton Paul Aircraft Ltd delivered on the specs with the design of three Balliol variants, namely the Mk. l with an Armstrong Siddeley Mamba or Rolls-Royce Dart gas turbine engine; the Mk. 2, with a Rolls-Royce Merlin twelve-cylinder vee engine; and the P.l08, with a Bristol Mercury engine.

By the time The Engineer visited the company’s facilities in Wolverhampton, six prototypes had been built and a small-scale preproduction order for 17 Mk. 2 aircraft had been received. In the air, the aircraft was said to perform as well as the British fighters that took part in the Battle of Britain.

“Some twenty years ago a machine with this performance and wing loading would have been considered only suitable for an exceptionally skilled pilot, yet the Balliol can, we understand, easily be flown by pilots who have just completed their primary training,” our correspondent noted.

Boulton Paul Aircraft Ltd was acutely aware that an advanced trainer was only as good as the flying time it afforded trainee pilots, so the company ensured that the Balliol would give aircraft maintenance teams easy access to all parts of the aircraft. Of particular note was the Balliol’s folding wing, which gave access to ‘the inside of the wings, the fuel tanks, guns and other parts.’

“In the hands of pupils, aircraft are likely to become damaged through violent landings, collisions and other accidents, and to reduce the work of repair, the Balliol is made in a large number of replaceable units,” said The Engineer.

One example of this could be found in the centre section of the wing, which on similar aircraft would have carried straight across the fuselage but was made in two separate parts so that they could be replaced independently.

“Another example is the design of the undercarriage, where the cantilever leg is unsupported by any external struts and is removable complete with all its locking mechanism and with a piece of the wing that houses it,” our correspondent reported. “It is attached to the main spar by four dowels, and each leg is interchangeable from port to starboard. If it is necessary to replace one of these assemblies, the whole unit is immediately available, with all adjustments already made to the locking mechanism and other parts. Finally, interchangeability has been studied to the extent that the tailplanes, elevators, ailerons, and wing tanks are respectively interchangeable from port to starboard, and, in addition, the rudder fin is interchangeable with the tailplane. Problems of replacement stocks, storage and transportation are thereby considerably eased.”

'For all its versatility and utility, the Balliol was an aircraft that was in the right place but very much at the wrong time'

For naval use, the Balliol was fitted with easy folding outer wings (secured by a simple latch gear), a shock-absorbing undercarriage for deck landing, and an arrestor hook. But for all its versatility and utility, the Balliol was an aircraft that was in the right place but very much at the wrong time.

At the time of writing, a pre-production Balliol has completed tests at Boscombe Down and was undergoing ‘tropical trials’ at the Ministry of Supply’s facilities in the Sudanese capital Khartoum. Others, our correspondent said, were set for service trials to squadrons and maintenance crews in the UK and Rhodesia (Zimbabwe).

Balliol aircraft were, however, only delivered in meaningful numbers to the Flying Training School at RAF Cottesmore where they replaced the North American Harvard. The Sea Balliol served 781 Squadron at Lee-on-Solent but by 1951 the curtain was coming down on propeller-driven advanced pilot training as the RAF transitioned to jet-powered trainers.

The weather conditions were very poor when The Engineer visited Boulton Paul Aircraft Ltd, but our correspondent was thrilled by what the company had achieved, reporting that despite poor visibility ‘the firm’s chief test pilot gave a very spirited demonstration of the flying qualities of the Balliol.’

MORE FROM THE ARCHIVE

May 1958: the collapsible helicopter

May 1915: The Gretna Rail Disaster