A year with the carriers

Guest blogACA engineering directorDavid is employed by BAE Systems, and is responsible for all the engineering work being carried out on the QE Class programme. Previously, he was design manager for HMS Ocean, Albion and Bulwark, and was chief engineer on the Type 45 Destroyer programme.

As we approach the end of the year it is quite interesting to look back at what has happened in the project to deliver the Queen Elizabeth Class Aircraft Carriers over the past 12 months. If 2011 was characterised by the building of large blocks at locations all around the country, 2012 was all about transporting the finished blocks to Rosyth and 2013 about assembling the blocks within the build dock.  2014 however was the year in which we moved from a construction project in the dock through to having a real ship afloat in the basin.  The ugly duckling with all the parts at different levels of painting and surrounded by scaffolding transformed in the summer into a magnificent swan, unveiled to the world at the naming ceremony by the Queen on the 4th July.  When I talk about what I do outside of work these days the response has changed from disbelief that the UK were still building aircraft carriers through to questions of when we will see these ships operating with their aircraft, and that day is coming ever nearer. 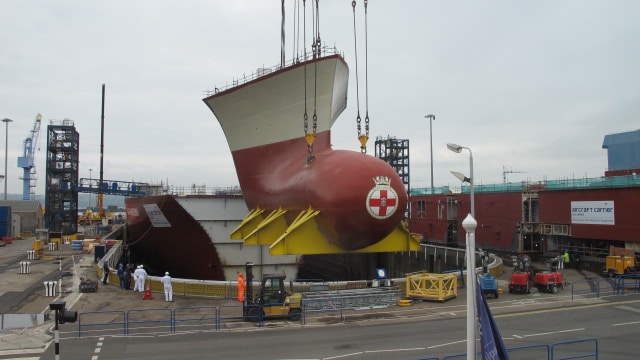 When we are embroiled in the day to day activities and the addressing of the problems that occur along the way it is all too easy to lose sight of the amazing achievements of the roughly 10,000 people working within the Aircraft Carrier Alliance and the wider supply chain that has resulted in HMS Queen Elizabeth being named and floated up on the dates that were set back in 2008 when the Manufacturing Phase contract was signed.  This has been a huge team effort and I hope that everyone who has had any involvement in the project feel the same sense of pride as I do in what has been achieved.

At the start of the year the hull of HMS Queen Elizabeth was structurally complete, but there were still a number of catwalks, radars and masts to be installed, underwater there were tanks to be closed up overboard inlet and discharge piping to be made watertight and the installation of shafting and propellers to be completed.  Many people thought that completing this work together with applying the 1.5million metres squared of paint in time for the naming ceremony and float out in July was a very tall order, but it was all achieved and on the 17th July HMS Queen Elizabeth was afloat and alongside her berth in the non-tidal basin at Rosyth. 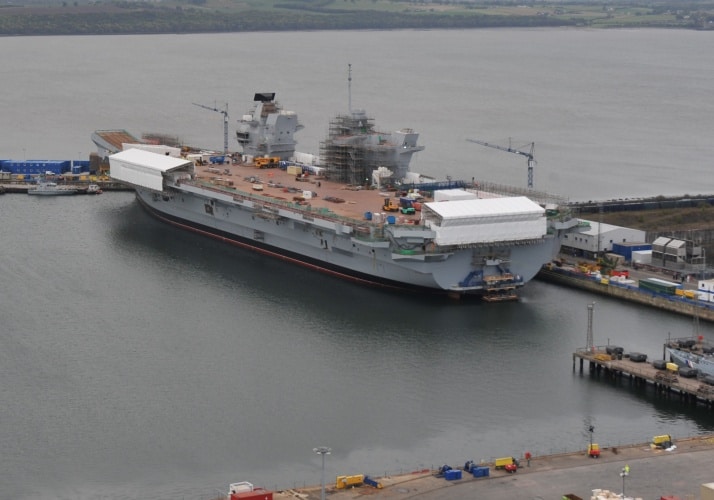 Since that time a lot more has occurred.  In September the build dock was empty while the dock blocks were refurbished, by October lower blocks 2 and 3 of HMS Prince of Wales were docked down, in November the two blocks were skidded together and now in December over 40% of the hull of Prince of Wales is assembled in the dock including upper blocks and the first sponson blocks.  Preparation is underway to complete the painting of the forward tanks, an operation that occurred on Queen Elizabeth less than a year ago such is the learning that has been applied to the second ship. 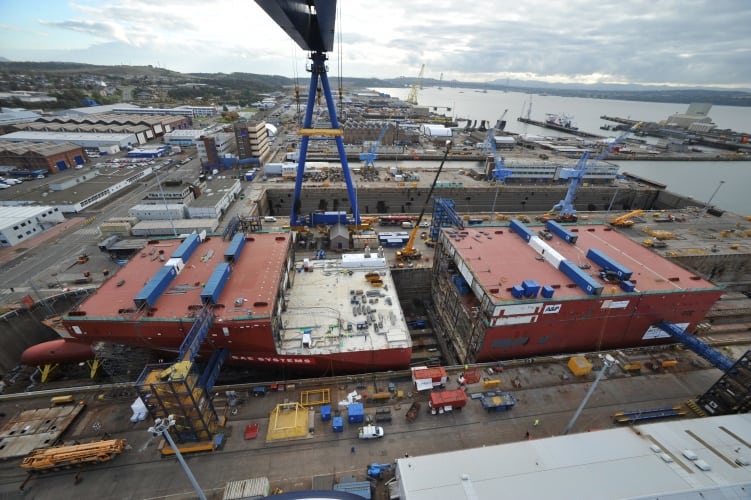 Much has continued to happen on Queen Elizabeth since she has been afloat.  Over 10,000 electrical cable terminations are being made per week and about 1,000 pipes are being pressure tested each week.  This has enabled the ship to be connected to the shore 11kV electrical supply and the High Voltage systems on board the ship energised.  The Ship Control Centre(SCC) has been brought to life with Integrated Platform Management System (IPMS) software running on the ship’s computers and being used to control breakers in both the High Voltage and Low Voltage systems.  The large screen displays in the SCC are fitted and will shortly be displaying IPMS data.  The Operations Room is also progressing with the first of the Combat Management System computers now installed and with the network of fibre optics that make up the integrated network  (through which all the ships data is shared around the ship) completed in the forward part of the ship. This Integrated Network Environment has been energised for the first time this month.

Preparations are underway for the embarkation of fuel early in the New Year that will allow the ship’s diesel generators to be started and the ship to start to generate its own high voltage power, which will ultimately lead to the turning of the propeller shafts in mid-2015.

Yes a great deal has been achieved through the year but there remains a great deal more to do in order to achieve our objective of First of Class Flying Trials off the east coast of the United States in 2018.

Start of a momentous year for Carrier project

Launching the Queen of the Navy