Dumbed down for prime-time

I was recently sat watching a programme about Crossrail on the BBC's second channel. I suspect my initial mistake was that, inspired by memories of the past, I was expecting a high quality and in depth documentary. 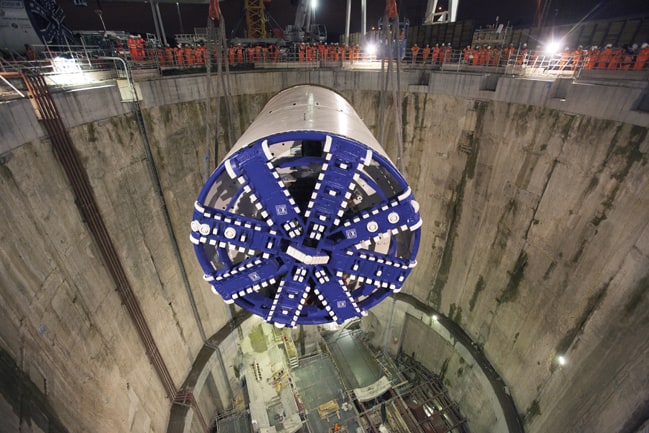 Don't get me wrong, it wasn't very bad, but if you have memories of Tomorrow's World then you may have ended up a little disappointed. Two aspects of a sequence about putting in a new over bridge station probably sum up the particular issues I have with it.

Firstly there was the build up to unloading large sections of the pre-fabricated structure into the car park of an adjacent school. The voice over dramatically declaiming "..luckily its a Sunday and no-one is using it..." (or some similar idiocy) saw me turn to Mrs Secret-Engineer and say "There's some poor sod who's spent a lot of time and effort organising things so that would be the case."

I mean really, are we to believe that such an important aspect was not mapped and planned, that it wasn't seamlessly woven into the intricate scheduling that lies behind Crossrail? Did they turn up Sunday morning with the lorry and think “Oh, that's fortunate, just imagine if we'd been here tomorrow?” A minor point perhaps but to be so dismissive of such an important element of our profession is not only a disservice but to actively sell us short in the eyes of the public. It can only reinforce the seemingly established opinion that some stuff “just sort of happens.” If you were involved in the planning, negotiations and logistics of that construction, and are reading this – you have my most sincere commiserations.

Secondly, much was made of the small amount of clearance for craning one of the major assemblies into place. This required more than the usual delicacy as the access was tight and they had to avoid clobberising a tubular steel handrail. Cue breathless narration followed by shots of the piece being hoisted into the air. Add in dramatic music, close in on the edge of a girder being inched perilously close to the hand rail, more excited narration, the music gets more strident.... wide shot! Close up! Ever closer!!

More drama to the music....UNTIL!!!!......they hacksawed a small section of handrail out so they could get past it. Now, call me old fashioned but I'd much rather have had a little something about the problems of thermal expansion or the maths behind hoisting such a large and heavy structure.

To return to the start of this, I cannot believe that the public are inherently more idiotic than they were during the 70's and 80's. Times when you had Tomorrows World, The Great Egg Race and a nascent Scrapheap Challenge. Times when you may be lucky enough to catch a Horizon special about how a Formula 1 Team (Williams) coped with the rule change that banned sliding skirts or a stand alone documentary about the development of the Spitfire as told by an experienced pilot (Raymond Baxter). Times when artificial melodrama wasn't required because the programme makers had the confidence to know that such cheap tricks weren't needed to keep the viewer enthralled by a technically complex story so long as it was told well.

I can only hope that the penny will drop, or fashions will change and we can use the much more sophisticated techniques of today to build on what has gone before rather than detracting from it. The recent “slow television” programmes, including those showing Mr James May rebuilding various devices, at least give hope.

Pump in its prime