Inspiring the next generation with the internet of things

Professor Danielle George thinks the Internet of Things will serve to inspire the next generation of engineers. That’s why she’s backing a competition that will produce exciting new examples of connectivity

I’ve always been an optimist when it comes to how technology might impact the future. A desire to change the world in a positive way was one of main reasons I drove myself on to gain a PhD in electrical engineering and start work at the famous Jodrell Bank Observatory. Now as Professor of Radio Frequency Engineering and Vice Dean for Teaching and Learning at the University of Manchester, I’m still driven by a keenness to capture knowledge and apply it in the modern world.

The IoT will have a profound and positive effect on all of us. Its impact will be similar to what was seen when electricity was first harnessed.

Indeed, when I was invited to give the prestigious Royal Institution Christmas Lectures in 2014, I chose to put technology at the heart of my broadcasts, focussing on how cutting-edge inventions such as 3D printers would enrich our lives. I really do believe that technical endeavour and innovation will provide many of the answers to the key challenges that lie ahead.

This is particularly true when it comes to the Internet of Things (IoT), the networking of physical objects embedded with electronics, software, sensors, that enables the objects to collect and exchange data. In my opinion, the IoT will usher in an exciting era of connectivity, and with that will come endless possibilities for new technologies and systems.

The IoT will have a profound and positive effect on all of us. Its impact will be similar to what was seen when electricity was first harnessed. Now, in place of electrification, we have a period of ‘datafication’. And I believe that it will play an underpinning role in helping us to solve some of the world’s grand challenges.

Applications of IoT can already be seen across consumer and industrial sectors, leading to more connected products and factories. Bosch, for instance, has developed a smart parking assist system that uses occupancy sensors in towns and cities to inform drivers of available parking spaces. Elsewhere, the IoT is already being applied across multiple sectors, from home systems that integrate heating, light, doors and windows, to the provision of multi-functional smart tools that are being used in aerospace factories.

The possibilities are endless. Research suggests that there will be 25 billion internet-connected ‘things’ by 2020, and it will be young engineers who are best placed to make the most of the potential that it brings. The next generation of engineers have grown up hearing about the Internet of Things, they have never known a world without it. The imagination of these young engineers will take connectivity even further, because they are familiar and comfortable with the technology. They will come at things from a different angle and give us new ways of solving problems.

The only factor that might hinder the development of the IoT is a lack of engineers with the right mix of skills to take it forward. I’m particularly concerned by the shortage of young, women engineers, a problem exacerbated by a lack of visible role models.

If we can show society that the impact of engineers is very high, then I think that we will attract greater numbers, and with that more females

It’s a massive problem. Engineering suffers from an image problem – we all know that. But things won’t improve unless if we get ourselves out there and show people just how ingenious engineers really are.

You don’t necessarily have to wear a hard-hat or a boiler suit to do engineering. You don’t have to lose your creativity to be an engineer – in fact creativity is a really good trait to have. I’m not sure that that message is quite out there yet. We need to carry on banging the drum. If we can show society that the impact of engineers is very high, then I think that we will attract greater numbers, and with that more females.

With this in mind, I’m delighted to be involved with a new campaign that challenges young women engineers to help bring the IoT to life. The #BetweenUsWeCan initiative, conceived and delivered by Bosch, includes an online competition that seeks out the best new applications of the IoT. Three winners will get the chance to pay a two-day visit to Bosch’s state-of-the-art Renningen and Reutlingen research and development facilities near Stuttgart, in Germany, as well as a year’s mentoring from some of Bosch’s top engineers. 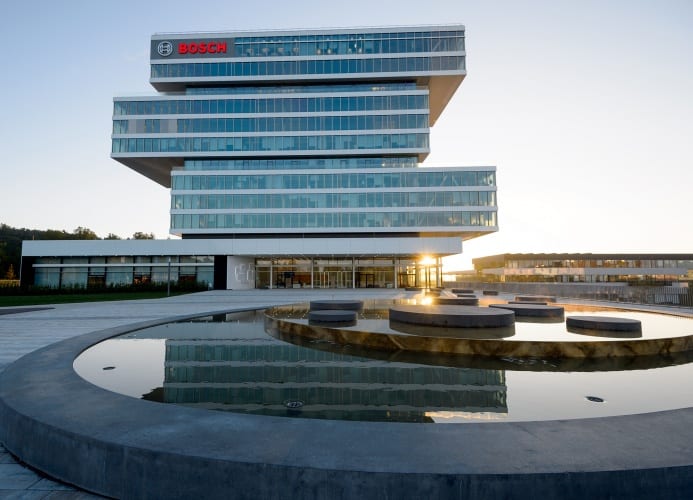 The #BetweenUsWeCan campaign is an exciting initiative, and I’m looking forward to playing my part in the judging process. The competition will help create a new wave of female role models, and campaigns like this can only have a positive effect. So I would urge any young women who have any bright ideas around the IoT to enter the competition – with the prizes that are on offer, it really could be a life-changing experience.

For more details of the Bosch competition, go to www.bosch.co.uk/betweenuswecan

Inspiring the next generation of engineers

The total network: how the internet of things is reshaping our world