This week, US company Hyperloop One announced that it had performed the first ever full-system test of the technology at its Nevada HQ. The run, which took place back in May, saw a sled hitting 70 mph in the company’s 500m ‘DevLoop’ vacuum test track. Company co-founder Shervin Pishevar described it as Hyperloop One’s ‘Kitty Hawk moment’, invoking the spirit of the Wright brothers and their first powered flight over a century ago. But will we ever see a commercial Hyperloop system shooting pods of passengers around the world at 700 mph?

Undoubtedly, Orville and Wilbur must have had their detractors back in 1903, even after they reached that important first aviation milestone. However, the first commercial flight took place just over a decade later; an airboat ferrying passengers between Tampa and St Petersburg in Florida. Despite the technological advances we’ve seen over the past 100 years - and the unfettered enthusiasm many have for the concept - one imagines it will take considerably longer before we see a commercial Hyperloop service in action.

To begin with, the technical challenges are significantly more complex. Once the aerodynamic principles of powered flight had been established, engineers were able to apply the technology of the day and make reasonably rapid advances. Initially, at least, little infrastructure was required. Rudimentary airports were able to slowly evolve into the modern behemoths we know today, adapting in step with aviation technology. Hyperloop has no such luxury. Where aviation had the open skies as its conduit, Hyperloop has congested land masses through which virtually airless tubes must be constructed and maintained.

“Building a sophisticated, evacuated tube system that is elevated on columns and aligned to a standard suitable for 700 mph operation will definitely be a challenge,” said Philippa Oldham, head of Transport and Manufacturing at the Institution of Mechanical Engineers (IMechE).

“As the distance of the trials increase there will be many engineering problems to solve including that of managing track alignment. Within the UK we would not be able to use any existing transport corridors at these speeds due to their lateral curvature. In addition, travelling at those speeds means that any fault in the system would mean everyone on board would die - just as you would at 60,000 metres if you were rapidly decompressed.”

Admittedly, air travel is not without its safety concerns either. But while 35,000 feet is a precarious place for something to go wrong, in many respects it is far removed from a variety of potential harms. To interfere with an aircraft at this height, you would generally have to either be on board or have military weapons at your disposal. Sabotaging a Hyperloop track at ground level would likely be a lot easier, and securing the infrastructure will be a primary concern. 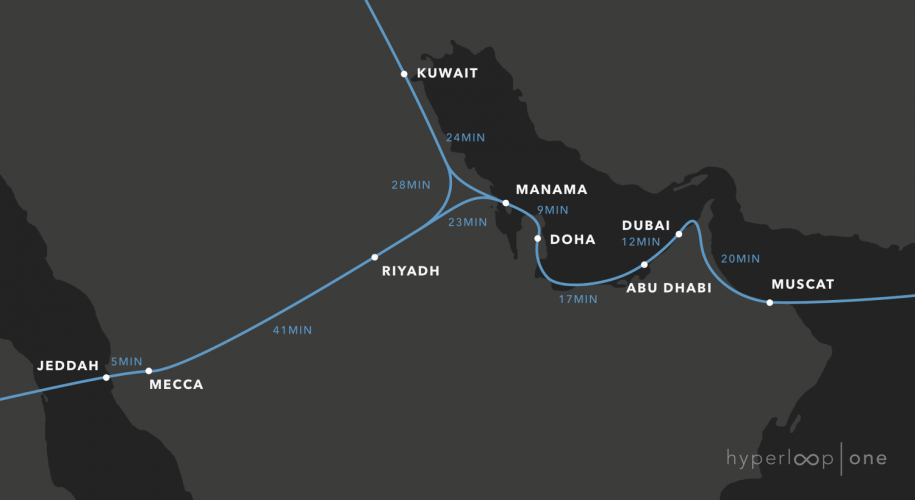 The cost of building, maintaining and protecting Hyperloop tracks will almost certainly be astronomical, which is one of the reasons why the Gulf region is at the vanguard. Last year, Hyperloop One signed an agreement with the Dubai Roads and Transport Authority to evaluate the system’s feasibility in the UAE. At this year’s Middle East Rail event, wider plans for a Hyperloop system connecting major cities across the Gulf were revealed.

The Middle East’s wealth is matched only by its appetite for development, and in many ways the vast tracts of undeveloped land and rapidly growing cities are readymade for a Hyperloop system. Conversely, building it in a region with such political instability could be a recipe for disaster. Regardless, it certainly appears the most likely candidate for the first major implementation.

And good luck to them. I’m sceptical about many aspects of Hyperloop, but it is exciting technology with the potential to transform our transport system. Even if we never see a commercial Hyperloop in operation, it is helping to inspire a new wave of young engineers. In February, TU Delft won SpaceX’s Hyperloop Pod Competition, and the Dutch university is now building Europe’s first test track.

Closer to home, Edinburgh University’s HypED team has 50 members from multiple disciplines working together to build a half-scale Hyperloop pod. Once complete, it will be tested at SpaceX’s test track in California. The HypED team is keeping a diary of their progress for The Student Engineer, and the first installment can be read here.

Although it may be impractical, dangerous, inordinately expensive and probably a bit bonkers, Hyperloop has captured the public’s imagination and is pushing the boundaries of engineering. That, in and of itself, is worth celebrating.

Sustainability is more than just a buzzword

Why energy resilience is more important than ever