For this project, the partners developed a 4G wireless protocol to control robots in Ocado’s new retail warehouse in Andover. It needed to be able to transmit and receive data from thousands of robots concurrently, communicating with each robot 10 times per second with guaranteed latency. However, existing wifi access points could handle only 64–256 concurrent clients..

The development of mobile or cellular telecommunication is surely one of the most disruptive of recent decades. Those without a mobile phone are now in a distinct minority, and video- and data-enabled smartphones are the norm. Even in developing countries, mobile devices have become the primary way that most people access the internet.

However, this technology depends on infrastructure. A mobile phone is no use unless the electromagnetic bandwidth is available for it to transmit and receive, and the increasing capability of smartphones to receive and transmit high-resolution video and hi-fi audio – along with growing demand for such services – means that the bandwidth reserved for mobile telecoms is constantly under pressure. Moreover, as autonomous vehicles and the industrial and domestic Internet of Things develop, more and more non-human devices will start sending and receiving large amounts of data over the airwaves. 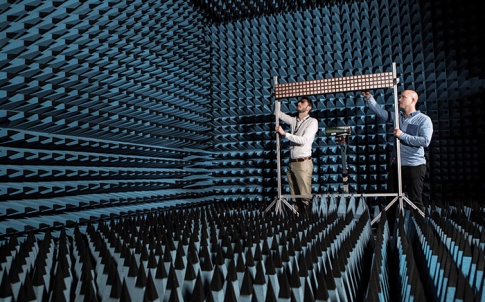 In order to tackle this, the mobile telecommunications sector is developing 5G networks – the successor to the 4G systems currently in use.

“There are three main use cases for 5G that are going to become more prevalent and will need more research and increased capability to make them work,” explained Jeremy Twaits, a senior technical marketing engineer with National Instruments (NI), a key partner in the winning project in the data and connectivity category of the 2017 Collaborate to Innovate Awards. “One of those is enhanced mobile broadband, and that’s basically increased capacity and throughput, which to the consumer will mean faster access to data; faster streaming of video, for example.”

“Another feature is, as more devices become connected, there’s a need to be able to simultaneously link into the network,” Twaits added.

The third new use case has the capacity to be truly transformative and represents a major difference between 4G and 5G, Twaits said. “This is ultra-reliable and low-latency access to the network, having under 1ms between a signal being sent from a user to being received and able to be acted upon by another user or node on the network,” he explained, a node being anything that transmits or receives, whether human controlled or autonomous.

“This could allow real-time control of systems over a network; for example, remotely controlling a robot in a hazardous environment. It would enable it to react to real changes in the environment, such as rubble falling or the ground shifting. If there’s a lag between the controller and the robot, they won’t be able to react in time to the changing scenarios.”

There are two sections of the electromagnetic spectrum available for 5G, Twaits said. “One of these is sub-6GHz and the other is more in the microwave, millimetre-wave space. We have swathes of unoccupied bandwidth in the higher-frequency areas but, in the sub-6GHz spectrum, we already have so many communication systems operating there – wifi or existing mobile networks – so we have to be much more efficient in the use of that spectrum.”

One method for increasing 5G wireless spectral efficiency, especially for areas where there will be a high density of nodes all needing to operate simultaneously, is massive MIMO (multiple input, multiple output). NI worked with the universities of Bristol and Lund in the Netherlands on developing and testing a prototype massive MIMO system, which last year broke the record for spectrum efficiency.

“Massive MIMO works by having multiple antennas performing both input and output, and they can simultaneously transmit signals to multiple users within the same portion of spectrum,” said Twaits. “Bristol began researching this about four years ago, and built up this testbed to figure out whether massive MIMO was a feasible technology for incorporating into 5G networks. They also experimented with what capability could be achieved, what level of spectrum efficiency was possible, what were the characteristics of actually sending data from multiple antennas across the air, and how it would deal with interference, with users moving around, and whether it could keep the data rates up.”

This research, led by Prof Mark Beach of the university’s communications systems and networks group, was triggered by Bristol is Open, a project run between the university and the city council to use a combination of wireless and optical networks to turn Bristol into the country’s first ‘open, programmable city’, with users able to access real-time information an air quality and flows of energy and traffic.

Lund University, also looking into this subject, set up a base station with 100 antennas in a 4 x 25 array; and, when the two universities linked up, they went further with a 128-antenna array and 12 simulated users.

Twaits said: “The system itself is built upon the NI massive MIMO prototyping system, and uses USRP [universal software radio peripheral], a software-defined radio product that can be programmed and tuned to varying frequencies, bandwidths and radio signals. The software it’s built upon is the NI LabView Communications Systems Design Suite, optimised for radio-frequency and wireless prototyping. The Bristol and Lund universities were able to put the whole system through its paces and, along with NI, to debug the system and provide feedback to help make it robust and able to be deployed by multiple organisations – both commercial and academic – that are researching massive MIMO.”

The 128-antenna array was tested at BT’s AdAstral Park technology campus in Suffolk, where it achieved over 79b/s/Hz of spectral efficiency over a 12MHz bandwidth, with the 12 users having fully bidirectional, real-time communication at 3.5GHz, a world record. Further experimentation achieved efficiency of 145b/s/Hz. Collaborate to Innovate judge Professor Danielle George puts that into perspective: “That is a greater than 20-times increase in bandwidth efficiency compared to current 4G cellular technologies.”

Arrays of hundreds of antennas could be used for situations such as stadia in large sporting events, Twaits said, to cope with many people all trying to stream video simultaneously, whether downloading replays or uploading their own video to cloud servers. Samsung is developing such a system for the 2018 Winter Olympics, while Huawai is working on one for the 2018 World Cup.

Factories with large IoT installations using wireless systems could also use such arrays, as might busy motorway junctions with many autonomous vehicles passing through, all sending information on their own position and speed while receiving data from surrounding traffic, information services and smart infrastructure.

For this project, the partners developed a 4G wireless protocol to control robots in Ocado’s new retail warehouse in Andover. It needed to be able to transmit and receive data from thousands of robots concurrently, communicating with each robot 10 times per second with guaranteed latency. However, existing wifi access points could handle only 64–256 concurrent clients.

The first deployment system in the world to use the unlicensed 4G spectrum for warehouse automation, it can handle up to 1,000 clients per access point within a 50m radius. It also has potential applications in controlling fleets of autonomous vehicles at airfields, factories and construction sites, making the warehouse home to the world’s most densely packed mobile network.

Cambridge Consultants contributed its expertise in radio-frequency and digital signal processing technologies, as well as its ability to manufacture small batches of the final product on site. Among the successes of the partnership were the development of a fully featured prototype within two years, rather than the usual three to five years, with the system architecture unchanged from the original definition to the completion of the project.

This project involved the development of IT for design and manufacture in synthetic biology, a rapidly developing field of engineering predicted to be worth almost $40bn (£30bn) worldwide by 2020. It is increasingly dependent on digital biological design that relies on ‘big data’, connectivity and computing infrastructure. Visbion hoped to define a standard for the interchange of information about bioparts and bioCAD tools. Such information is often stored in registers and libraries that use incompatible formats.

Imperial College contributed its expertise in synthetic biology and the development of technical standards, adding to Visbion’s specialism in management, transfer and storage of data. SynbiCITE, the UK's national industrial translation centre for synthetic biology, also based at Imperial, contributed to the understanding of the potential market and the development of the strategy for implementation of the technologies associated with the product, including military-grade encryption for data security. The result of the project is an online database, a ‘broker’ system intended to be a fundamental tool for efficient systematic design in synthetic biology. This could help develop products such as medical and environmental sensors, vaccines, artificial fibres and active ingredients for pharmaceuticals.

Quantum sensor devices were at the heart of this effort, specifically to measure gravitational and magnetic fields, and for precision navigation and timing. Data gathered could be used in geospatial mapping, such as measuring the thickness of permafrost; and in developing signal-free GPS and ultra-accurate atomic clocks.

Additive manufacturing could reduce the size, weight and cost of such devices. However, the sensors are based on ultra-cold quantum gas clouds generated by magneto-optical traps (MOTs); these have dimensions of tens of centimetres, weigh several kilogrammes, are complex and use a lot of energy. The project was aimed at producing a cost-effective range of additively produced quantum-enabling MOT components.

The universities had expertise in ultra-cold physics and MOTs but not in metallic additive manufacture or engineering commercial products; they approached Added Scientific, which had this expertise but had not tackled quantum technology or components that worked in high vacuum. The company designed for additive, optimised printing parameters and carried out market studies to confirm that additive was economically viable. The project was managed through an iterative design methodology to ensure that important considerations were communicated.

Collaborate To Innovate (C2I) is an annual campaign run by The Engineer, including an awards competition and conference, established to uncover and celebrate innovative examples of engineering collaboration