The winning entry in our aerospace, defence and security category shows how electricity generated from a rare element could help power missions to the distant solar system for 400 years, while also addressing a long-term concern of the UK's nuclear industry 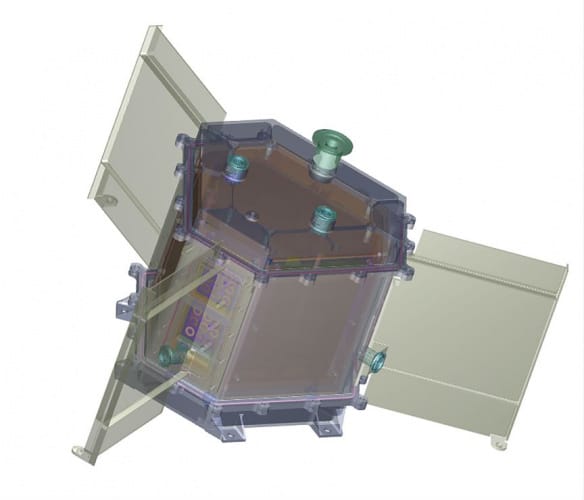 Britain has a unique problem – the world’s largest stockpile of civil plutonium. Built up over seven decades, almost 140 tonnes of the radioactive metal sit in secure storage at Sellafield, and are officially classified as nuclear waste. However, it is potentially a fuel for the nation’s nuclear power stations, but not in its current form. The question of what to do with the UK’s plutonium has dogged successive governments. The winner’s trophy for this year’s aerospace category  has gone to Richard Ambrosi from the University of Leicester, who led a collaboration with the UK National Nuclear Laboratory (NNL) to extract a fuel from the stockpiled plutonium that could power humanity’s exploration of the distant solar system.

Most space probes are powered by photovoltaic cells, but solar power is not suitable for all exploration missions. Deep into the solar system, the distance from the sun is so great that its rays are too feeble to provide enough power. Conversely, too close to the sun and the elaborate cooling systems needed to keep the spacecraft functional require more power than solar panels can provide. On planets and moons with thick cloud cover, the sun cannot penetrate to the surface.

In these cases, engineers use nuclear power. This is in the form of a device called a radioisotope thermoelectric generator (RTG), consisting of a chunk of a radioactive material which gets hot as a result of nuclear decomposition. One end of a thermocouple is attached to the hot material, while the other is kept at the much colder temperature of the spacecraft’s environment. The temperature difference forces a current to flow from hot to cold.

RTGs are extremely reliable: they have been powering the US Voyager probes for decades, and NASA’s Curiosity rover contains one that allows the vehicle to operate during the Martian night. They generally use plutonium 238 (238Pu) in the hot component. But this isotope is in short supply, and is only produced in specialist nuclear reactors. The European Space Agency (ESA), which currently does not operate any RTG-powered spacecraft, decided in 2009 that it would develop its own capability so that it could consider deep space exploration missions, and as part of this effort, NNL contacted Ambrosi’s team at Leicester, who are specialists in RTG technology.

Ambrosi explained to The Engineer that the plutonium stockpile, a result of reprocessing nuclear fuel, was an obvious choice of source for an RTG fuel. “The plutonium isotope it contains is not in itself suitable, but as it is stored its natural decomposition contaminates it with americium 241 (241 Am). If you want to then utilise the plutonium in a nuclear power plant, you have to extract the americium anyway to clean up the plutonium.”

“There was a sort of a marriage brought about by the ESA funded programme,” Ambrosi continued “Our focus is mainly at Leicester on how you take heat and convert it to electrical power. And now we’re focusing on the development of the actual source of heat. It made very good sense for us to work collaboratively because we were both involved in the common ESA program goal of developing a new power generation technology for space applications. The space project was an important catalyst in driving the development of the chemical separation process that allows you to then extract the americium from the plutonium.”

“It’s a relatively simple chemical process,” explained Ambrosi’s colleague Chris Bicknell. “The plutonium is dissolved, and the National Nuclear Lab have developed a proprietary process which allows you to precipitate out the americium from that solution. And then you can harvest that americium and effectively what emerges from that is a ceramic powder, which you can then turn into a pellet.” This consolidated ceramic pellet becomes the hot side of the RTG in a spacecraft.

241 Am is suitable for use in RTGs, but it is not a direct replacement for 238Pu. Although it has a half-life of over 400 years, its power density is only a quarter that of 238Pu and it requires more shielding.

The Leicester team developed a thermoelectric conversion technology specifically for this project, with a special geometry for the thermoelectric modules designed to maximise the temperature difference between the 241Am pellet and the exterior environment. The element that converted temperature difference into electric current was a semiconductor based on bismuth telluride, and earlier this year the team demonstrated that this could produce enough current to operate an electric light. The Leicester team developed a novel spark-plasma sintering technology to synthesise the bismuth telluride, and attached a capacitor-based electricity storage system to the generator which acted as a power source for the light.