The growing amount of man-made junk orbiting the Earth is prompting calls for a cosmic clean up. Jon Excell reports

It’s supposed to be a tranquil place; a peaceful vantage point on a troubled world. But these days the astronauts aboard the International Space Station (ISS) spend as much time looking nervously over their shoulders as they do gazing at Earth, fearful of the growing amounts of man-made detritus hurtling erratically through orbit.

Several times over the past few years the orbiting platform has been forced to use its boosters to avoid a possible collision. Most dramatically, in March 2009, its crew had to take refuge in the attached Soyuz return craft when a chunk of debris from a US launcher passed within a mile of the fragile structure.

Frightening stuff. And a graphic illustration of a wider problem that’s keeping satellite operators – and indeed anyone with a stake in space – awake at night. Space scientists estimate that there could be more than one million items of manmade debris orbiting the planet. And, for the scores of satellite operators for which an orbital slot is a valuable slice of real estate, this belt of manmade junk represents a pressing commercial headache.

The big wake-up call came last year, when a satellite in the Iridium communication constellation collided with a decommissioned Russian Cosmos surveillance satellite and generated around 1500 fragments of debris bigger than 10cm. Since then, satellite operators and space companies have ramped up their efforts to address the problem.

The first step is determining exactly what is up there – and according to Qinetiq’s Chris Saunders, this is no easy task. There are currently about 15,000 observable objects orbiting the Earth, at least 80 per cent of which are debris, ranging from decommissioned satellites and spent upper stages, to camera lens covers and astronaut gloves. But Saunders, who is working with ESA on the development of a situational-awareness system for tracking orbital objects, explained that current detection techniques are somewhat limited. For low-earth orbit (160-2000km), ground-based radar and telescopes are able to detect objects down to about 5cm. For the considerably higher geostationary orbit (36,000km) it is only possible to track objects that are greater than 50cm. The problem is that these visible objects constitute a small amount of what is up there. ’If we go below that size limit there are probably about half a million man-made objects orbiting the Earth,’ said Saunders. ’If you go down to things such as flecks of paint there are probably more than a million, and at the very high velocities (7-8km per second) and speeds you’re travelling at in orbit, even something such as a small screw can have a significant amount of kinetic energy. If that hits your satellite it can really ruin your day.’

July 1996 A piece of debris from an Ariane rocket stage collides with the French Cerise military satellite, cutting in half the spacecraft’s 20ft (6.096m) long gravity boom

January 2007 In a ballistic-missile anti-satellite test, China shoots down its own FengYun 1C satellite. The impact produces more than 2000 pieces of new debris

March 2008 Russian Cosmos-2421 surveillance satellite explodes. Russia disputes claims from the West that this was due to a self-destruct command

February 2009 The Iridium 33 communication satellite is destroyed on collision with Cosmos 2251, a 900kg retired Russian satellite, 788km above Siberia. The 7km/s collision produces hundreds of pieces of trackable debris

The problem is compounded by the fact that space debris does not behave in a particularly predictable manner. The collisions or explosions that generate the debris impart a slightly different velocity and angular inclination on every single particle and it is not always possible to model the resulting erratic orbit with much accuracy. It was just this uncertainty that caused the ISS crew to scamper for cover last year. What’s more, the frequency of these collisions appears to be on the rise. ’Our models show that the number of collisions is going to increase,’ explained Dr Hugh Lewis, a space-debris expert at Southampton University. ’We expect to see 5-10 collisions in the next 50 years and each one will generate a large number of fragments.’

Matthew Perren, head of innovation at Europe’s largest space company, EADS Astrium, agrees that something needs to be done. ’This is a serious business issue for satellite operators and providers,’ he said. ’We have to be in a position where we can take evasive manoeuvres, but there’s a lot of information and modelling needed. Being able to monitor and track ever larger amounts of debris and then predict its orbit so that we can take an evasive manoeuvre is a highly complex piece of computation – we need to bring down the size of debris that we can detect, monitor and track.

More accurate predictions giving improved guidance to operators on when to take evasive action will undoubtedly help; but they won’t provide a complete solution. Many satellites still don’t have any form of propulsion – and for those that do, a decision to fire the boosters can have a major impact on the satellite’s useful life. Indeed, despite the Iridium incident, many operators would still, it seems, rather flirt with the possibility of collision than add costs to their operations.

Another approach is to deploy some kind of shielding, but again there are major cost implications. The systems currently deployed on manned spacecraft are heavy, and if deployed on satellites, would lead to huge increases in launch costs. According to Qinetiq’s Saunders, ongoing research into lighter shielding materials such as open-cell metallic foams could provide a more attractive shielding solution in the future, but for now shielding is only likely to be heavily used on manned space missions.

A far more sustainable approach to the problem is to actually reduce the amount of stuff in space and here there is concerted international action. Guidelines for satellite operators now contain a 25-year rule: to get a licence to put a satellite into low-earth orbit, the spacecraft must be designed to re-enter the Earth’s atmosphere within 25 years. Similar rules stipulate that satellites in a geo-stationary orbit are boosted to a higher altitude ’graveyard’ orbit at the end of their lives.

Typically, operators would achieve this using their boosters. However, engineers at EADS Astrium are developing a novel passive solution that could one day be used by satellites that are not equipped with a propulsion system. The novel aerobraking sail concept features a deployable folding sail designed to speed up the deorbiting process by exploiting the tiny amounts of aerodynamic drag experienced at altitudes of up to 750km. According to Perren, the technology, which will eventually be used on the French Space Agency’s microscope mission, will soon be demonstrated on a University of Surrey-developed Cubesat.

Whatever approach operators choose to speed up this process, there is certainly a strong incentive to comply. ’Operators realise that a slot in geostationary orbit is a valuable piece of real estate,’ explained Saunders. ’If they just leave their dead satellites to float around then not only do they put other satellites at risk but they are also affecting their own future.’

But opinions are divided on whether this is sufficient. A growing body of scientists believe that a tipping point has been reached and that even if all launch activities were to cease, collisions between existing space objects will lead to a continued increase in the amount of orbital debris. First postulated by NASA scientist Don Kessler, this orbital avalanching effect has become known as the Kessler syndrome and Lewis believes current evidence confirms Kessler’s theory: ’Our results, NASA’s results and results from around the world are showing that this is indeed what is happening.’ 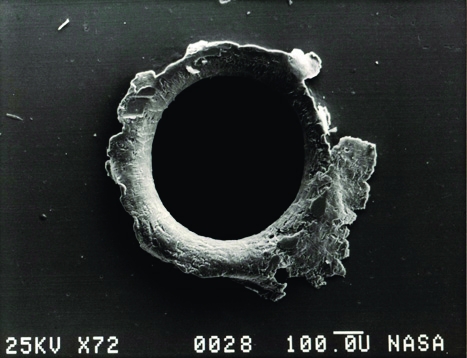 Against this worrying backdrop, avoidance, shielding and swifter deorbiting are unlikely to have much of an impact. And the idea of some kind of cosmic cleanup is beginning to be seen as the only way in which the environment could be stabilised. It sounds far-fetched but the call for action is repeated from the corridors of academia to the top of the space industry. ’It’s a serious problem,’ added Perren. ’We’re not making things better with the current technology, so we need to look at active removal of existing debris.’

Perren declined to comment on what kind of systems EADS Astrium is looking at, but a range of ’active debris removal’ methods has been proposed – from scarcely believable ground-based directed-energy weapons that could be used to vaporise chunks of space junk, to more plausible passive solutions.

Dr Lewis is excited about the potential development of a giant passive debris sweeper, a spacecraft with a large surface area that can absorb clouds of smaller debris. For larger objects, the technical challenges would be more significant. ’Something with a mass of five metric tonnes doing a relative speed of 10km per second has an enormous amount of kinetic energy,’ said Lewis. ’Somehow you’ve got to rendezvous with this object, capture it, then either put something on it like a propulsion system or remain attached to it and drag it down. There’s one vehicle designed to do this kind of thing and that’s the Space Shuttle.’

And the astronomical cost and technical difficulty of such a project would arguably be dwarfed by the political problems it would present. ’Even though an object may be classed as space debris it still belongs to the launching state,’ explained Lewis. ’Imagine if the US launched a mission to remove a derelict Russian spacecraft. From a political point of view, if you can remove a debris object, what’s to stop you removing an active object? There are all sorts of issues that need to be resolved before this can really start to happen.’

UAVs could be a cheaper alternative to satellites in many applications

With engineers looking for methods of reducing orbital overcrowding, high-altitude long-endurance UAVs, capable of flying at stratospheric altitudes for days on end, could replace satellites in many communications applications.

Currently used for military surveillance applications, such systems are cheaper to launch and can be simply and quickly brought down to Earth for regular maintenance.

’These areas of technology will become more attractive as space becomes more busy,’ said Qineitq systems engineer Chris Saunders. ’It is cheaper and you don’t have the worry of whether it’s going to collide.’