Mobile laser scanning technology developed  by Renishaw is at the heart of an effort to create a detailed digital model of Scotland’s three iconic bridges over the Forth.

The £300k project – launched to celebrate Scotland’s industrial heritage – covers the Firth of Forth Rail Bridge, the  Forth Road Bridge and the soon-to-be-complete Queensferry Crossing. The data acquired will be used to help maintain the bridges as well as to generate animations, fly-throughs and educational materials.

In an effort to determine the best technology to use for the task, the Centre for Digital Documentation and Visualisation (CDDV), a collaboration between Historic Scotland and The Glasgow School of Art, asked Renishaw to use its mobile  laser scanning technology to conduct a survey of a section  of each bridge.

Laser scanners capture data by firing a laser beam from  a scanner at a solid surface and using the reflected laser beam to make rapid and highly accurate distance measurements. Each of these measurements, or data points, is used to form a ‘point cloud’, a collection of measurements that can be used to create extremely accurate 3D models of whatever is being scanned. As the process effectively operates at the speed of light, it has huge advantages over many traditional surveying techniques.

The project posed a number of challenges: the need to capture fine detail of such complex structures meant that vessel-based scanning was a necessity, yet high traffic on the riverway, and tidal patterns that limited access to the underside of the bridge to specific time windows, required careful planning.

The area is also renowned for poor global navigation satellite system (GNSS) coverage, which is essential for the laser scanner positioning and navigation, and the safety risks involved in sailing too close to the bridge were additional factors that Renishaw was able to mitigate, using its two decades of experience in 3D laser scanning.

During the project planning stage, Renishaw’s spatial measurement team used tidal charts, navigation charts and studies of GNSS windows to plan the optimal time to carry out the data acquisition. 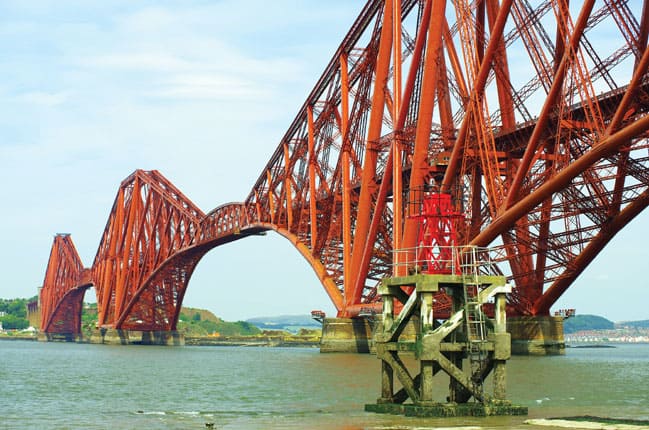 The team chose a Trimble MX2 single-head laser scanner to undertake the laser scanning, installing the system on the front of a coastguard rescue boat.

The onboard GNSS-aided inertial navigation system provided the position and orientation of the scanner at any given moment to a high degree of accuracy, and as each model is factory calibrated, installation is quick. This meant that as much of the team’s time as possible could be spent gathering data.

The use of a single-head unit – which captures less data in a given time period than a dual-head scanner, but is more suitable for marine applications due to its increased lateral range – meant that the boat needed to zig-zag up the river in order to ensure coverage of the full site.

Renishaw’s team (which has also worked with Historic Scotland on the mapping of Kisimul Castle in the Outer Hebrides) took just one day to complete the scanning work and CDDV is now planning to carry out further laser scanning of the bridges and their environment.

Meanwhile, a team led by researchers from the University of Exeter in the UK are currently gearing up to use drone-mounted laser scanners to fly above the Amazon rainforest and peer through the canopy to look for signs of ancient civilisation.

More recently, structural engineers from the University of California used laser scanners  to conduct a structural ‘health assessment’ of the Baptistery of St John, an 800-year-old basilica in Florence, Italy.

Using a combination of  LiDAR laser scanning, ultra- high-resolution photography and thermal imaging, the team constructed a detailed 3D model of the interior, exterior and façade of the structure.

The project has revealed a far more detailed understanding of the ancient building than was previously possible – and has provided critical data that’s expected to inform the long-term stewardship of Baptistery.

Drying the Forth Road Bridge