If you’ve ever been in an electric race car, you’ll know that the almost instant torque and acceleration can be just as breath-taking as the gas-guzzling roar of a Formula One engine. But to die-hard fans, electric racing can be a hard sell. Without the thunder of the internal combustion engine and the reek of gasoline, many race goers say the sport just isn’t the same.

That’s a view that the new FIA Formula E Championship is hoping to change next year. The first all-electric auto racing series will start September 2014 and run through to June 2015. Ten teams, each with two drivers, will compete against each other over the course of an hour, racing through the streets of some of the world’s most impressive cities, including London, Berlin, Rome and Rio de Janeiro.

All teams will be required to use a common chassis being developed by Renault together with Spark Racing Technologies. Named Sark-Renault SRT_01E Formula E, it will feature technology from a range of different companies, many of whom are also involved in Formula One. Earlier this month, the Formula E racing car was unveiled at the Frankfurt motorshow providing a better look at what we might expect.

Once the championship has got of the ground, the organisers will make Formula E an open series in its second year. This means that each team will be free to develop its own car,
with whatever configuration of electric motors, batteries and charging systems that they believe will give them the biggest advantage in the race.

‘It is going to be brilliant seeing these cars racing through the centres of iconic cities’ said Peter van Manen, managing director of McLaren Electronic Systems, whose group has provided the electric motor, transmission and electronics for all the first-year cars. ‘Electric motors produce almost instant torque and acceleration delivering both performance and efficiency. We can look forward to some exciting racing.’

The motor and power electronics began development four years ago and have been the focus of intensive research and testing ever since. The electric motor drives the rear wheels of the racing car via a four-speed sequential gearbox. The motor is much smaller than an internal combustion engine at only 26kg and provides more than 250hp. Torque delivery is almost instant, giving the powertrain extremely fast acceleration.

According to McLaren, the electric system has the highest power-to-weight ratio of any automotive motor in the world. When the driver takes his foot off the pedal, the electric motor acts as a generator, providing engine braking and charging the battery at the same time. The motor turns at speeds up to 17,500rpm, which is similar to that of the V8 Formula One engines.

‘Elite racing cars are extremely intelligent these days, they are transmitting vast streams of data back to team engineers and their torque and energy use is controlled using sophisticated ECUs [engine control units],’ said van Manen. ‘The Formula E cars will be no different, giving the teams both data and the capacity to implement unique race set-ups and strategies.’

The energy for the electric motor comes from lithium-ion batteries — the same technology that is used in laptop computers — which are located behind the driver within the carbon safety cell. The flow of energy between the battery pack and the electric motor is controlled by motor-control electronics. All of the electrical systems operate at very high voltages, up to 800V.

The electric motor and controller provides a better power to weight performance than any other automotive electric motor in the world today according to van Manen. ‘That makes it unique,’ he said. ‘The challenge for any new racing design is delivering performance, while ensuring quality and safety, in too short a time. Formula E is no exception.’

The electric motor and control electronics are evolutions of the parts originally created for the McLaren P1 hybrid sportscar. In the P1, however, the electric motor supplements performance and efficiency of the turbocharged internal combustion engine. The engine control unit that manages the powertrain is the same unit that controls all the IndyCar engines
in the US, but with different software.

The group has already conducted thousands of miles of motor testing in the lab ahead of the season. It claims to have so far clocked up the equivalent of two seasons of racing in testing. According to van Manen, the biggest challenge with the electric motor and control electronics has been managing the heat and high voltages. Making things smaller means little thermal mass and so heat-sink design and cooling needs careful attention.

‘We did this with clean system architecture, good design, thorough testing and by using proven parts and technology, whenever possible,’ said van Manen, who added that the engine’s range was a major limitation.

‘Batteries are still heavier than a tank of petrol or diesel and so the number of miles the car can race is less than more conventional open-wheel racing cars, he said. ‘In the first year of racing, drivers will switch cars halfway through the race to spice it up. Battery efficiency and range is improving all the time and we will see faster and wireless charging emerge in the future, so range will progressively increase.’

Van Manen said fans could expect to get closer to the action in the upcoming season. Acceleration and braking with be severe, testing drivers’ skill and nerve. The powertrain has its own characteristic sound, which Van Manen says is in fact very loud and just as exhilarating an the noise of a combustion. If all goes to plan, Formula E, could be just what the automotive industry needs to convince the wider public that electric cars can be both sustainable and exciting. 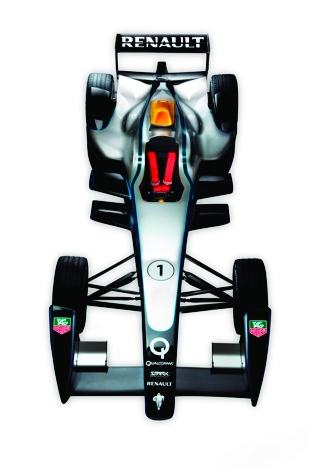