Full speed ahead: careers in the UK motorsport sector

The motorsport industry offers a plethora of exciting projects and challenges for engineers.

Across the scenic landscape surrounding the West Midlands, a burgeoning  race industry has emerged attracting engineers the world over. Dubbed Motorsport Valley, this once quiet part of the country has now become known as the ‘jewel in the crown of British engineering’ contributing £9bn to the UK economy.

“Britain’s reach is truly global where motorsport engineering and technology is concerned,” said Clive Temple, programme director of Advanced Motorsport Engineering at Cranfield University. “The sector embraces  a wide range of companies from the well-known teams to small but dynamic companies providing a plethora of engineering services.”

The world-leading industry had an unlikely beginning in the 1950s, when after the Second World War Britain was left with more airstrips and engineers than ever before. With aerospace expertise and a fierce competitive streak,  these engineers began turning their hand to car racing. Today, their legacy for innovation lives on in the 4,300 UK businesses operating  in the sector.

Overall, the UK motorsport industry sustains almost 41,000 jobs, around 90 per cent of which export globally. Many of them are in Motorsport Valley, which more specifically describes an area roughly 80 miles wide stretching from the south west of Birmingham to Norwich. Larger teams, such as Mercedes and Red Bull, employ around 700 people in the area, while teams such as Force India have about 300 employees.

A recent review of the UK motorsport sector by the Motorsport Industry Association (MIA) found the sector recorded £9bn in sales during 2012 compared with £4.6bn in 2000. Spend on research and development is currently at 25  per cent of sales turnover, and opportunities for engineers in the sector are growing. Last year, eight of the 11 teams racing in Formula One (F1) were based in the UK, including McLaren, Red Bull, Lotus and Mercedes.

“But there is much more to motorsport than F1,” said Temple. “There are all the component suppliers and manufacturers too. Interestingly, a valuable segment within motorsport is the historic side as borne out by the interest in events such as the Silverstone Classic and Goodwood meetings. And it’s not just on track and on four wheels. There is off-road and two wheel, even three-wheel motorsport.”

For engineers hoping to carve out a career in the UK motorsport industry, there are a range of opportunities. From office-based jobs, designing and testing parts for cars using CAD/CAM software, to working in the supply chain, providing complex and often secretive parts to race teams who require rapid turnaround times. “Often, the smaller the team the more responsibilities the engineers have as they have to do several jobs at one time,” aid Gemma Hatton, a course representative for Advanced Motorsport Engineering at Cranfield University.

In fact, around 35,000 people are not directly employed by racing teams, but work in smaller companies within the supply chain. According to Chris Aylett, chief executive of the Motorsport Industry Association, one of the best routes into the motorsport supply chain is through technical apprenticeship. Practical skills that can be proven are key, but so are team working, management and presentation.

And anyone working in the sector has the challenge of keeping the sport relevant.  For instance, with a focus on energy-efficient technologies, engineers are facing a fresh set  of challenges. “Opportunities are changing,” said Temple. “Take the Mercedes-AMG high- performance powertrains activity at Brixworth. These are now powertrains, not just engines  as they were once described.

“There is the integration of energy recovery systems and the Northamptonshire-based operation is linked into the heart of Mercedes in Germany – driving its research and development. Environmental considerations are  a real dynamic in motorsport with disruptive technologies to the fore. Formula E exemplifies this and so does hybridisation of Le Mans prototypes that run in endurance racing.”

As a result, there is far more scope for engineering innovation. The 24 hours of Le Mans, for example, has an entry called ‘Garage  56’ in which a team does not have to comply with the standard regulations and so can develop a ‘concept’ car using new innovative technologies. Nissan did this last year with the ZEOD, and before that the Deltawing revealed its radical energy-efficient design that looks like  a cross between a fighter jet and a batmobile.

‘Motorsport is a niche industry, and once you are in everyone knows everyone or every team is linked to another in some way – it really is a small world,’ said Hatton. ‘My main advice to anyone considering a career in the sector would be to get yourself to racetracks, always do a good job no matter what that job is, never upset anyone because word spreads quickly and always say yes to any opportunity.’

Many skills are transferable and innovation from designing and building a winning car can be used in other sectors. For instance, McLaren Applied Technologies (MAT) is using some  of the lessons learned from F1 in other industries such as healthcare, as well as other sports, such  as cycling, rowing and skeleton. Meanwhile, Williams has taken motorsport expertise into sectors such as public transport, helping create energy-efficient technologies. 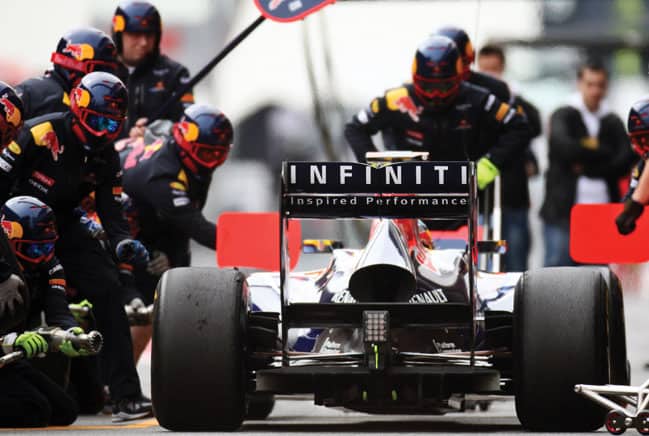 “There are so many exciting projects and challenges for engineers that go beyond simply designing, manufacturing and engineering racing cars and bikes,” said Temple. “You will need to be academically strong where maths and physics are concerned. These two subjects are key to developing an understanding of engineering and then applying your engineering expertise in a practical way. You will need to be articulate, able to present your ideas and secure ‘buy-in’ for your innovative ideas.

“Importantly, no one has ever won a ‘real- time race’ from an armchair. Get out there  and get involved.”

Learn how to write the perfect engineering CV

Careers in the UK nuclear sector

Careers in the civil aerospace sector