Cambridge spinout Protolaunch is developing a throttleable rocket engine for smallsat launches that may one day also be used for a lunar lander. Andrew Wade reports.

Protolaunch's thermal cycle allows for the use of fuels such as ethanol, which can be derived from non-fossil fuel sources - Protolaunch

Across the world, the small satellite market is booming. According to the UK’s Satellite Applications Catapult, around 1,500 smallsats were launched in 2021, with more than 2,000 expected to lift off in 2022. Many of these are part of enormous comms constellations for OneWeb and SpaceX, launched by the dozen atop large, heavy-lift rockets. But there is also a growing number of boutique smallsat operators looking to tap into the orbital goldrush, and for these companies, launch options can be elusive.

This is where Protolaunch comes in. The Cambridge spinout, formed in 2019, is building an entirely new rocket engine, designed from the ground up specifically with smallsats and microlaunchers in mind. According to CEO and co-founder Matt Escott, Protolaunch is taking an entirely new technical approach, simplifying the rocket science by embracing a thermodynamic cycle that negates the need for turbomachinery.

“We’re trying to fit into that middle category where we’re scaling down a turbopump engine, but when you try and scale down a turbo pump it gets really complicated really quickly,” Escott told The Engineer. “So if you can get rid of the pump without sacrificing the performance – that’s what we’re trying to do.”

Often described as the heart of rocket engines, turbopumps are complex machines that combine rotodynamic pumps with gas turbines to deliver highly pressurised propellants and oxidisers into a combustion chamber. The Space Shuttle Main Engine had turbopumps that spun at over 30,000 rpm, shifting 68kg of liquid hydrogen and 406kg of liquid oxygen every second. They are a vital – and costly - piece of equipment for large rockets to deliver a lot of oomph. For smaller systems, however, they are neither commercially nor physically practical.

“As you try and make a turbopump smaller, you come across this fundamental problem: you’ve got to spin it faster,” explained Escott. “You’re already on the limit of what materials can do in these large pumps, so as you make them smaller, they just don’t work.” 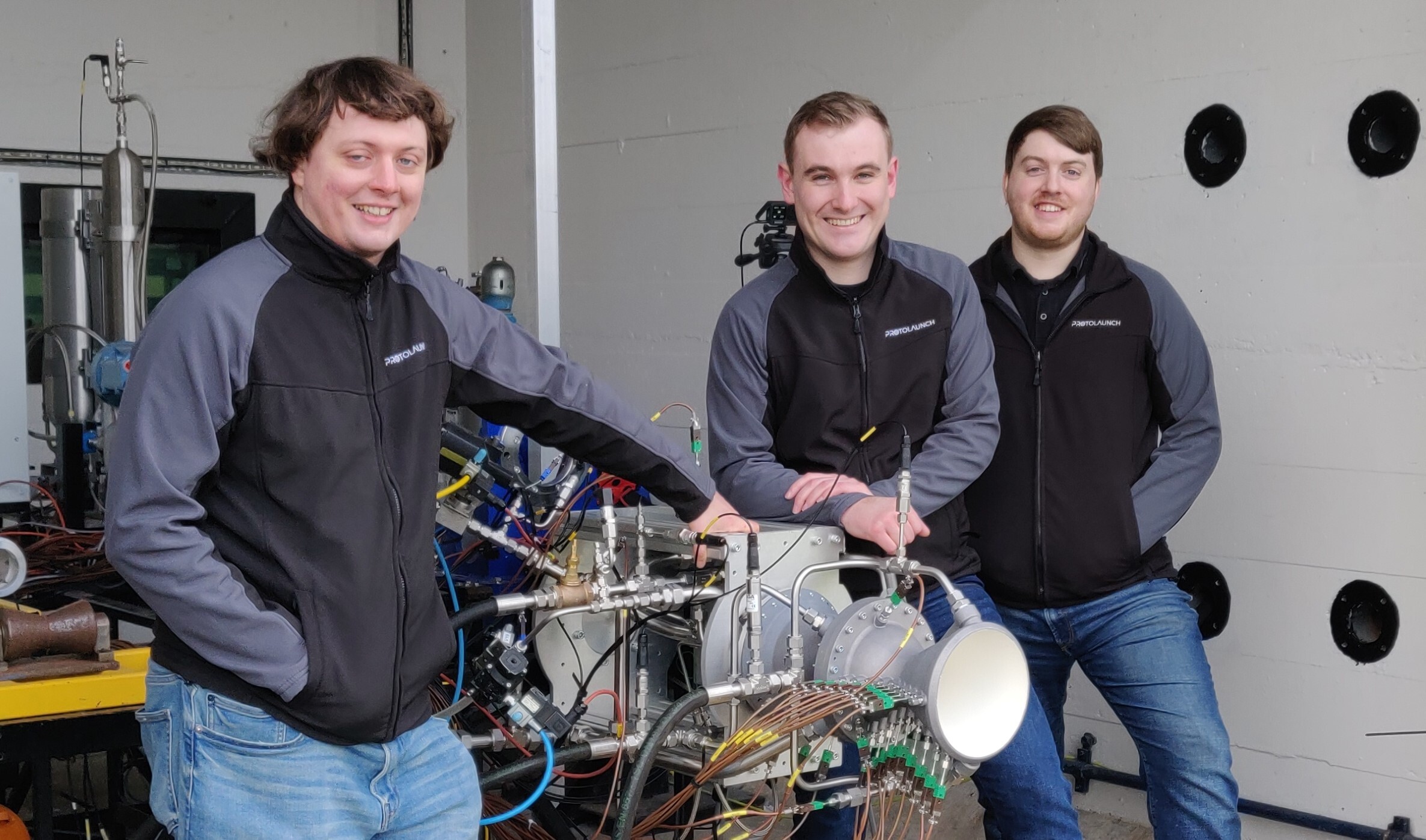 In the absence of turbopumps, Protolaunch’s patent-protected core technology operates at much lower pressures than traditional rocket engines and features significantly fewer moving parts. The tail end of 2020 saw the startup run a successful hot-fire programme for its current testbed platform, HILBERT, at the company’s Westcott base. HILBERT was developed with a nominal operating point designed to produce 10kN of thrust and incorporates both additive and traditional manufacturing techniques, a blend which allows cost and complexity to be managed while at the same time facilitating novel features that could not otherwise be achieved.

“We love additive,” said Escott. “We’re using it because it lets us manufacture parts that we couldn’t from any other system. We have internal flow paths within our actual engine where we are running fluids through to actively cool the engine while it’s combusting. It’s very, very difficult, arguably impossible, to do that through other manufacturing techniques.”

For Escott and his fellow Gen-Z co-founders Matt Coates and Jack Brewster, sustainability is another crucial point of innovation. While not exactly noted for its green credentials, the space industry will have to adapt in the years ahead if it is to survive, and the launchpad is the obvious place to start.

Protolaunch’s thermal cycle allows for the use of fuels such as ethanol, which can be derived from non-fossil sources. On top of this, it is easy to handle, particularly when compared with substances such as hydrazine, a highly toxic chemical used for both rocket fuels and in-space propellant. Hydrazine rockets are currently not permitted to launch in Europe without an exemption and its use has already been outlawed at the various UK spaceports preparing for their maiden launches this year.

“If you look at hydrazine the wrong way, it will give you cancer,” Escott said, only half-joking.

Alongside ethanol as a fuel, Protolaunch is exploring things like high test peroxide for its oxidiser. According to Escott, the combination is much greener than kerosene. However, ethanol is less energy dense than kerosene, which presents engineering challenges. 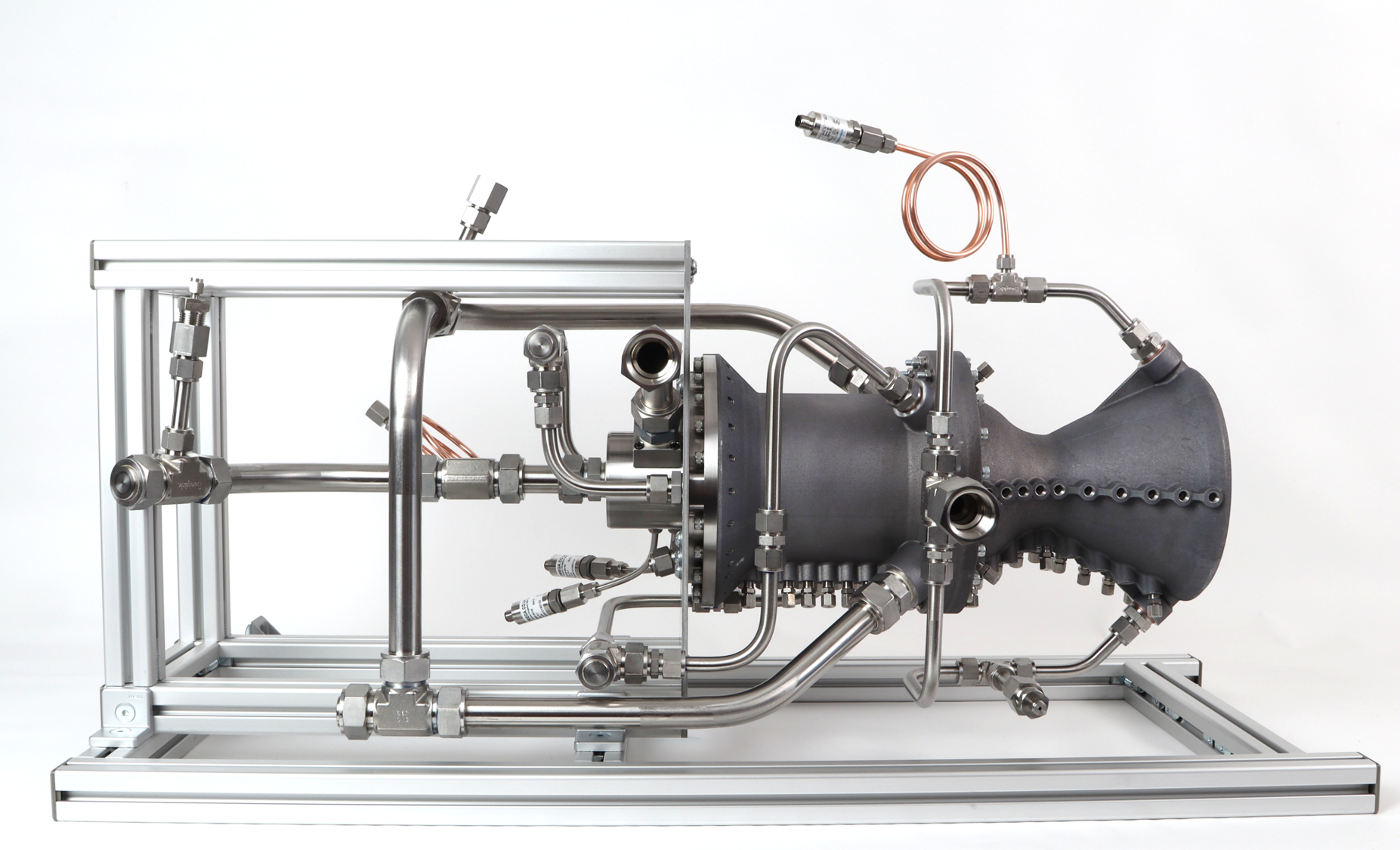 The HILBERT test engine demonstrator has been successfully hot-fired - Protolaunch

Having previously secured backing from the European Space Agency (ESA), Protolaunch was recently announced as one of 13 recipients of UK Space Agency funding for a diverse range of projects. An award of £194,000 will go towards the development of a throttleable engine for lander applications, a system to allow spacecraft to land on other worlds.

“So if we want to go to the Moon – it’s not going to happen tomorrow, but it is something that’s part of the UK space strategy – one of the things you need for that is an engine that you can throttle down. And that’s what we’re working on,” said Escott.

“You can imagine if you’re in a lander and as you’re burning fuel your craft is getting lighter, but you need to be able to effectively hover, so you need to be lowering your throttle continuously.”

The fundamental science behind this type of throttle technology was of course first visited back in the 1960s during NASA’s Apollo Program, but has somewhat fallen out of fashion since humans stopped visiting our lunar satellite. In the intervening decades, our mastery of space has tended to focus on the other breed of satellite, the ones that provide communication and navigation services and beam live TV into our homes from the other side of the world.

Launching these satellites into various Earth orbits is its own challenge, but it is one quite far removed from landing Armstrong and Aldrin on the Moon, or indeed the new engine technology that will hopefully soon repeat the feat.

“But a lot of these business models are going to need something in that mid-range, and that’s what we want to plug.”

Developing the technology that could put the first UK boots on the Moon is a daunting prospect, especially given the age profile of Protolaunch and its young founders. But it’s a challenge Escott and his Cambridge colleagues are relishing, and one which they believe their core technology and its roadmap is well suited to.

“We see landers and in-space manufacturing being really huge markets, but they’re probably 10-15 years away,” said the CEO. “The steps towards that are all about in-space mobility.

“Because the backbone of our system is the fact we can throttle, we’re very much positioning it so that the minimum throttle position of HILBERT is useful for today’s markets, and that as these markets mature, we have higher thrust systems ready to go which no one else has on the market.”

More on UK space technology from The Engineer

Out of this world: How Welsh firm Space Forge plans to take manufacturing off-planet