One of the biggest complaints about hybrid and electric cars, whether the problem is real or imagined, is that they don’t perform as well as traditional petrol vehicles, don’t feel the same to drive or don’t respond quickly enough when you put your foot down. Now a £3m project part-funded by the Technology Strategy Board (TSB) is aiming to change that by developing technologies to make a small but fuel-efficient engine feel like a much bigger one. 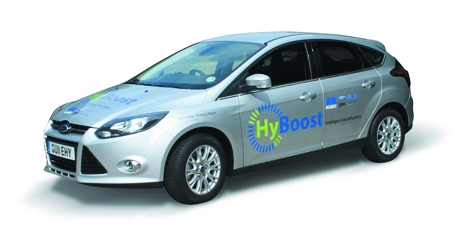 The problem with using such a small engine in a relatively large car is that it leads to an increase in turbo lag the time the engine needs to change speed when you put your foot down. To counter this, the Hyboost team used a VTES electric air compressor or supercharger developed by Controlled Power Technologies to give the engine an extra boost for the few seconds it was needed while the turbocharger was kicking in.

’We use the electric boosting device to give it a similar feel to a much bigger engine,’ said King. ’Even though it’s a one litre engine it makes very good torque and power, but to make it feel like a bigger car you need that instant response and that’s what the electric supercharger does.’

The power for the supercharger comes from a regenerative braking system, the technology used by most hybrid cars to generate electricity by feeding the vehicle’s kinetic energy into a generator. This electricity is then stored in ultracapacitors, which can be discharged and recharged much faster than most batteries and are much cheaper, before being delivered to the supercharger as needed.

This microhybrid system, a StARS 12+X model developed by Valeo, also performs another important function. Mounted on the belt on the front of the engine, it replaces the alternator and starter motor with an integrated starter generator, meaning that at lower speeds it feeds the electricity back into the engine, adding another seven to nine per cent improvement in fuel consumption.

’Really it’s a way of getting the lowest CO2 figure by using this electric machine primarily to absorb power when you lift your foot off and put power in when you put your foot down,’ said King.

The big engineering challenge for Ricardo was in combining all these systems together, he said. ’Sitting on top of [the engine and electrical architecture] is a controlling strategy that schedules when the microhybrid functionality should work, combined with the electric supercharger, and combined with the boosting system that’s on the engine anyway, the fixed-geometry turbocharger.’

Although the project is due to end in December, part of the TSB funding agreement was that the partners would put together a five-year plan of how to promote these technologies, which are all nearly production-ready. ’Bringing all this technology together gives us a low-cost alternative to a hybrid with the same kind of fuel consumption but superior drivability and performance at a much lower cost,’ said King. ’And you don’t need to use batteries that are bad for the environment, require lots of power to be produced and that cost an absolute fortune.’

As an extra part of the programme, the European Advanced Lead Acid Battery Consortium (EALABC) is developing a low-cost lead acid battery suitable for hybrids that has a lower cost than ultracapacitors but a superior performance. As a lead acid battery it can store lots of energy, but it also has the fast discharge rates of ultracapacitors and the robustness of nickel metal hydride batteries, without the high environmental costs associated with nickel or lithium mining. This could be applied to the Hyboost system to reduce its costs and allow even more energy to be regenerated and stored by the electric architecture.

Ford has yet to decide whether to put any or all of the technology into its cars the Hyboost vehicle that has been produced is just a demonstrator. But there’s a good reason why they and other companies would be interested in doing so. Next year, the EU is scheduled to bring in penalties for car manufacturers depending on how much CO2 they produce. By 2015, this means companies such as Ford will have to pay €95 (£83) on each car for every gram per kilometre of CO2 they emit above an average of 130g/km, measured on the European Drive Cycle.

Given that the Hyboost technology has an estimated cost to manufacturers of €500 per vehicle and can cut the 2009 Focus’s CO2 output from 169g/km to 99g/km, it wouldn’t be surprising to see companies investing in the system, or others like it, rather than paying hundreds of euros in fines. ’This technology is relatively low cost and actually brings the CO2 down quite a lot, so the cost the manufacturer will save by not having to pay the penalty is considerably more than the oncost of the technology,’ added King.

Hyboost isn’t just for mid-size cars such as the Focus, he added. ’It’s a technology that is scalable. It’s actually beneficial going into bigger passenger cars because it’s a good enabler for engine downsizing, which means you can fit smaller engines in bigger cars and have no perceived reduction in drivability. We have looked at it in cars as big as a Range Rover you put a much smaller engine in there and still have the same kind of driving feel.’